in Columns, Domestic Policy Program, In the Media, Inside Policy, Justice, Latest News
Reading Time: 7 mins read
A A 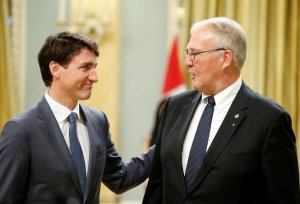 When Prime Minister Trudeau shuffled the federal Cabinet on July 14, the entire country was taken by surprise when Bill Blair was named as the new Minister of Border Security and Organized Crime Reduction.

At the time, Blair was serving as the Parliamentary Secretary to the Minister of Justice and had been placed in charge of the Government’s challenging initiative to legalize possession and use of marijuana. As such, Mr. Blair had to work with several different federal Ministries as well as both Provincial and Municipal governments and with Canadian police organizations, the Royal Canadian Mounted Police (RCMP), Canada Border Services Agency (CBSA) and US officials who understandably were (and are) concerned about cross-border smuggling.

By all accounts, Mr. Blair did an exemplary job of working with the multiple stakeholders to identify and ‘solve’ the many issues involved with marijuana legalization. He was apparently supported in this task by officials from Public Safety Canada’s Border Strategies and Law Enforcement Division, who are quietly recognized as skilled policy people that understand and prioritize operational results.

Mr. Blair’s success on the marijuana file was no doubt a significant factor in his being chosen to handle this new responsibility. It is also clear that his lengthy career of law enforcement, including as the Chief of the Toronto Police Service and President of the Canadian Association of Police of Chiefs, was also instrumental in his selection for this new role. As someone who has been involved in the national law enforcement and public safety world for over 25 years, I can say without hesitation that Bill Blair has a deserved reputation as a person that gets things done. That’s encouraging given the importance of his new mandate, which was only released by the Prime Minister’s Office (PMO) on August 18, five weeks after his appointment.

The Trudeau government should be congratulated for making Ministerial mandates public which increases public awareness and accountability. Providing clarity on Minister Blair’s new mandate is especially important in light of the highly unusual and unprecedented subjects-specific mandate of the new Minister and the clear political importance of the assigned duties.

The Trudeau government should be congratulated for making Ministerial mandates public which increases public awareness and accountability.

The absence of a specific mandate following Minister Blair’s appointment created multiple questions and awkward situations as people tried to figure out exactly what he would be responsible for and if, for example, the CBSA and RCMP’s border and organized crime units would be reporting to him. It was also unclear if an entirely new Ministry, and supportive bureaucracy, was to be created. It is now confirmed that Minister Blair is part of the Public Safety Ministry but will operate as a separate Minister with his own defined mandate.

The unusual specificity of Minister Blair’s new portfolio is a reflection of the current political priority of border security and the dramatic increase in urban guns and gang violence, which is linked to illegal drug smuggling and trafficking. The federal government is rightly concerned about the voter impact of these issues in the upcoming 2019 election and recognize that claiming there is no ‘crisis’ of people entering Canada illegally or the solution to illegal gun violence is more rules for legal gun owners is not an effective strategy.

By appointing a person with Bill Blair’s background, the Government clearly hopes to change the channel on these issues and retrieve the public confidence that it is capable of taking effective action, which not been the case with Immigration Minister Hussen and Public Safety Minister Goodale to date.

Minister Blair’s mandate letter was made public on August 18 and it contains eight remarkably specific assignments. These include:

These eight detailed assignments will require informed analysis of current situations to develop operationally effective changes to help achieve the stated outcomes. Because of the nature of the issues, this will also require meaningful consultation and cooperation among all three levels of government. As Minister Blair himself has noted since his appointment, there is no single solution. It is encouraging that the Minister tasked with these goals appreciates that reality.

It is also important to appreciate that the areas of border security, fighting drug smuggling and guns and gang activities are almost always inter-connected in one way or another. Hence the need for the multi-Ministry, Agency and government authority granted to Minister Blair. While that complicates things, the good news is that actions taken in one area can have positive impacts on others.

In light of this complex situation, the following actions should be considered to achieve the Minister’s new mandate.

The Minister should deliver on the long-promised Canada-US enhancement of border domain awareness through joint procurement and deployment of advanced surveillance technologies, including sensors and automated analytical radar systems. These technologies were first promised in the Beyond the Border Action Plan, followed by the RCMP’s Anti-Tobacco Smuggling Plan and the Border Integrity Technology Enhancement Project (BITEP), but remain undelivered.

This intelligence-led approach will greatly improve our cross-border interdiction and enforcement capabilities and reduce gun, drug and people smuggling. Such a deployment will also have an added benefit – by enhancing marine critical infrastructure security as well as marine port security and Transport Canada’s Trade Corridor and Ocean Plans Protection goals.

This intelligence-led approach will greatly improve our cross-border interdiction and enforcement capabilities and reduce gun, drug and people smuggling.

The Minister needs to work with US officials to modernize the Safe Third Country Agreement and remove the current exceptions for persons entering either country (illegally) between ports of entry or who are from visa free countries. He should also develop expedited refugee claim determination and removals of failed claimants as well as a joint Canada-US operational program to interdict, detain and remove illegal border crossers that are inadmissible on criminality or security grounds or already subject to a removal order in either country. In addition, federal legislation should be amended to expedite the removal of criminally convicted non-citizens from Canada.

The Minister should work with local law enforcement to improve source identification of firearms used in crime and assess how criminals are illegally gaining access to domestically-owned firearms. Regulatory measures that should be examined to address this challenge include: ensuring the security of the firearms registry database; prohibiting owner address availability at firing ranges; requiring notification of defined volumes of firearms possession and authorizing compliance checks; requiring reporting of all firearms transactions; and restricting ammunition acquisition in defined circumstances.

Two sections of the Criminal Code need to be amended: s. 719 should expressly authorize no pre-trial custody credit in cases where the person has a previous record of a gun, gang, drug trafficking crime or was on bail at the time of commission of such a crime. And s. 743.6 should expressly authorize reduced parole eligibility for persons convicted of gun, gang or drug trafficking-related crimes. Federal funding should also go towards enhanced supervision, including electronic monitoring, of persons released from custody on gun, gang or drug trafficking-related crimes.

Lastly, the Minister should work with the US to get China to take real action to stop the production and export of fentanyl and carfentanyl from China.

These are challenging issues of immense public importance. The cross-border issues will be especially challenging given the current political climate south of the border, which is why the selection of Bill Blair for this unique and precise Ministerial mandate is so encouraging. It’s time for informed and effective action.

Scott Newark is a former Alberta Crown Prosecutor who has also served as Executive Officer of the Canadian Police Association, Vice Chair of the Ontario Office for Victims of Crime, Director of Operations for Investigative Project on Terrorism and as a Security Policy Advisor to the governments of Ontario and Canada. He is currently an Adjunct Professor in the TRSS Program in the School of Criminology at Simon Fraser University.