in In the Media, Latest News, Multimedia
Reading Time: 2 mins read
A A 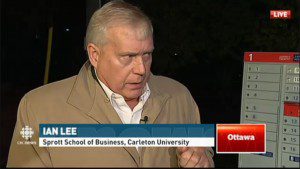 It may have been a campaign promise, but Macdonald-Laurier Institute author Ian Lee says the newly-elected federal government would be wise to reconsider reinstating door-to-door delivery.

“The problem is Canada Post is not in a steady state”, Lee said in an interview with CBC Ottawa.

Resuming door-to-door delivery is “going to create a much bigger problem than letting (community mailboxes) go through”, says Lee.

Canada Post is facing a problem that won’t go away: People are sending less mail at a time when the number of addresses it needs to serve is growing.

But now that those plans are on hold, Canada Post is facing uncertainty about how to make up the difference.

That leaves the government with two options, says Lee: Draw from government revenues, or jack up the price of what it costs consumers to send mail.

“I predict traditional mail will vanish”, Lee told CBC News online. “Canada Post’s future, if it has one, is in parcels, not letters”.

Lee also spoke with Global TV, the Ottawa Citizen, the Toronto Star and several CBC radio stations across the country.

Lee is the author of the MLI report “Is The Cheque Still In The Mail?“, which argues that Canada Post will need to go further than just community mailboxes if it wants to be viable long-term.