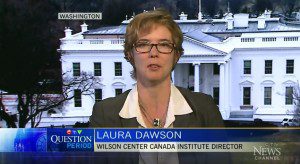 This week’s state dinner for Canadian Prime Minister Justin Trudeau in Washington is an ideal opportunity for Canada and the United States to make progress on common goals in energy and climate change, MLI Senior Fellow Laura Dawson told CTV on the weekend.

Dawson said Canada got a “black eye” on the climate change file over their handling of the Keystone XL pipeline, which the United States rejected in 2015.

Trudeau is in the United States this week for the first state dinner featuring a Canadian prime minister in several years.

“By the prime minister showing leadership on energy and climate change, that’s going to create a lot of goodwill here, I hope, and hopefully they can find some common ground”, Dawson told CTV.

Dawson is the co-author, with MLI Senior Fellow Sean Speer, of a recent commentary on seizing the moment in the Canada-U.S .relationship.