in Columns, In the Media, Innovation, Latest News
Reading Time: 4 mins read
A A 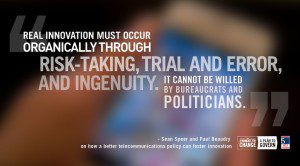 Canadian Prime Minister Sir Wilfrid Laurier knew that core national infrastructure was a key driver of economic development. Sean Speer and Paul Beaudry say it’s something his predecessors, who continue to meddle in the telecommunications industry, could learn from.

This year marks Sir Wilfrid Laurier’s 175th birthday. Think about that for a moment. He was born 26 years prior to Confederation and was already 35 when Alexander Graham Bell invented the telephone. Suffice it to say much has changed since Laurier’s era.

Yet there remain useful lessons from Laurier’s leadership. The context has changed and circumstances have certainly evolved, but something immutable remains about his big-picture thinking for the country.

He understood, for instance, that core national infrastructure wasn’t an end in itself, but rather an enabler of economic development, investment, jobs, and ultimately opportunity for Canada. It’s the principal reason that his government went to such great lengths to support the construction of a third transcontinental railway. Laurier saw railway infrastructure as an important means to Canada’s economic ends.

Which brings us to today and the federal Liberal government’s vision of a new “Innovation Agenda.” The minister of industry’s mandate letter from the prime minister has a smattering of references to “strategic investments” and industrial “strategies,” but only limited consideration is given to the digital infrastructure needed to create a climate conducive to entrepreneurship and technological innovation.

In practical terms, this means shifting telecommunications policy from heavy-handed regulation to harnessing real competition to allow for the deployment of better networks, new technologies and services, and ultimately lower prices for consumers. A smart, new telecommunications policy that views the industry as a dynamic enabler rather than a public utility ought to be a key part of the government’s innovation agenda.

Canadian public policy has viewed the telecommunications industry as a public utility almost since Alexander Graham Bell’s intellectual discovery. This mindset was reflected in the Harper government’s “fourth-player” policy which twisted, pulled, and cajoled the market to produce a fourth national wireless competitor. The underlying assumption was that Canada’s wireless sector had a competition problem and that state intervention in the form of preferential spectrum auctions, mandatory network and tower sharing policies, and asymmetrical access to foreign capital was justified to produce new market players.

Europe shows where this type of policy leads. Government tinkering in search of more competition has contributed to a decline in mobile revenues and underinvestment in network infrastructure. Europe is often viewed as a consumer’s paradise, but it has had difficulty deploying new technologies because of the inadequacy of its networks. Would Canadians rather have the newest iPhone and the fastest network speeds, or marginally lower prices? European policy-makers are now being forced to confront this question.

A smart, new telecommunications policy that views the industry as a dynamic enabler rather than a public utility ought to be a key part of the government’s innovation agenda.

The point is that a race to the bottom on wireless pricing can hinder growth in other sectors and undermine other priorities such as technological innovation, medical research, and business startups. A market-oriented telecommunications policy must be a founding pillar of an effective innovation agenda.

Notwithstanding the problems with its underlying premise, the fourth-player objective has been achieved following Shaw Communications’ recent acquisition of Wind Mobile. Now is an opportune time to shed the public utilities mindset reflected in past government policy and move in a new direction that sees the industry as a competitive marketplace where companies are making investment and pricing decisions based on competitive pressures and consumer demands.

This means free and open spectrum auctions, the liberalization of foreign-ownership restrictions, fewer mandates such as government-imposed, mandatory network sharing, and allowing incumbents to acquire spectrum on secondary markets.

Such a policy agenda can draw some inspiration from Laurier’s legacy of national development. There are limitations to the analogy (for instance, there is no need for direct public investment) but a vision of national infrastructure as an enabler of new ideas, technologies, and opportunity remains relevant even if the railway tracks have evolved into fibre optic networks.

Paul Beaudry is the director of development at the University of Calgary’s School of Public Policy and a research associate at the Montreal Economic Institute. Sean Speer is a senior fellow at the Macdonald-Laurier Institute.