BC won’t be the last obstacle to overcome for pipeline construction: Brian Lee Crowley for Inside Policy 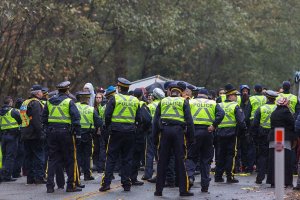 Even once British Columbia accepts it must obey the law, we can still expect trouble from the hardline environmental movement, writes Brian Lee Crowley.

Here is the bad news for those who think the current spat between BC and Alberta over the Trans Mountain pipeline is the final hurdle before the project is completed: You ain’t seen nothin’ yet.

To hear the politicians and the media tell it, BC’s attempts to block the pipeline and Alberta’s proposed trade-based remedies (like blocking BC’s supply of oil and gas) are the big obstacle to getting the pipeline built.  The prime minister promises the pipeline “will be built” while the premier of BC promises every avenue will be explored to block it and Alberta ratchets up the rhetoric about punishing BC.

This, however, is not the main course, but only the appetiser. Why? Because, when all is said and done, BC will eventually have to recognise that it must act within the law – and the law here is firmly on Ottawa’s side. There is much discussion about a possible special law that parliament might pass stating yet again what the law and the courts have already made crystal clear: that Ottawa is the government in Canada that makes decisions about infrastructure, like pipelines and railways, that crosses provincial boundaries. There is also talk of financial penalties, such as withholding some federal transfers and a possible face-saving offer to BC from Ottawa to further improve the resources devoted to coastal protection and oil spill clean-up.

BC will eventually have to recognise that it must act within the law – and the law here is firmly on Ottawa’s side.

What everyone seems to be forgetting, however, is that the province of BC isn’t the last obstacle to be overcome on the road to pipeline construction. Even once BC accepts it must obey the law, we are left with those who feel no such scruples: the hardline environmental movement. These are people who hear the call of Planet Earth to stand up in her defence. They are unmoved by arguments that we have legal and constitutional processes by which we resolve disputes that set Canadians against one another and that in a law-abiding society those on the losing end of such arguments must nevertheless respect the democratic process and the rule of law. Extremism in the defence of the environment is no vice could be their motto.

It is vital to underline that this is a completely different matter than First Nations’ concerns, which are still being dealt with within the framework of the law as established by the constitution, parliament and the courts. Indigenous concerns, although much more diverse than the media coverage would have Canadians believe, are separate from the thrust of environmental protests; such protests will certainly embrace Indigenous peoples who oppose Trans Mountain while ignoring the 50 or so Aboriginal communities that have signed on to support it.

The key point, however, is that the argument I am making about the hardline environmental movement is not meant in any way to contest the assertion of legitimate Aboriginal rights under the law. In fact, First Nations that support responsible development and want to use their legitimate power to negotiate a piece of the action have every interest in ensuring that disputes like this are settled within the framework of the law. They will suffer more than most if investment in the natural resource economy is driven away by political uncertainty.

Returning to the environmental movement, remember that, despite minor skirmishes with the authorities along the pipeline route (including some kabuki theatre involving the leader of the federal Green Party), activists have been relatively quiescent over the last while. After all, why put themselves at risk of fines and jail time when they have the government of BC and all its legal and financial resources fighting in their corner?

But suppose that the prime minister manages to neutralise Premier John Horgan. Then you can be 100 percent certain the gloves will come off.

What happens after that is easy to foresee. The environmental movement will unleash a large-scale campaign of civil disobedience and more.  They insist that they will not be stopped.

The environmental movement will unleash a large-scale campaign of civil disobedience and more.

What might this look like? It could take many forms but let’s assume that it aims to reach a crescendo at the moment of maximum political leverage – namely the 2019 federal election, less than a year and a half away.

The campaign will have two messages. The first arises from the hostage to fortune given by then opposition leader Justin Trudeau, who ill-advisedly claimed that with respect to pipelines “governments issue permits but communities give permission.” The opposition to Trans Mountain will surely remind the prime minister of this endorsement of the central position of the so-called “social licence movement” – that disaffected communities who don’t win their argument before democratically and constitutionally-constituted governments, tribunals and courts, nonetheless have the final say over projects they dislike.

Since no one knows what the relevant “communities” are or how one might determine if they have given their permission or not, anyone can stand up and say that their “community” says no to Trans Mountain. Who can prove them wrong?

The prime minister will be roundly and loudly accused of hypocrisy and the abandonment of the environmentalists whose support he so assiduously courted in the last election. The political message in 2019 will be loud and clear, especially in the Lower Mainland, where the pipeline terminus lies and where Mr. Trudeau won many seats last time round.

The campaign’s second message will be how the refusnik groups are so incensed that they are willing to risk jail and fines to make their opposition effective. One need not recruit that many protesters in absolute numbers from the 2.5 million people in the Lower Mainland, not to mention professional international “campaigners” and celebrities who will rush to their sides, to make the nightly news. And, as the election approaches, expect the tactics at protests sites along the pipeline route to harden.

When the prime minister says the pipeline will be built, he is defending democracy and the constitutional order.

Nothing would make pipeline opponents happier than to see on the front page of every newspaper in the country the federal government and the RCMP throwing scores, if not hundreds, of protesters into paddy wagons in the lead-up to Election Day 2019, ideally with a few mayors, MLAs, MPs and Raging Grannies at the head of the queue. In this heated environment, acts of violence, sabotage and civil disobedience will be deployed in order to make such confrontations unavoidable. Fences will be scaled, bodies chained to equipment, roads blocked, cars and trucks vandalised.

When the prime minister says the pipeline will be built, he is defending democracy and the constitutional order, not to mention the majority of British Columbians who, according to polls, support the project. But if he thinks that all that’s needed is to see off a weak BC premier with no real tools in his toolkit, he is in for a rude awakening.

If when the crucial moment comes, he doesn’t have the stomach to see off the activists and protesters, it won’t just be the Trans Mountain pipeline that will suffer. The message that will go out to investors everywhere is that even when legal businesses pursuing their lawful activities have the active support of the public authorities, intimidation by radicalised minorities can and will win the day and put investment at risk.

The fact that Ottawa may financially backstop the project is irrelevant. Companies don’t want compensation for failed projects. They want certainty that if they respect the law they will be allowed to get on with doing their work. The stakes couldn’t be higher.