For automakers, what might the pandemic fallout entail?: Linda Nazareth in the Globe and Mail 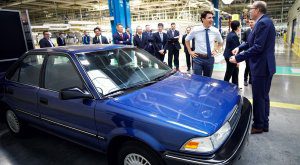 Driving less may be one of those shifts, and now might be a good time to start thinking through what that might mean for industries such as auto manufacturing, writes Linda Nazareth.

No, not everyone will work from home forever, but some people will. And no, not every single thing we buy will be chosen online then flung on our porches in a box with upward arrows, but some things will. With those two trends in place, it’s time to consider what might happen to the auto industry, since fewer trips to the office or the mall will inevitably mean a need for fewer vehicles.

Car ownership, and commuting, are firmly entrenched in North American society. As of the 2016 census, 93 per cent of working Canadians work someplace other than their home, and nearly 80 per cent of them drove to get to it.

No surprise then that our highways are in a constant state of disrepair and complaints about commute times get louder every year, or at least they did prepandemic. Although it is not clear how many people will switch to doing so long term, Statistics Canada estimates that 40 per cent of the work force have jobs that can be done without leaving home and presumably most are doing them there for now, no car required.

As for online shopping, even those who were shy about going that route prepandemic have been giving it a try. According to the retail trade figures for June, on an unadjusted basis, Canadian retail e-commerce sales were $3.2-billion or about 5.5 per cent of total retail trade. If that does not seem like that much, keep in mind that the figure is 71 per cent higher than it was a year ago, compared with a 3-per-cent gain for total retail sales.

With similar trends taking place in the United States (a country where last year motorists collectively drove the equivalent of 337 round trips from Earth to Pluto), analysts are starting to calculate what this might do to the demand for motor vehicles. Although no one expects the 64-per-cent drop in car usage the U.S. saw during the height of the pandemic to continue over the longer term, the fact is that the number of miles travelled could be down enough to damage what is a key sector to the North American economy.

A new study by consulting firm KPMG attempts to put some numbers on it in the U.S. case by looking at how much “vehicle miles travelled” (VMT) could be down postpandemic, and what that would mean for vehicle demand. Their research suggests that with more remote working and more shopping online, Americans will end up cutting their VMT by about 9 per cent a year (the equivalent of driving 270 billion miles or 435 billion kilometres) even in a postvaccine world. In turn, that would translate into a fall in car ownership from about 1.97 vehicles per household to 1.87 vehicles. That may not seem like a huge adjustment, but in practical terms it would translate into 14 million fewer cars on the road, and by extension, a lessened need for car production.

Given that so much of Ontario’s manufacturing base is centred on motor vehicles and parts, that is not good news, particularly if the Canadian patterns of driving mirror that of the U.S. Keep in mind, too, that there is evidence that demographics are against car ownership, and that younger generations are less in love with car culture than older ones to begin with. Throw in some tepid growth as business crawls back after the pandemic and unemployment stays high, and it is not an encouraging picture ahead.

Of course, fewer cars on the road will absolutely have some benefits, to the environment to start, as well as in terms of reducing the costs of constant road repair. And the number of accidents – and deaths – will absolutely go down as well. After the first month of lockdown in California, a study by the University of California, Davis, found that as a result of lower traffic volumes on highways, collisions had fallen from an average of 1,000 a day in California to 500, with crashes involving injury declining from 400 to 200. In dollar terms, they estimated that the savings to the state was about US$40-million a day.

The pandemic is, unfortunately, not yet over and it remains unclear to what extent people will be returning to the workplace or to the mall. Still, it is probably time to realize that we are not going to completely turn the clock back to the world as it was before March of 2020. Driving less may be one of those shifts, and now might be a good time to start thinking through what that might mean for industries such as auto manufacturing.

Linda Nazareth is the host of the Work and the Future podcast and senior fellow for economics and population change at the Macdonald-Laurier Institute in Ottawa.

If the Czech Republic Can Do It, So Can We: J. Michael Cole for Inside Policy