This commentary by Michel W. Drapeau examines the shortfalls in Canada’s access to information regime and how to make it more functional. 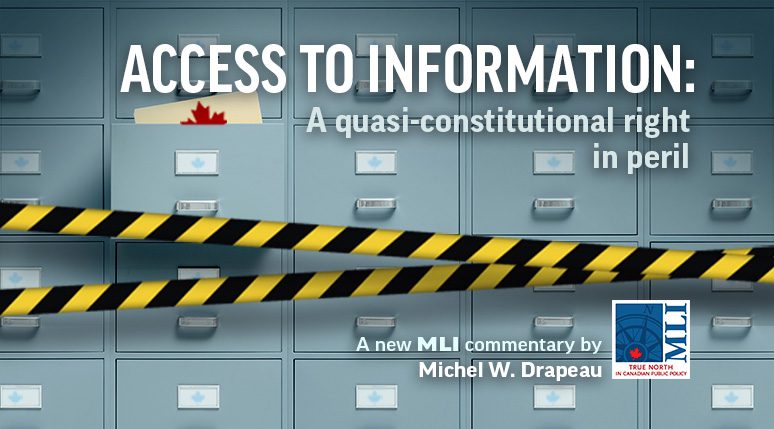 On October 6, 2022, the Globe and Mail published an exposé on the federal access-to-information (ATI) regime, which spends $90 million a year but delivers little satisfactory results for anyone (Cardoso and Doolittle 2022). As the article goes on to say, during this past fiscal year, more that 285,000 ATI requests were submitted, and 51.2 percent of these requests were directed to Immigration, Refugees and Citizenship Canada. In the previous two years, the overall number of ATI requests received by all institutions was 156,222 and 145,962 respectively, which is almost half of the 285,000 requests received this past year (Treasury Board of Canada Secretariat 2021).

The current explosion of ATI requests has had a significant impact aggravating an already less than brilliant performance record. According to the Globe, every federal institution is now currently “struggling to keep up with its legally required access-to-information duties…  [and only] 30 per cent of the requests were completed after their legislated deadlines” (Cardoso and Doolittle 2022).

Last year, the Office of the Information Commissioner (OIC) also received a record 10,000 complaints; this is also an aberration. In the two previous years, the OIC received a total of 4068 and 6945 complaints respectively (OIC 2022).

As discussed below, in theory the ATI regime is designed by law to provides timely and unfettered access for citizens to official government records. When requests for government information – some of which are urgent and of high public interest – are delayed to the current extent, in some instances they become pointless. The problem is made worse by an OIC that makes complainants wait months on end just to be assigned a case worker.

By all accounts, the federal ATI regime is currently broken, waiting for Godot. Meanwhile, Canada faces a transparency crisis in government. In this paper, I intend to first cover the raison d’être, or the purpose for the existence of a right of access, and secondly, to present some practices and recommendations to make the current ATI regime more functional to address its statutory obligations.

Sweden has had a freedom of information (FOI) law since 1776. It  took nearly two centuries for this Scandinavian concept to cross the Atlantic. The first modern FOI regime was signed into law in the United States in 1966.  It was significantly strengthened in 1974 by a series of amendments in the wake of the Watergate scandal.

Eight years later, after much parliamentary debate and much public pressure, Canada followed suit. Enacted in 1982, in the wake of the Canadian Charter of Rights and Freedoms, Canada’s very own Access to Information Act (ATIA) was perceived at the time by the political elite, the media and the public as the beginning of a new era; the catalyst for changes in the way that public authorities would approach openness. Although not specifically covered by the Charter, this new “right of access” formed an integral part of the “freedom of expression” concept. The purpose of the Act is clear: “to enhance the accountability and transparency of federal institutions in order to promote an open and democratic society and to enable public debate on the conduct of these institutions.”

As of 2020, more than 127 UN member states  have implemented some form of FOI legislation designed to facilitate access to government records.[1] At least 10 more nations are currently considering FOI laws. Others have even gone as far as modifying their constitutions to enshrine a right of access. Moreover, a number of intergovernmental bodies, including the United Nations, the European Union and the World Bank, have a right of access regime (Lemieux and Trapnell 2016). The expansion of access across the community of nations is in response to pressure from growing cross-national commerce, trade and banking sectors; civil society organizations; as well as the news media for more democracy, transparency, integrity and accountability on the part of national governments.

The 1977 Green Paper on Public Access to Government Documents, tabled by the then Secretary of State for Canada, opened by stating:

Open government is the basis for democracy. It is an essential consequence of the extension of the franchise to all adult citizens. For a democratic society is one in which the exercise of governmental power is undertaken not by an elite according to its own precepts, but by an executive accountable to the public itself for the goals of government action and the effectiveness of government performance in their achievement. (Roberts 1977)

Enacted in 1983, the ATI legislation has given rise to a wide body of jurisprudence and policies, including the decision in which the Supreme Court in Dagg v. Canada (Minister of Finance), [1997] held that the overarching dual purposes of the ATI legislation are (a) to facilitate democracy by helping to ensure that citizens have the information required to participate meaningfully in the democratic process; and (b) to have politicians and bureaucrats remain accountable to the citizenry.

The 2005 discussion paper on a Comprehensive Framework for Access to Information Reforms recommended, inter alia, that the basic ATI application fee be increased from $5 to $10 (Canada, Department of Justice 2005). Interestingly, it also pointed out that 40 percent of the ATI requests were made for commercial purposes. As such, it suggested that heavy commercial users should bear their proportionate share of the cost.  Noting the current no time limit on the completion of a complaint investigation, the White Paper also recommended the OIC be required to complete all complaint investigations within 90 days.

In some ways, the FOI serves both as a “silent auditor” guaranteeing accountability, checking corruption, improving in many areas of human rights, as well as an “open microphone” encouraging participation in government by every sector of society. This is due to a number of reasons:

As a side benefit, the more that is disclosed about the decision-making process and what the government is up to – in contemporary and not in historical terms – the greater is the trust in government. Finally, the more the public, the average person, whether rich or poor, can know about how his or her government functions, the more level becomes the playing field, and greater is the likelihood of fairness in government policy and action.

Today, it is almost impossible to obtain access to substantive information in records about the federal government, particularly within statutory timeframes.  Also, when disclosure is finally made after lengthy time extensions, it is normally rife with exclusions and exemptions.

It gets worse. Over the past few years, it has become common for a complainant to wait a minimum of two years to have their complaint addressed by the OIC. This exaggerated delay causes a complainant real prejudice since the Act prevents them from applying to the Federal Court for a review of the matter until a Final Report is received from the OIC setting out the results of the investigation and any applicable recommendations.

Positive steps should be taken by government to tackle its residual widespread culture of secrecy, promote open government and make it clear to everyone that access to information is a basic, quasi-constitutional right. Six steps are advanced below to improve the performance of the ATI regime and ensure that ATI users’ right of access is duly recognized and acted upon. The first three steps can be done almost immediately, while the latter three should be acted upon soonest afterwards.

Democracy requires accountability and accountability requires transparency.  Increased openness, by reducing secrecy and promoting understanding, increases public trust. In Canadian democracy, the ATI legislation encourages accountability through transparency as the most prominent expression of a profound national commitment to open government. At the heart of such a commitment is the idea that accountability is in the interests of both government and citizenry alike.  The pursuit of the above recommendations for changes, accompanied by a commitment to reform the ATI regime clearly expressed by the prime minister, would send a much needed and powerful signal throughout both government and the citizenry.

Colonel-Maître Michel W. Drapeau is an adjunct professor at the Faculty of Law, University of Ottawa and the co-author of the legal text Federal Access to Information and Privacy Legislation Annotated published annually since 2002. He is also the president of Michel Drapeau Law Office, the first established private law firm to practise military law in Canada. He retired from the military in 1993 after serving 34 years.

Lemieux, Victoria L. and Stephanie E. Trapnell. 2016. Public Access to Information for Development: A Guide to the Effective Implementation of Right to Information Laws. World Bank Group. Available at https://documents1.worldbank.org/curated/en/983941467996646873/pdf/106580-PUB-ADD-SERIES-DOI-PUB-DATE-ISBN-ABSTRACT-AUTHORS-PUBLIC.pdf.

[1]              In 2020, the UNESCO conducted a survey of UN member states that have adopted constitutional, statutory and/or policy guarantees for public access to information. See UNESCO, International Programme for the Development of Communication 2020.

The neglect of Canada’s armed forces is leaving us all defenceless: Richard Shimooka in the Hub

In this brave new age, we need to think more about age-friendly jobs: Linda Nazareth in the Globe and Mail

In this brave new age, we need to think more about age-friendly jobs: Linda Nazareth in the Globe and Mail