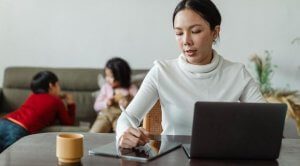 Now is the time to craft plans to make sure women who do not  head for the elevators and unpack their desks do not pay a price that might ultimately hurt them and the organizations that need their talent, writes Linda Nazareth.

Some see it as the silver lining of the pandemic, at least for women. With so many people working from home, companies are realizing that a lot of work can get done from there, and that insisting on a physical presence at the office may not be necessary, at least for everyone. Parents, particularly mothers, have wanted some form of this for years, so surely this is time to celebrate. No more commuting, no more wasting time around the water cooler, no more focusing on anything except getting the work done. Good news and a great equalizer – or is it?

The reality is that although there are things that parents may appreciate about not having to slog into work, they may find themselves paying a substantial price in terms of their career advancement. That is the conclusion of a new study by authors Hermina Ibarra and Tomas Chamorro-Premuzic along with former Australian prime minister Julia Gillard. The study, just published in the Harvard Business Review, makes the point that allowing work from home without changing anything else about corporate culture may be a distinct disadvantage for women as compared with their male colleagues.

There are three problems as they see it. The first is that being home more generally means that women take over more domestic responsibilities, whether or not they are taking Zoom calls. Second, there is the fact that that water cooler chat tends to be of benefit in a lot of ways that are not always easy to discern. Informal conversations at work tend to lead to connections and ultimately to assignments and improved career trajectories. Finally, there is the old face-time part of it: out of sight tends to be out of mind, at least when it comes to the way that many managers see things. If your manager is in the office and you are in his or her face all day, you presumably have an advantage over someone who is a blurry image on the daily videoconference call.

None of these are new issues, and they have always been the bane of those who choose to work from home. Still, many people have always been willing to skip a promotion or two if it means spending any time in a crush of people on the subway every day – and that’s before there was a chance they could get a deadly disease doing so. One would hope that with a greater proportion of people of all genders working from home some of these problems would be sorted out anyway, but that might be a leap of faith too far.

The danger, according to the researchers, is that in workplaces where some people go back to work and some do not, you end up having two tiers of workers, with those who come to the office treated as if they are in the VIP area of the club or in the business lounge, and everyone else jammed into the economy seats. To avoid this means having an actual plan to prevent it, one that relies on data on output, re-education of managers and a wholesale change in many corporate cultures. While that may sound ambitious and unlikely, the fact is that many of the shifts in work practices that have occurred because of the pandemic would have seemed unlikely, if not impossible, just a few months ago.

The researchers do not look at the worker side of things, but perhaps there is some food for thought there as well. Studies have shown that men with and without children and women without children actually work more hours when they have more control over their schedules, while women with children do not. Easier said than done, but perhaps anyone who wants a promotion needs to actively strive to make sure that their domestic responsibilities do not take over their work lives if they choose to work from home.

The pandemic is of course not over, and until it is we will continue to make up the rules as regards working at home as we go along. At some point however, the all-clear will be sounded and we will be told that it is perfectly safe to go back to the office. Now, before we get to that day, is the time to craft plans to make sure that those who do not choose to head for the elevators and unpack their desks do not pay a price that might ultimately hurt them and the organizations that need their talent.

Linda Nazareth is host of the Work and the Future podcast and senior fellow for economics and population change at the Macdonald-Laurier Institute.

The civil service is neither neutral nor non-partisan: Philip Cross in the Financial Post

How to support Canada’s economic recovery: Jack Mintz in the Financial Post

How to support Canada's economic recovery: Jack Mintz in the Financial Post