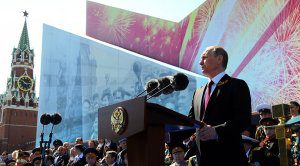 For Putin, the present crisis allows him to pursue his broader efforts to undermine the West’s leadership in international affairs, writes Richard Shimooka in the Vancouver Sun.

Over the past several months Russia has continued its military buildup around Ukraine, while making bellicose demands toward the country and NATO members in Eastern Europe. Part of the challenge has been to understand Russia’s aims, which essentially boil down to the mind of President Vladimir Putin, who has ruled Russia for over two decades.

Several interpretations have been put forward for Russia’s actions. Perhaps the most common has been that Russia believes it ought to enjoy an exclusive sphere of influence in its immediate territory as a great power, and that the West should respect this. There are variations to this view, but many focus on Russia’s historical hegemony over the region. Putin and his government have put forward this rationale as the primary modus vivendi over the past several years.

Putin has said the democratically elected Ukrainian government, in his words, “was a forced change of identity” that made the Ukrainian people “deny their roots … and believe that Russia is the enemy.” It is part of the reason why Moscow prefers to negotiate only with the U.S., instead of Ukraine and European NATO members; Washington is the real power broker in this scenario.

Though the validity of the “greater Russia” perspective is extremely dubious, it may be a view honestly held in Moscow and shouldn’t be ignored. Even if Putin’s government has different objectives and calculus in mind, any solution must at least pay lip service to this view. This is the messaging that has been constantly delivered to the Russian people, who believe in the kinship between them and the Ukrainian people.

Another frequent interpretation for Russia’s actions is that they stem from the regime’s inherent weakness. While a powerful autocrat, Putin also understands the need to balance the various domestic constituencies that keep him in power. As a KGB agent in East Germany in 1989, he had a front-row seat to the potential for popular movements to overthrow authoritarian regimes, and has constantly sought to avoid the same fate.

His regime’s situation isn’t ideal. International sanctions levelled against Russia following its 2014 invasion of Ukraine and continuing support for the Donbas insurgency in Eastern Ukraine are creating a serious drag on the Russian economy. Moreover, many regions of Russia are witnessing serious economic stagnation and growing social unrest. This is plainly evident with widespread protests in Siberia throughout 2020 and 2021, as well as recent polling that suggests growing dissatisfaction within Putin himself.

For Putin, the present crisis also allows him to pursue his broader efforts to undermine the West’s leadership in international affairs. He has long viewed the U.S. and its allies as weak ideologically and arrogant; he has pursued a consistent adversarial policy to undermine them, including disinformation, cyber attacks and supporting illiberal groups in places like Hungary, Italy and France.

In Ukraine, Putin may believe he has found an ideal place to expose these flaws. While the U.S. and Europe have invested significant resources into developing Ukraine’s prosperity and security, it remains vulnerable to Russian military coercion.

The situation also allows the Kremlin to exploit fault lines in the Atlantic alliance. France, Germany and the U.S. have limited interest in Ukraine, compared with many former Eastern Bloc states like Lithuania, Poland and the Czech Republic, who view Ukraine’s fate as being a harbinger of NATO’s commitment toward their security. Many have memories of Soviet domination of their states, as well as the West’s inability to honour its security promises. This comes on the heels of the disastrous end to the Afghan mission, potentially further damaging its credibility.

Russia’s military buildup certainly has pushed the West to the negotiating table. But even still, there’s some reason to believe Putin may not be entirely interested in an invasion. The economic consequences will be sharp and immediate, including sanctions and the boycott of Russian gas. While Russia is likely to prevail in a conventional war against Ukraine, it will almost certainly face a protracted insurgency in any territory it holds. A protracted and bloody conflict with many dead Russian troops could cause serious domestic problems for Putin. Moreover, any attack on Ukraine would only increase nationalist sentiment in the country, risking further diminishment of Russian influence.

The West’s response has been to navigate gingerly between these various perspectives. Acquiescing to Russia’s broader demands would simply be unacceptable. Nor can the West trade away anything that would infringe on Ukrainian sovereignty. Any offer may embolden Russia to make more demands, and more threatening military deployments, in the future. NATO member states thus far have done a fairly good job at presenting a united front, which Putin may not have anticipated given his low opinion of Western states.

At the same time, one must be wary of boxing Putin into a corner. Even if he was not planning to use military action, Putin may feel compelled to do so because he was given (or perceived as having) no other option. This is part of the reason why the Ukrainian government has counselled calm and tried to avoid escalating the situation: They don’t believe that Putin wishes to invade, but they don’t want to put him into a position where that is his only choice.

Finding a resolution will require months of diplomacy and finding some path that allows Russia to step away from its brinkmanship without Ukraine or the West acquiescing to Putin’s demands. There’s no real easy answer for this dilemma, but with careful understanding of Putin’s aims and thinking, it may be possible.