Sir Wilfrid Laurier in Quebec – A Battle on Six Fronts: Patrice Dutil for Inside Policy 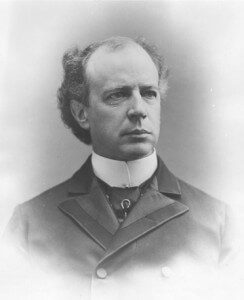 As we mark 175 years after the birth of Sir Wilfrid Laurier, historian Patrice Dutil writes that we should remember his great accomplishment of withstanding years in the crossfire of battles over language, education, religion and war. In the end, he won the hearts of Quebecers and helped secure his home province’s place in Canada.

This article originally appeared in the February edition of Inside Policy.

It is easy to believe that Wilfrid Laurier, the first francophone leader of a national party and French-Canadian Prime Minister of Canada, enjoyed the easy and overwhelming support of Quebec. The impression left by the result of the 1917 election certainly would justify that interpretation, but the reality was far more complex.

Over his long political life, Laurier fought a war on six fronts in Quebec. Instead of joining the belligerents, however, he stood in the crossfire. Two fronts were opened over French schools outside Quebec. Two sides battled over the place of Canada in the Empire. Another two sets of belligerents fought over the soul and direction of the Liberal Party in Quebec.

Early in his career, Laurier placed himself between ideological opposites. On the Right were the “ultramontanes”: conservative, Catholic intellectuals who fought any presence of modern thinking. On the Left were the “rouges”, some of whom were inspired by the more radical ideals of belle époque France. In 1877, Laurier staked a place between the two of them. The Liberalism of the Liberal party in Quebec, he declared, was one of moderation. For him, its philosophy was drawn from British genes of liberalism: fair play, the rule of law, a separation of church from political affairs, notions of free trade.

Two sides battled over the place of Canada in the Empire. Another two sets of belligerents fought over the soul and direction of the Liberal Party in Quebec.

The Liberals in Ottawa were seduced and urged him to make the leap to federal politics. There, Laurier catered to all tastes. He argued in defence of the Métis and campaigned against the National Policy. In the 1891 election, Laurier, now the Liberal leader, improved his party’s standing considerably, taking over 46 percent of the vote in Quebec. It was still less than Macdonald who took almost 50 percent.

He distinguished himself politically by drawing massive advantage out of the impasse over French and Catholic schools in Manitoba. He promised a resolution of the problem during the 1896 campaign and Quebec supported him: the favourite son took over 53 percent of the vote, a massive improvement that gave him the ticket to become Prime Minister (the Liberals actually lost the Canada-wide popular vote by 1 percent). 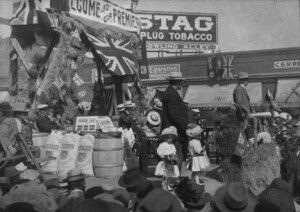 True to his word, Laurier forged a compromise in Manitoba. It acknowledged that French Canadians had no automatic right to be educated in French outside Quebec. They could petition for that right, however, and if their numbers were sufficient, Manitoba had to provide the funding necessary. It was a compromise that left ardent defenders of French and Catholic education unsatisfied. Still, it seemed reasonable to enough people so as to bring peace.

Laurier had been prime minister for three years when another two fronts opened in Quebec. On one side were the Imperialists: hardened Anglo-Saxons who demanded that Canada honour its historic commitments to Great Britain. On the other front were the anti-Imperialists, Canadianists really, who argued that Canada’s involvement in war was entirely conditional on being attacked at home. The battle erupted over the Boer War as both sides hammered out the arguments. Laurier stepped into the middle field and pleaded for a compromise position, but took fire from both sides. The compromise of allowing for the despatch of a Canadian militia, but only on condition that they be deployed in the field as British troops, worked for most people. According to a young Henri Bourassa, who spoke for many, Laurier had gone too far. The Prime Minister had set Canada on a path of war.

The final fronts saw moderates and progressive Liberals battling. A small but influential group in Montreal argued strongly in favour of a secularized public education system and for a politics that was purified of the corruption that sometimes seemed to infect the party in Quebec City, Montreal and Ottawa. It was led by Godfroy Langlois, the editor of the Liberal daily, La Patrie.

Laurier had to mediate between the two sides. Though he mostly sided with the moderates, he knew the radicals were potent. When a new daily was needed in Montreal, he agreed that Langlois be named as editor of Le Canada. Langlois, though loyal to Laurier, used the paper to excoriate most of the prime minister’s friends. One by one, Liberal leaders in Quebec were thrown from power. Quebec Premier Simon-Napoléon Parent, for instance, was deposed in 1905 just weeks after leading a crushing victory against the Conservatives. Raymond Préfontaine, a former Mayor of Montreal and also a friend of Laurier, was also defeated in Montreal. (Préfontaine eventually became a minister in Laurier’s government.)

Fire reignited at the same time on language rights during the creation of Saskatchewan and Alberta. Laurier brandished the Manitoba policy, but to the young members of the Mouvement nationaliste in Quebec, Laurier had again gone too far. Henri Bourassa finally abandoned his Liberal backbench seat in the House of Commons and was elected to the Quebec legislative assembly.

Keeping cover in the middle of six fronts is not easy. By 1909, Langlois’s endless demands for more state involvement in myriad issues became unendurable. Laurier finally acted in late 1909 and Langlois was fired. Langlois established Le Pays, a furiously combative weekly, in January 1910. In the same month, Henri Bourassa launched Le Devoir to fight Laurier’s idea of a Canadian navy. Both campaigned against Laurier in 1911. The Liberals took 50.2 percent of the vote in Quebec, a loss of six percentage points, and dropped 16 seats.

Remarkably, Laurier persisted. In the 1917 election, his enemies rallied to him to fight against the Union Government led by Robert Borden. Finally, in his last race, Laurier had united Quebec, with almost 73 percent of the vote. He died exactly 14 months later.

Laurier was buried in Ottawa, not in Quebec. There was some justice to this surprising decision. He had lived in the city for much of his life and had aspirations for it. Still, it was telling. Even with the bittersweet victory of 1917, it was felt best that his final rest be outside his province, away from the battle fronts that had marked his life in Quebec.

Patrice Dutil is Professor of Politics at Ryerson University. He is the author of Devil’s Advocate: Godfroy Langlois and the Politics of Liberal Progressivism in Quebec and co-writer of Canada, 1911: The Decisive Election that Shaped the Country.

Celebrating Sir Wilfrid Laurier and his enduring ideas: Sean Speer for Inside Policy