in Columns, In the Media, Latest News, Uncategorized
Reading Time: 4 mins read
A A 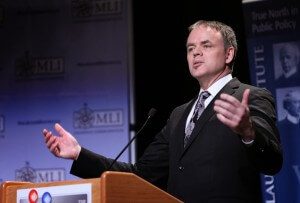 On Nov. 26 at the Canadian War Museum, in an debate hosted by the Macdonald-Laurier Institute and moderated by the Hon. Peter Milliken, professor Tom Flanagan and economist Jim Stanford debated the resolution “The right to strike has no place in the public sector.” The Ottawa Citizen has published their opening arguments in its opinion section. To read Tom Flanagan’s argument click here.

It might seem like ancient history, but it wasn’t long ago that Canadian governments knew how to balance their books — and then some. The collective operating surplus of Canadian governments in 2007 equalled almost $40 billion. Teachers, nurses, and other public servants did their jobs. Tax revenues were more than sufficient to pay for their valuable work (in fact, average tax rates were falling, not rising).

Then along came a global financial meltdown. (No one argues, by the way, that it was caused by teachers, nurses and civil servants.) Surpluses dissolved into deficits: not huge, by historic or international standards, but significant. And some political leaders made tackling the deficit their defining crusade. Showing they could manage their own finances helped them pretend they were in control of the worrisome events around them. In that effort, public sector workers and their unions presented a politically convenient target.

It’s not that public sector compensation costs caused the deficit (which didn’t exist, remember, until 2008). Nor would squeezing public employees be central to the deficit reduction exercise. At the federal level, direct compensation accounts for only 8.5 cents of each dollar in total government spending, and that ratio has been stable. Achieving, say, a wage freeze instead of paying a normal two-per-cent annual increase, on that small share of spending, could make no noticeable difference to the fiscal trajectory.

Nor was strike activity crippling the economy and service delivery. In fact, the incidence of work stoppage (measured by days lost per worker to strikes and lockouts) fell in 2012 to the lowest since statistics began in 1946: down over 95 per cent compared to the strike-happy 1970s. Public sector workers are less likely to go on strike, not more: they’ve accounted for one-third of all work stoppage days in the last decade, even though they now make up over half of all union members.

No, tilting at public sector unions is all about politics, not economics. Governments want to change the channel from persistent economic stagnation and embarrassing scandals. Workers in the private sector suffered during the recession, politicians argue (not that they act to support private sector workers, either). So it’s about time public sector workers suffer, too. The logic of this ideology of “shared misery” may be bizarre, but it’s politically potent.

Thus began the latest chapter in a long-standing Canadian tradition: when times are tough, blame the unions. And then take away their right to strike. It’s happened over 200 times in Canada in the last 30 years.

The latest example is Bill C-4. It would give the federal government unilateral power to define who can strike and who can’t (contrary to past practice and international convention). The government won’t detail how this will happen until after the law is passed. In a true Catch-22, the bill would also neuter the arbitration process for workers who can’t strike. And the whole process is buried within a 321-page omnibus bill, debate on which was curtailed two days after it was introduced. Bill C-4 is an affront to democracy — both in Parliament, and in the workplace.

The attack on public sector labour rights is usually justified by the claim that unions have soaked taxpayers through their irresistible demands. This claim is not supported. In practice, public sector bargaining tends to follow economy-wide trends, but with a lag. Public sector wages were much lower before public sector unionization took off in the 1970s. Wages caught up in the 1980s, then fell behind again during the austere 1990s. The public sector did better in the mid-2000s. But more recently, bargaining has clearly responded to tough times: for four years running, public sector settlements have lagged well behind private sector deals, and behind the general growth of earnings in the overall economy.

Average earnings in the public sector are five to 10 per cent higher than economy averages (depending on how they are measured) — but education and credentials are significantly higher, too. Comparing similar occupations and credentials, it’s largely a wash. Women make more in the public sector than in the private sector, but men make less. The whole wage scale is compressed (with a higher bottom and a lower top). But overall public sector compensation is not out of whack — and powerful economic and political pressures tend to keep it that way.

Governments are the only employer with the power to “solve” their labour relations problems by simply dictating a settlement. The potential for misuse of this confluence of fiscal interest and political power is enormous. Most private sector employers would love to outlaw strikes and dictate wage outcomes, but they can’t — and for good reason. Where public employees provide a genuinely essential service (like fire, police, and some health services), there’s no debate: in place of strikes or lockouts, a neutral arbitration system should replicate collective bargaining outcomes without work stoppage. But other public sector workers must have the same rights as anyone else in our society to organize themselves and promote their interests, up to and including withdrawing their labour if that’s necessary to get a deal.

Jim Stanford is an economist with the trade union Unifor.

Should public servants have the right to strike? NO