Should public servants have the right to strike? NO

in Columns, In the Media, Latest News, Uncategorized
Reading Time: 4 mins read
A A 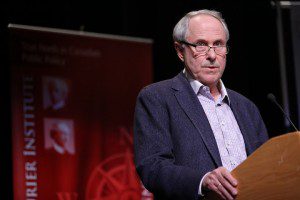 On Nov. 26 at the Canadian War Museum, in an debate hosted by the Macdonald-Laurier Institute and moderated by the Hon. Peter Milliken, professor Tom Flanagan and economist Jim Stanford debated the resolution “The right to strike has no place in the public sector.” The Ottawa Citizen has published their opening arguments in its opinion section. To read Jim Stanford’s argument click here.

The reason is not far to seek. Academic salaries, like all salaries, are determined by the intersection of supply and demand in the relevant employment market. There is an international market for scientists and scholars that universities cannot ignore. A university that refused to pay the going rate for the calibre of professors that it wished to employ would soon see its best performers leaving for better offers elsewhere, perhaps from other universities, perhaps from other professional employers.

A strike (or lockout) in the private sector is a test of endurance between employees and their employer. Employees have to give up the wages they would earn if they were working, and the employer gives up the revenues that would come from normal business operations. Each side is inflicting losses upon itself as well as upon the other side, so both have incentives to settle the dispute through compromise.

The existence of competition, which is the norm in the private sector, provides incentives for moderating demands. Employees know that if they push too hard for higher compensation, they may drive their employer out of business, or at least to make new investments in other jurisdictions rather than in the strike-prone workplace. Employers know that if they bargain so hard as to drive wages below prevailing market rates, they may start to lose their most productive employees to offers from competing employers.

The situation is very different in the public sector, where government is the employer. In the first place, most services provided by government are monopolistic, or nearly so. Some are inherently monopolistic, such as national defence and police protection. Others have been made monopolistic by public policy decisions, such as the incorporation of hospitals, schools and universities into publicly owned and operated systems. Public owners rarely seek to make profits; they offer services to the public based on revenues appropriated in the government’s budget. The employer, therefore, does not have the normal economic incentive to settle, or even to bargain in good faith. The longer the strike continues, the better the employer’s balance sheet looks.

Political pressure, however, substitutes for economic pressure. The real purpose of a strike in the public sector is not to impose economic loss on the employer but to inconvenience the public. A teachers’ strike, for example, imposes inconvenience and economic hardship upon families, who may have to scramble for temporary day care solutions. In the public sector, the strike is a political weapon, not an economic weapon.

Employees, moreover, do not have to worry about the loss of their jobs. The Ottawa school board cannot relocate its public schools to Thailand, and the police commission cannot transfer its officers to patrol the streets of Manila. If a successful strike imposes higher costs upon the employer, the usual remedy is to turn to government for higher appropriations, which in turn will be covered with some combination of higher taxes and borrowing.

Of course, at some point, taxpayers will start to rebel against further increases, and government credit ratings may be downgraded if deficits soar too high. In the long run, gains extorted through repeated use of strikes and strike threats may lead to reductions in service; but — and this is a crucial point — the reductions in service and government jobs will not necessarily be in the sector where strikes have driven up compensation. In the private sector, workers themselves eventually bear the consequences of pushing too hard in collective bargaining; the goose that they kill will be the one that lays the golden eggs for them. But in the public sector, aggressive collective bargaining may well kill someone else’s goose; it all depends on how those in power assess the political results of budget reductions.

The most recent econometric study, by Jason Clemens and Milagros Palacios of the Fraser Institute, found a gross public-sector wage premium of 36 per cent. This was reduced to 12 per cent after controlling for a dozen variables known to influence earnings, including gender, age, education, experience, province of residence, size of employer, and nature of employment. The public-sector premium shrank further to 9.5 per cent when unionization was entered into the equation — still a sizable difference.

They found, in other words, that public-sector employees are paid on average about 10 per cent more than unionized private-sector workers with similar qualifications and experience. Furthermore, the public-sector advantage is not confined to wages. Public sector workers are much more likely to have a generous pension plan, retire earlier, have greater job security, get longer paid vacations, and take more sick days.

In short, public-sector employees in Canada are not an oppressed or disadvantaged minority, but more like what Lenin called a “labour aristocracy.” We in the public sector don’t need to extract even greater benefits by inconveniencing members of the taxpaying public who support us. We don’t need the right to strike.

Tom Flanagan is a distinguished fellow at the School of Public Policy, University of Calgary.