Shifting Focus But Not Purpose: The Canadian Military’s Role in the COVID-19 Vaccine Rollout – Carter Vance and Adam P. MacDonald for Inside Policy 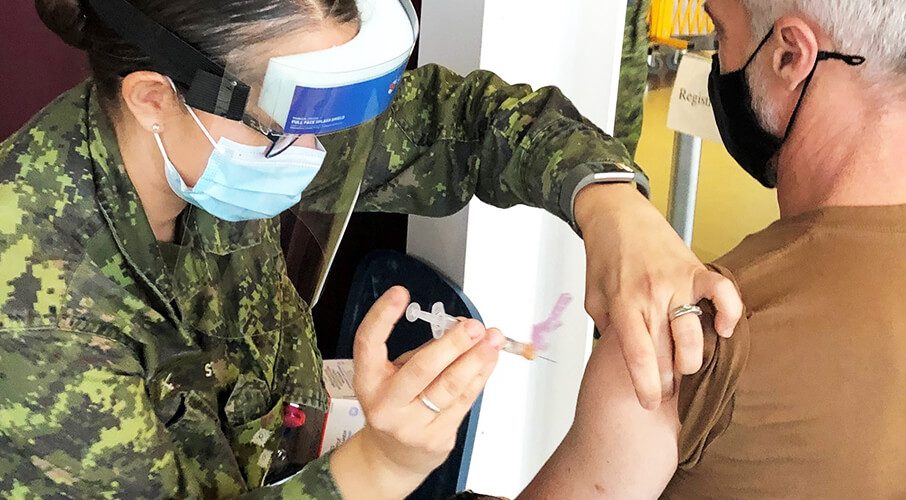 The Canadian Armed Forces are not going to come to our collective rescue, but intelligent deployment of the military could ease the burden on other parts of government, write Carter Vance and Adam MacDonald.

Canadians in general have held an expectation that their military will step in when needed to provide assistance at the request of civilian authorities during the ongoing COVID-19 pandemic. Though COVID-19 has certainly put Canadian Armed Forces (CAF) members into situations they may never have expected, such as their assistance with the operations of long-term care homes in Quebec and Ontario, on the whole these missions have been narrowly tailored. Their focus has been on providing emergency support to stabilize buckling civilian infrastructure, allowing time and space for those authorities to build capacity and retake control of the operations.

In this respect, as well as drawing increased attention to the shameful state of some of these long-term care homes, the CAF earned acclaim for performing admirably in difficult and unclear circumstances. Legitimate concerns about a potential overreliance on the military as a disaster response mechanism aside, it is clear that these efforts were welcome and warranted in the circumstances.

The CAF continues to provide support during the ongoing second wave of the pandemic, though at a smaller scale. However, the public and policy conversation around the CAF in relation to COVID-19 has shifted recently to that of vaccine distribution, as promising trial results for a number of vaccine candidates, which as a result may be approved for use soon, have come to be seen as “light at the end of the tunnel.”

As a result, the federal government has announced they are in the midst of developing a vaccine rollout plan. In support of this, the CAF has stated military members have “embedded” with the Public Health Agency of Canada to assist with establishing and running a national operational centre as well as contributing to a logistics support plan, The government, furthermore, recently announced Major-General Fortin will be in charge of these military efforts, specifically the leading role in the national distribution of the vaccine. Provincial governments are also preparing, with the Ontario government hiring  former Chief of the Defence Staff Rick Hillier to be in charge of their vaccine distribution efforts, with Premier Doug Ford saying the effort demanded “military precision.”

Both levels of government will face difficult logistical challenges, particularly given the cold storage requirements and two-dose nature of some of the vaccines under consideration. So it should come as no surprise that they would lean on the CAF and retired senior uniformed personnel with substantial expertise working in logistics across often-difficult environments to accomplish these goals.

These efforts do, however, raise the question of exactly how the military can best assist these efforts without overstepping their authority or expertise. The role of the CAF in this new phase – vaccine distribution and deployment – should be similar to its role in addressing the effects of COVID-19 thus far: upon request, limited in scope to those areas where civil authorities lack capacity and avoidance of enforcement duties.

The CAF, furthermore, faces two levels of support – as part of the federal government in the development of a national distribution plan and potential provincial/territorial requests for their own rollout plans. There is a potential that provinces and territories will implement different strategies in terms of prioritization of vaccine access during the initial period in which supply will be limited. Conversations around how best to balance various interests in terms of populations (e.g., front line workers, the health care sector, vulnerable populations including the elderly, etc.) are doubtless ongoing in government circles but must be made clear to the public well before distribution begins in order to avoid confusion, disappointment and possible anger.

Premier of Manitoba Brian Pallister recently called for “national criteria” to guide vaccine distribution across jurisdictions and this would be a welcome development if Ottawa could get provinces and territories to agree to a broad, national framework. This would allow the various actors to determine their capacity to meet the criteria and what resources they can bring to bear on them. At that point, where gaps remained, provinces and other orders of government could request CAF support to “fill in” areas where they are lacking. Some obvious potential areas would include:

It should be remembered that efforts to combat COVID-19 took away from operational capacity from other CAF missions, both in Canada and overseas, and that any substantial role in facilitating vaccination – expected to be a months-long process – would need to be balanced with other priorities.

Further, governments must be mindful of the optics of using the military in the course of advancing a public health program, especially given the proliferation of misinformation and conspiracy theories around COVID-19. Though the vast majority of Canadians would likely be happy to see uniformed soldiers giving citizens a medical shot or transporting vaccines across the country, this could further an impression of those already skeptical of Canada’s handling of the pandemic of the vaccine as a vector of social control.

Furthermore, governments have remained ambiguous as to whether the vaccine(s) will be mandatory or not, with many public health experts advising it should be voluntary but with a strong public messaging campaign to alleviate concerns associated with ‘vaccine hesitancy,’ many of which are reasonable given the pace at which these vaccines have been developed. This is a critical component of the entire pandemic strategy as vaccine uptake will most likely have to be around 60-70 percent to achieve herd immunity, with some government estimates of upwards of 35 percent of the population falling into the ‘vaccine hesitancy’ category; for perspective, the vaccination level during the H1N1 pandemic in Canada was 41 percent.

The voluntary uptake level will be much higher for COVID-19 given its massive, country-wide socio-economic effects, but a national registry and monitoring program will have to be used to track vaccinations given the two-dose nature of the vaccine candidates. Such a program could potentially be used to locate and deploy additional resources to areas where vaccine uptake is lower than desired. These are important but complex issues, with any role of the CAF in these being highly constrained and/or completely absent. This includes:

The Canadian Armed Forces do have a role to play in making this next phase of COVID response – vaccine distribution – more effective than previous ones, which sadly led to deaths and other hardships that were likely avoidable had governments reacted in a faster, more coordinated fashion. The focus is shifting for the CAF but the purpose remains the same: support the actions and policies of responsible civilian authorities, ensuring these efforts reflect the types of assistance the CAF has traditionally done domestically.

The addition of military assets or expertise, however, is not a magical corrective to mistakes made at, nor a replacement for, the political and bureaucratic level. In other words, “Super CAF” is not going to come to our collective rescue, but intelligent deployment of the military could ease the burden on other parts of government, if they are willing to plan and execute in a clear, coordinated and coherent manner the response to what will, hopefully, be the final phase of this pandemic.

Carter Vance is a former Junior Research Fellow with the NATO Association of Canada and holds an MA in Political Economy from Carleton University. Adam P. MacDonald is a PhD student in the Political Science Department at Dalhousie University.

Age of Decoupling: Leveraging Canada’s global energy diplomacy in the Indo-Pacific and beyond: Henry Geraedts and Shuvaloy Majumdar for Inside Policy