What distinguishes a democracy from other forms of government? According to Andrew David Irvine, it is that in a democracy, no government is above the law. 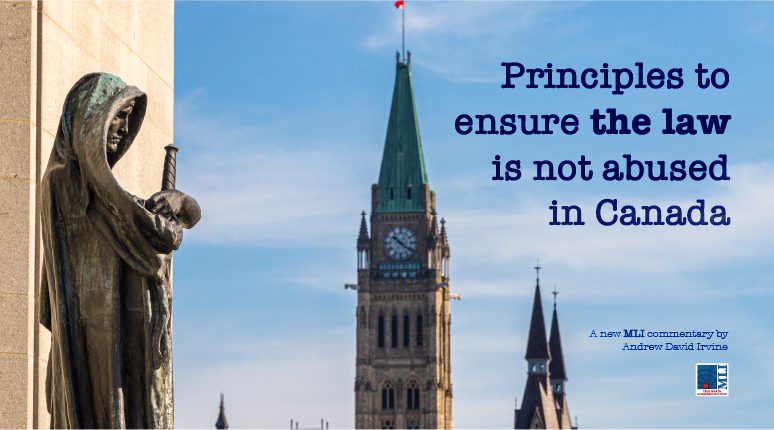 OTTAWA, ON (March 7, 2022): From blogs and coffee shops to the benches of Parliament, the “Freedom Convoy” spectacle and subsequent Emergencies Act debate have triggered a national dialogue about the rule of law in Canada, how it should be applied, and by whom.

Against this backdrop, a new commentary published by the Macdonald-Laurier Institute titled “Principles to ensure the law is not abused in Canada” offers a timely discussion of precedents and processes that are crucial to guaranteeing the fair and equitable application of laws in a democracy.

In applying the law, some level of discretionary judgment is unavoidable and necessary. But, as the author Andrew David Irvine notes, to avoid the possible abuse of power from too much discretion, established guidelines must be followed.

“In a democracy,” asks Irvine, “what guarantee do we have that police officers, judges, and politicians will not use the law to punish their political enemies and reward their political friends?”

Irvine identifies three key principles – the rule of law, separation of powers, and democratic accountability – that help a democracy safeguard its legal system from abuse. And he draws on legal rulings from Canada and other jurisdictions to reinforce the crucial principle that governments, even though they have the ability to make or change laws, must also be bound by the law.

“It is this idea – that no government is above the law – that distinguishes modern constitutional democracy from other forms of government, including theocracy, totalitarianism and unrestrained mob rule.”

In discussing how Canada relies on the separation of powers to ensure that political offices remain bound by the laws they oversee, Irvine highlights a zig-zag pattern of decisions by the current federal government.

Irvine makes the comparison between when First Nation protesters blockaded rail lines across the country in 2020 and the more recent convoy protests. In the former example, the author says Prime Minister Trudeau “got it right” when he said Canada is “not the kind of country where politicians get to tell the police what to do in operational matters.”

But just last month, in discussing the Freedom Convoy blockade, the Prime Minister said the government would consider requests for military help to end the protests. While this is legal under the Emergencies Act, Irvine says the inconsistent approaches to these different situations “merely served to highlight the unequal application of laws used to regulate protests across Canada in recent years.”

In a healthy democracy, concludes the author, the final verdict on the use of legal discretion rests with voters, when they evaluate the work of their governments in making fair, objective judgments and decisions.

“As the Supreme Court has noted, the remedy for divergence from the rule of law, just as with remedies for the violation of other constitutional conventions, regularly lies not with the courts but with the voter,” writes Irvine.

To see the full commentary, click the button below.

***
Andrew David Irvine is a professor in the Department of Economics, Philosophy and Political Science at the University of British Columbia’s Okanagan Campus.