The rising cost of policing in Canada

The ballooning cost of policing has caught the attention of budget-makers with municipalities and provinces across Canada. 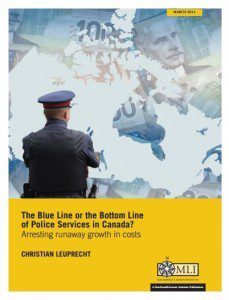 The president of the Association of Ontario Municipalities said in August continued pay increases for police officers is not sustainable as cities and townships across the country examine new methods to rein in the cost of police services. Federal cabinet ministers have also examined how to reduce the amount being spent on policing.

Everyone’s looking for a solution. So how, exactly, can governments across the country prevent police budgets from swallowing up ever-larger swaths of public money?

Arresting the cost of policing in Canada

The Macdonald-Laurier Institute published a report, titled “The Blue Line or the Bottom Line of Police Services in Canada? Arresting runaway costs”, showing just how extensive the problem is – and how much it will continue to grow.

Author Christian Leuprecht, a professor at the Royal Military College of Canada, says the cost of policing continues to rise even as our need for officers levels off.

He writes that while call volumes remained stable between 2002 and 2012, “provincial expenditures on security grew at an average annual rate that is almost double GDP growth over the same period”.

More police and firefighters appear on Ontario’s annual Sunshine List of public employees making more than $100,000 than any other profession. The reason? They consistently net pay increases of about three per cent per year, increasing the total yearly wage bill to about $8 billion.

Leuprecht proposes several ways to reduce the amount of money provinces and municipalities are doling out for police.

A large number of them deal with reducing the overhead in police operations. This would involve everything from sharing or contracting dispatch, tactical teams, forensics and investigations between forces to adopting common provincial standards and processes of hiring, communication and procurement.

However Leuprecht says there is only so much saving to be found in reducing overhead.

“The real question is why police who are making upwards of $100,000 a year are performing so many discretionary tasks that are not really core policing duties”, Leuprecht writes.

Administration functions, burglary investigations, prisoner transport and interview transcription – all of them are police services that Leuprecht believes contractors or civilian employees could perform at lower cost.

Leuprecht has provided expertise on the issue to newspapers, radio and TV stations across the country.

The Globe and Mail, the Toronto Star, Postmedia and the New Brunswick Telegraph-Journal have all quoted Leuprecht and his MLI study in covering the issue. The paper was the subject of a Globe and Mail column from Margaret Wente.

Leuprecht also authored a column for the Toronto Star on the subject and participated in an edition of TVO’s The Agenda that looked at the cost of policing in Canada.

Even in 2020, this paper was having impacts on the way Canadians think about policing. An article that appeared in the Toronto Star on June 2, 2020 made reference to the paper.

Fiscal reality always catches up with big-spending politicians: Cross in the Post