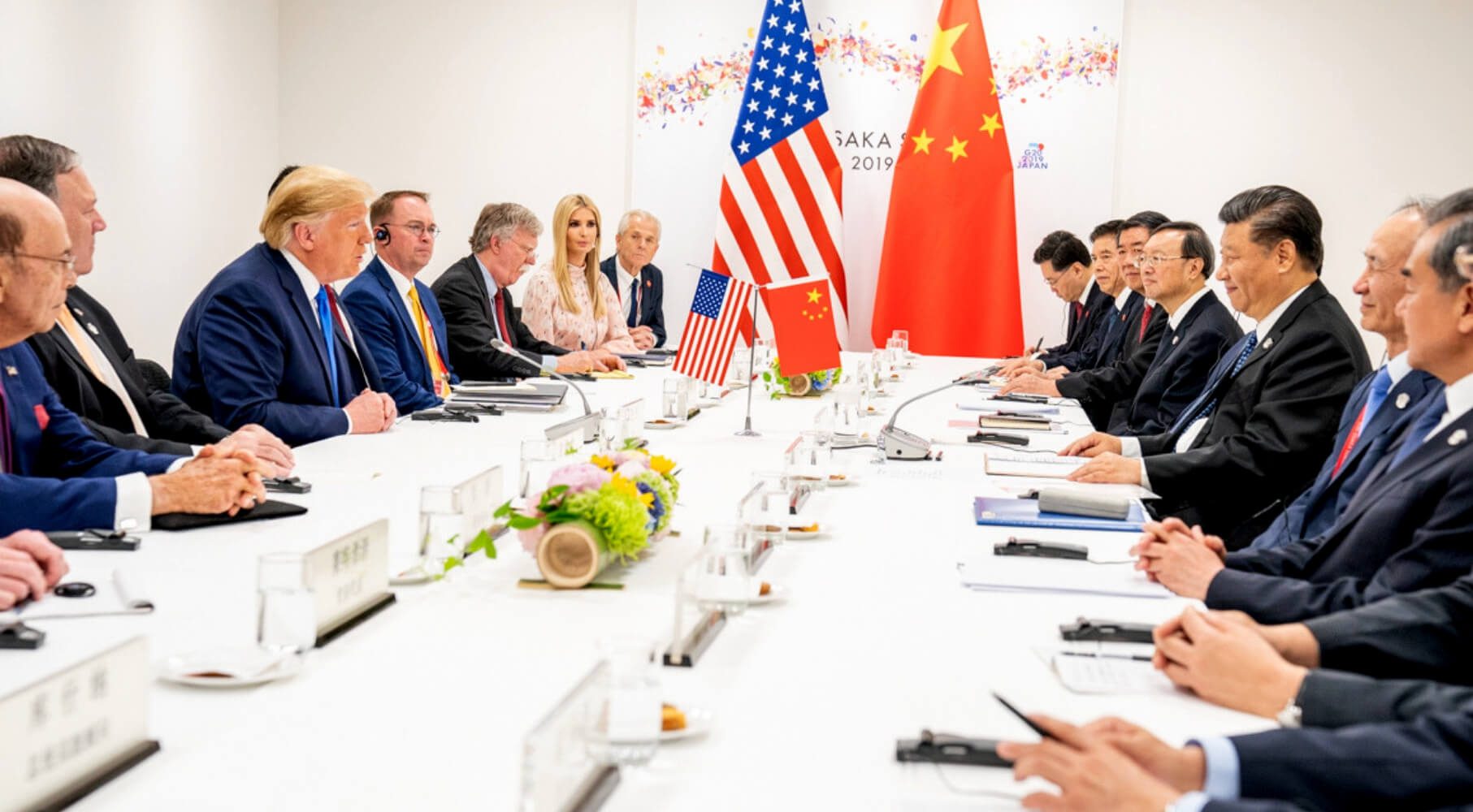 This is about strengthening relations with like-minded powers to think and act on how we can collectively counter China’s hegemonic pursuits while preserving the international order, especially when the current US administration seems, at best, ambivalent towards the project, write Adam Macdonald and Carter Vance.

Public opinion and the political landscape in Canada is hardening against China. This is due not least to Beijing’s increasingly antagonistic and coercive approach to bilateral relations, embodied in its aggressive response to Huawei CFO Meng Wanzhou’s detainment, alongside its recent actions to restructure the post-pandemic world in line with its own narrow strategic aims. Canada is at a decisive turning point in its relationship with China. Determining a new Canadian approach to China – embedded within and influenced by the hardening of the Sino-American rivalry – will have major ramifications for Canada’s entire foreign policy, including towards Asia.

Expanding trade relations, specifically with China, has been a major driving force in Canada’s Asian engagements, especially since the mid-1990s, when trade was prioritized in lieu of regional diplomacy and military deployments. Over the past decade Canada has slowly broadened its regional engagement, regularly assigning more of its limited political and military resources to Asia to further relations with regional partners and gain entry into prominent regional forums. Maintaining these efforts for the long-term will require a coherent regional approach which is of high priority in Canada’s foreign policy.  Furthermore, the ability to keep trade and diplomacy/security as largely separate pursuits, in Asia and elsewhere, is no longer tenable. Canada needs a more comprehensive and interlinked Asian approach – one that is informed by and addresses geopolitical considerations.

There are, in broad terms, four possible strategic regional orientations for Canada:

Minimal engagement: Canada does not cease its activities and relations with Asia, but rather refrains from further deepening them. Canada would continue trade pursuits but move more critical supply chains onshore – bypassing potential regional partners- and avoid diplomatically addressing and deploying military assets to disputed regional waters. Given the increasing number of security and economic issues in North America, the Arctic and Europe, Ottawa may decide to deploy its limited resources in these traditional regions of concern rather than in Asia. Such an orientation is unlikely, however, due to the lack of productive capacity onshore within Canada; the presence of important trading and security partners such as Japan, South Korea and Australia; and the need to be involved in discussions currently with regional partners (including possibly the Quad) and within NATO on expanding military relations with the region.

Confrontation: Canada would deepen regional alignment with the United States to prevent Chinese regional hegemony, thereby eliminating a possible springboard for Beijing to fulfil more global hegemonic ambitions. This would include cutting China out of supply chains and pressuring others to do the same; participating in military operations, coalitions and possibly arms deals explicitly focused on balancing China; and building regional institutions that exclude or heavily restrict Chinese involvement. Yet such an approach is unlikely for a number of reasons. For instance, it would contribute to a drastic acceleration of regional tensions and would cause significant concern among many regional partners such as Japan, South Korea and others, many of whom are looking to avoid exclusively choosing between the US and China.

Regional involvement: This has largely been Canada’s approach over the past several years, where it has sought to address concerns about China’s rise by participating in a plethora of multilateral instruments – though its success and level of commitment can be questioned. These forums include and exclude China and the US to various degrees (such as Trans-Pacific Partnership and ASEAN mechanisms). The goal is to support regional institution-building that is not explicitly anti-China in focus but rather constructs a regional order that is minimally acceptable to both the US and China, thereby helping to ensure China’s peaceful rise as a responsible stakeholder in the regional order, while preserving a degree of autonomy for regional states.

The focus here for Canada would be beyond relations with the US and China and more on other regional partners, forums and institutions. Doing so requires the thickening and tightening of relations between regional powers to ensure China does not establish an exclusive sphere of influence and the US maintains its key role as a regional security provider. This approach, more so than others, would require a clearly articulated understanding of the ‘Indo-Pacific’ as an organizing construct and whether and how Canada’s regional relations, particularly with major powers such as India and Japan, are guided by this. A potential concern here is if Canada is able and willing to commit the sizable resources and focus needed to being truly accepted into the region as an all-weather, rather than a fair-weather, friend.

Selective Minilateralism: In this orientation, Canada would focus on building strong relationships with specific regional secondary powers, including Japan, South Korea, Taiwan, Australia, India and Indonesia. Small, ad hoc multilateral groupings, which explains why this orientation is termed “minilateralism” would help to both reorient each others’ trade and investment away from China and to build a network  concerned about the contours of US-China competition. The emphasis would be on building partnerships with Asian states to coordinate positions at an international as opposed to a regional level. Many of these powers are worried about China’s revisionist actions and intentions, and are therefore keen to deepen cooperation amongst like-minded states in order to buttress the regional order and strengthen their collective positions vis-à-vis a rising (and increasingly bellicose) China.

Yet, at the same time, they also share important misgivings about the direction US strategy is moving in countering Beijing, which under the current administration has become increasingly erratic, transactional, and unilateral in nature. For example, there has been a lack of meaningful consultation; pressure to conform to Washington’s preferences regardless of their own concerns and interests; and the absence of constructing or participating in meaningful alternatives, specifically economically and technologically, to Chinese grand projects like the Belt and Road Initiative.

Many US allies and partners are concerned that the United States under the Trump administration is no longer a constructive power; that is, it is no longer focused on building, maintaining and ultimately defending an international order that enjoys widespread support among secondary powers. Instead, they fear the US is now fixated solely on confronting (and even containing) China, threatening to collapse all of Washington’s foreign policy towards this one objective, even at the expense of order maintenance. This new orientation has been manifest in the abdication of global leadership in addressing a number of pressing non-traditional security challenges such as infectious diseases and climate change, to say nothing about its heavy-handed and highly transactional approach to its many allies.

Ideally, Canada would combine its regional involvement orientation alongside selective minilateralism. In this formulation, Canada would continue its current emphasis on regional institution-building and would not necessarily exclude China from participating in them – though care would need to be taken that the principles undergirding institutions, such as the CPTPP, are not watered down in an attempt to accommodate China. That being said, given growing Chinese bellicosity, we would also be working closely with other democracies to deepen economic, diplomatic and defence cooperation and strengthen the liberal world order, while further ensuring continued constructive US involvement in this order.

By helping to create a network of secondary powers, Canada would have an important role in building and maintaining an open regional order – one that is not aligned against China and is open to its good-faith participation but it also prepared to defend that order and to do so cooperatively and multilaterally in partnership with the United States. As such, this network would share practices and approaches to navigating the rivalry between a bellicose, rising global power and the established superpower, the latter of which appears increasingly alienated from the order it constructed in Asia and beyond.

The importance of a stable and peaceful Asia for global security and prosperity necessitates Canada to further both its involvement in the region’s institutional architecture, such as the East Asia Summit and ADMM-Plus, as well as relations with a small number of secondary powers like Australia, Japan and Taiwan, whose collective power and influence is increasingly impactful internationally. How we continue to engage with China and cooperate with the United States would in turn need to be guided by the goal of strengthening the regional order in Asia. Given its limited resources, however, Canada will then have to reprioritize Asia against other competing demands, such as in Europe or the Middle East, or substantially increase its diplomatic, economic and military efforts and assets in order to meaningfully be involved in multiple regions simultaneously

While Canadian foreign policy cannot and should not be reducible to Sino-American great power rivalry, this strategic competition is increasingly becoming a system-level force that has global effects and ramifications. Asia, specifically East Asia, undoubtedly is and will be the major scene in this rivalry, but it will not be the only one. Redefining relations with China for Canada should be conducted in conjunction with allies and close partners to determine a common, or at least non-conflictual, approach to dealing with an increasingly assertive global power which is integrated within many political-economic systems and processes, thus posing far different challenges than previous great power competitors.

Importantly, this is not as such a question of fundamentally rethinking Canada’s alignment with the United States and trying to create a third power bloc alongside them and China. Rather, this is about strengthening relations with like-minded powers to think and act on how we can collectively counter China’s hegemonic pursuits while preserving the international order, especially when the current US administration seems, at best, ambivalent towards the project.

Adam P. MacDonald is a PhD student in the political science department at Dalhousie University. Carter Vance is a graduate of Carleton University’s Institute of Political Economy and was formerly a junior research fellow with the NATO Association of Canada.

What’s wrong with a Great Rebuilding of the economy post-COVID-19: Philip Cross in the Hill Times