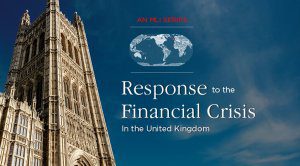 Graham Brady makes the case of deficit reduction and sound public finances, based on the UK’s recent experience.

I have read this essay collection – including the excellent essay by the Centre for Policy Studies (CPS) economist Daniel Mahoney on Britain’s ongoing battle with its budgetary deficit – with great interest. The lessons from across the Anglosphere should not only catalyse a fiscal policy debate in Washington but also in our own countries.

As deputy chairman of the CPS, chairman of the parliamentary group of the UK Conservative Party, a Member of Parliament, and someone who has long fought for responsible spending and balanced budgets, I certainly hope it does.

The case for deficit reduction and sound public finances can never be neglected or taken for granted. It is so easy to find voices for more spending and budgetary deficits. Unfortunately, there are too few for spending within our means or thinking about future generations. These essays can serve as such a voice now and into the future.

The United Kingdom’s experience over the past two decades or so can be a case study in this regard. When I was elected for the first time in 1997 the national debt was roughly 38 percent of GDP. It now exceeds 85 percent. It does not take long to make a “fiscal mess” as I described it in the 2014 Keith Joseph Memorial Lecture at the CPS.

What happened? Mahoney’s essay provides a useful primer on the conditions and choices that led to such a mess. But it is not really that complicated. The previous government increased government spending as a share of GDP by 10-percentage points in roughly 12 years. It was able to do so through large-scale deficit spending. The annual budgetary deficit reached over 10 percent by 2009-10. The incoming chief secretary to the Treasury in 2010 was given a note by his Labour predecessor that simply read “I’m afraid that there’s no money.”

The case for deficit reduction and sound public finances can never be neglected or taken for granted.

It was a daunting challenge. I am pleased that we were up to it. The government from the Prime Minister to the backbench was committed to cleaning up the mess that we had inherited. It involved tough choices. This should not be diminished. Containing spending is never easy. The critics can be loud. But we did not flinch. The entire Conservative Party was committed to what we said in the 2010 Queen’s Speech: “The first priority is to reduce the deficit and restore economic growth.”

The good news is that there has been important progress on this score. The deficit as a share of GDP has been cut by three quarters. It is soon projected to fall below 1 percent of GDP for the first time since the start of this century. UK economic growth has been among the fastest in the industrialized world for the past few years. Male employment is at a level not seen since 1991. Female employment is at the highest rate since 1971. We are making progress on the goal set out when we were first elected.

I would be remiss if I did not point out that this progress stands in stark contrast to the doomsday scenario that the International Monetary Fund (IMF) warned about when we launched on our deficit reduction agenda. We were told that we were “playing with fire.” The fund’s advice was to “loosen the fiscal straitjacket” that the government was purportedly imposing on the UK economy.

But the facts speak for themselves. The IMF and other critics had underestimated how our debt and deficits were undermining investor and consumer confidence and acting as a drag on the UK economy. The IMF has since had to admit it was wrong. Christine Lagarde, its managing director, conceded in 2014: “We got it wrong. We acknowledged it. Clearly the confidence building that has resulted from the economic policies adopted by the government has surprised many of us.”

The IMF and other critics had underestimated how our debt and deficits were undermining investor and consumer confidence and acting as a drag on the UK economy.

What does this mean for my US counterparts? There are, in my view, a few key lessons to be derived from our experience.

The first is not to listen to the naysayers. The voices in favour of more spending and higher deficits are loud and well-organized but ultimately wrong. A government cannot spend its way into prosperity. It can only ultimately spend its way into a fiscal mess. It requires political commitment and a clear vision to resist these voices. I say tune them out. We have the evidence on our side.

The second is that politicians must be honest and transparent with the voting public about their intentions and plans. The public is more attuned to the need for governments to spend within their means than the pundits and commentators give credit. People get it more than some politicians think. But they expect us to be plain about what we are doing and why we are doing it. It is why for instance I said in my 2014 speech that “the road to be walked by the next government and the one after that may involve just as many tough choices as have been faced in this parliament.” There is no point in sugar-coating it. Honesty and transparency is by far the best way to achieve and sustain public support for fiscal reform.

The third is to stay the course. Stopping before the job is done risks undoing public support and eroding economic confidence. Now, of course, it does not mean that there is no room for refinement or improvements. Our government has made some useful tweaks that have strengthened our fiscal reforms. But flinching due to political timetables or other considerations would put any progress at risk. No one is better off in such a scenario in the short- or long-term.

I have been proud of our government’s efforts to clean up the United Kingdom’s fiscal mess. It remains an ongoing project but the progress is undeniable. We are making a difference – including for future generations who for too long had been voiceless in UK fiscal policy.

I am confident that my US counterparts can achieve similar progress with a firm commitment, clear vision, and sensible plan. It starts by listening to the right voices. I hope that these lessons and the details set out in this essay collection can help.

How to tackle a $14.8 trillion debt: Lessons from America’s friends in the Anglosphere

Britain’s deal with Canada must be the start of something bigger: Blair Gibbs in CAPX

A Tour Around Brexit Britain: Elliot Tepper on CTV News

How to tackle a $14.8 trillion debt: Lessons from America's friends in the Anglosphere