Britain’s deal with Canada must be the start of something bigger: Blair Gibbs in CAPX 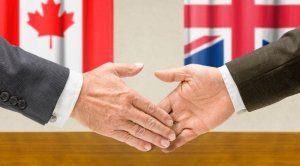 The ‘continuity’ trade deal agreed in principle today with Canada will mean that at the end of the Brexit transition on December 31 there will be no additional barriers to trade with one of Britain’s closest partners, writes Blair Gibbs in CAPX.

The ‘continuity’ trade deal agreed in principle today with Canada will mean that at the end of the Brexit transition on December 31 there will be no additional barriers to trade with one of Britain’s closest partners. The agreement is the second high-profile one secured by the British government with a major economy since the deal with Japan in the summer, and another victory for Trade Secretary Liz Truss.

The absence of such an agreement would not have been a disaster, and the continuation of the existing CETA provisions that Canada signed with the EU in 2017 will not mean much to voters in the UK, but it is a tangible example of the new Brexit reality and somewhat undermines the narrative that the Covid pandemic has completely disabled government and nothing else is getting done. On top of the Ten-Point Plan for a Green Industrial Revolution and the long awaited boost to defence spending, the trade news topped off a good week for the Prime Minister.

Avoiding the disruption and cost of tariffs and import charges is an important first step, given that UK trade with Canada is valued at £20 billion a year and the UK is Canada’s third largest export market after the US and China. But the Johnson government knows that the benefits of Brexit in the long term really depend on more ambitious bilateral trade agreements that are tailored for each side.

Even where two parliamentary democracies share a deep history, this does not mean that trade deals between their two economies are easy to agree. There are areas of misalignment and therefore special interests that will need to be accommodated for any deeper deal to be landed.

Canada’s economy is less dependent on services than the UK, and more reliant on manufacturing and natural resources. It also has outdated supply management regimes for major farming sectors like dairy – essentially price-setting that forces Canadian consumers to pay far more than Americans for basics like eggs, cheese and milk. Their auto industry has also been a beneficiary of massive state aid – including very recently with the federal and provincial governments both contributing hundreds of millions to the industry deal that will bring a major electric vehicle programme to Ford’s Oakville assembly plant in Ontario.

These sectors where there is major government intervention could present challenges for the UK negotiators, although our own post-Brexit approach to state aid may make it less of a hurdle than it was. If such subsidy issues can be overcome, there will be elements of a full-fat Canada trade deal that should excite both sides. It should mean that British consumers enjoy cheaper prices for the world’s best steaks from Alberta and wild salmon from British Columbia, and Canadians could look forward to having proper British cheese and Welsh lamb available in supermarkets. Breaking into the price-controlled Canadian dairy industry will be a personal priority for the Trade Secretary – and it would be a disgrace if it was not.

In recent months, interest in the trade deal agenda has started to revive. The Regional Comprehensive Economic Partnership Deal – a pact between China and nine other south-east Asian nations signed last month – was a major geopolitical coup for China. And since the US election, hopes are rising that the Biden administration will restore America’s support for some existing global free trade agreements and quickly rejoin the Comprehensive and Progressive Agreement for Trans Pacific Partnership (CP-TPP) agreement that the Trump Administration bailed out of in 2017. The replacement for NAFTA – called CUSMA – is already in place, so Biden has no heavy lifting to do there, but its provisions will complicate any deeper trade deal that any one of those three member states might do in the future with the UK (given how CUSMA prioritises reshoring of manufacturing to the North American market).

After the pandemic and as the global economy contracts, trading freely with more countries will become an even bigger political priority. The long Covid impact on the UK’s economy is going to be so brutal that even complex trade deals that seemed optional after 2025 will become desirable much earlier – especially with some of the emerging markets that have strong domestic demand for British goods, including Mexico, South Africa and South Korea.

This is why existing multi-lateral or regional trade pacts, like CP-TPP could prove an attractive goal for the UK before deeper bilateral deals can be concluded, even though we still do not know if the current members of that Pacific pact would agree to admit us. Given that bigger deals will take years to conclude – with discussions with Canada due to start in 2021 – the process itself should also encourage more debate about how other partnerships can be strengthened at the same time.

With Canada the UK has opportunities on many fronts. Mutual recognition of professional qualifications is one area, with major benefits to the UK if Canadian provinces can accept the legal training of British lawyers and accountants – a recent sticking point in the EU negotiations – and another is mobility. Trade and migration are not usually linked in agreements, although major deals like NAFTA contained bespoke visa routes for select occupations under the treaty to facilitate commerce. We can expect this to be a feature of the dialogue over a trade deal between the UK and India, but there is no reason why a deeper trade agreement with Canada should not extend into mobility as well.

This might mean special visa rules allowing workers and students to take up residency more easily between the two countries. Canada remains a very pro-immigration society, but even in the UK the public have shown more openness to immigration, depending on where new migrants come from (rather than simply their skills or what jobs they are coming to do) – and Canada remains incredibly popular in Britain. Fortunately, the UK has kept the door ajar for adding additional preferential migration routes for certain countries in future, partly in order to keep a bargaining chip for full trade negotiations.

If Brexit is going to deliver greater prosperity, then comprehensive trade deals are essential. Who will benefit from the deals that are struck – and how much Britain’s relative inexperience in negotiating such agreements will ultimately matter – is still unclear. However, the British government is now engaged in a global exercise in coalition-building and industrial diplomacy that was wholly outsourced to Brussels for four decades. Eventually, our own parliamentarians are going to need to pay closer attention to what new trade agreements mean, and give them the scrutiny that voters expect.

Blair Gibbs is a former No10 advisor to Boris Johnson and now a Director with Public First and a Research Fellow at the Centre for Policy Studies.