Report by Philip Cross: Resources are more important to Canada than you think, and that’s a good thing 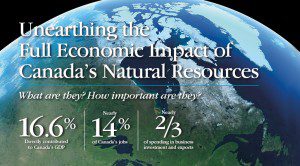 In 2010, natural-resource industries contributed $260 billion to the national economy – about 16.6 per cent of GDP. The report also shows that each dollar of increased resource output contributes $2.32 of economy-wide GDP.

“Only by embracing our rich endowment and history of natural resources will Canada extract their full value”, Cross writes.

To read the paper, titled “Unearthing the Full Economic Impact of Canada’s Natural Resources: What are they? How important are they?”, click here.

“Since business investment has leaned so heavily in developing our natural-resource base in recent years, resources are destined to play a key role in Canada’s economy for decades to come”, Cross writes.

Cross’ paper makes a number of other key findings:

Part of the problem with properly analysing the impact of resources in the past has been an absence of agreement on what industries should be included. Various institutions and reports all have different ways of measuring resource staples.

Cross proposes a definition that includes all of the primary industries, including utilities. It then adds industries that rely on resources for greater than 17 per cent of their inputs, which includes such sectors as primary metal manufacturing, pulp and paper manufacturing, and pipeline transport.

Event review: Coyne and Pepall debate whether Canada’s democracy is in crisis in the third Great Canadian Debate of 2015