Paul Gendreau in Inside Policy: Solitary confinement debate shows how science has been sidelined

In the April 2015 edition of Inside Policy, the magazine of the Macdonald-Laurier Institute, UNB Professor Emeritus Paul Gendreau laments that science has been sidelined in the debate around solitary confinement. 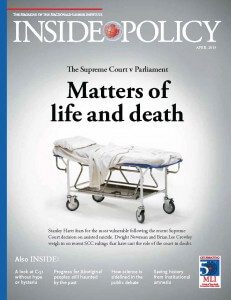 The use of solitary confinement in Canadian prisons is highly controversial. Last December the Globe and Mail ran a series of articles and other features on the subject, which began with a debate between Kim Pate, Executive Director of the Elizabeth Fry Society, and me.

Globe readers were asked to vote on the “winner” and provide their reasons for doing so. Subsequently, Howard Sapers, the Correctional Investigator of Canada, a key player in the country on investigating alleged abuses of inmates in prisons, offered his views on the matter. And a number of other contributions and editorials appeared in the paper, the majority of which were highly critical of Correctional Service Canada policies in the matter.

My role in the debate was to present the science story on what is known about the research findings on inmates’ psychological well-being in solitary confinement (SC). Ms. Pate, Mr. Sapers and I differ as to the extent which SC produces adverse mental health consequences.

Inmates in solitary confinement are placed in high security cells which typically limit the amount of auditory, visual and kinesthetic sensory stimulation available. My position is that if the inmate’s behaviour in the situation is monitored in a humane fashion and the physical structure of an SC cell meets acceptable health care standards, and the time spent in SC is two weeks at most, SC by itself is not the primary villain in the story. However, when the correctional “climate” is mean spirited and inmates are treated capriciously, harmful psychological consequences occur for both them and line staff under any type of prison living conditions. The data my fellow researchers and I have analysed suggest SC may not produce dramatic psychological effects. However that is not a justification for relying on it as a management tool except in those situations where the security of inmates and staff is clearly put in jeopardy. In my opinion, SC is an indolent, unproductive management strategy. Finally, I should note that there is agreement the scientific evidence on the effects of SC has to be taken into account in future discussions on the topic and policies need to be initiated as soon as possible to reduce its use. I provided examples of humane policies that should be pursued in this regard.

The experience has strengthened my belief that the scientific evidence presented on this kind of media story tends to have far less impact than one might hope.

To test my hypothesis I conducted a survey of the comments of the 85 online readers who commented on the op-ed pieces written by Kim Pate and me. I well realize that this sample is small and likely unrepresentative, so the results should be treated very cautiously. But for the record, they were what I anticipated: 34 per cent favored the use of SC, 26 per cent did not, and 20 per cent saw a limited role for its use while 20 per cent discussed tangential matters. What was noteworthy for what follows was that only six responders alluded to the scientific evidence and four dismissed it as incorrect. Clearly, the science story played a distinctly minor role in the minds of the 85 respondents.

From a policy-making perspective this is deeply concerning, but not surprising. Surveys show that while the public claims they generally trust the sciences, scientific data that are well grounded in theory and evidence are often ignored or disputed when it comes to “hot button” topics such as evolution, climate change, certain health care treatments and in other social policy domains such as education, economics and criminal justice. It has been estimated that about 40 per cent of the public adhere to pseudoscience explanations when it comes to these types of topics and, moreover, about 70 per cent cannot understand a science story written in the print media, according to research published by Jon Miller at Michigan State University.

Why is this the case? First, scientific literacy does not come easily to anyone. It is much less demanding on the intellect to rely on “commonsense” opinions which often serve as a convenient smoke screen for employing pseudoscience rationalizations of beliefs. By this I mean where knowledge is qualitative and justified by anecdotes, confirmation bias, intuition, and testimonials, and the reasoning process relies on examples that are the most recent in memory (availability heuristics), “exceptions prove the rule”, illusory correlates, and “what everybody knows” assertions.

Science stories, on the other hand, are complex and, sometimes, counterintuitive. To understand a science story requires a solid grounding in the theory and content of an area. Furthermore, familiarity with statistical reasoning and the type of research designs required to test hypotheses is critical to have confidence that the research findings in question are valid and replicable. As well, readers may not realize the amount of evidence that must be reviewed and analysed to arrive at a conclusion about an issue such as solitary confinement. If they were, it is plausible a science story might appear more convincing. For example, my brief Globe article was based on several hundred studies from three streams of literatures relevant to the topic (the effects of prison life in general, the sensory deprivation studies on non-inmate samples, and SC on inmates). The analytical process utilized was meta-analysis which has become the gold standard for “making sense” of research findings in the social sciences and medicine.

Indeed, even people trained in the sciences struggle to understand science narratives. A 20-year survey on a measure of scientific literacy at a major state university reported senior undergraduates who had taken science courses only showed small gains in literacy of about 15 per cent from when they were freshmen. There are also examples of esteemed scientists, some of them Noble prize recipients (e.g., Linus Pauling; James Watson), who embarrassed themselves by misinterpreting data and theories outside their specialty areas.

Lastly, other reasons that hinder respect for science stories are the news media (see the crusade in some outlets against climate change, environmental issues, evolution, etc. for political agendas which  are supported by vested commercial and political interests) and the Internet where there are no filters against the validity of information.

Regrettably, scientists have not helped their cause either. It has been revealed that in some areas of medicine and psychology there has been a failure to replicate findings which, in the opinion of some, are due in part to publication pressures, career self-actualization, and the misuse of statistics to inflate results.

Are there solutions to these three general problems? I will address these in order.

Do not expect scientific literacy to flourish anytime in the near future. The National Academy of Scholars’ study of science curricula in the general arts for the top 50 universities in the United States found science requirements dropped from 90 per cent to 34 per cent. I do not have comparable Canadian data except to note from the Organization for Economic Co-operation and Development data set that student and adult math and science skills have slipped compared to other nations. And, from my observation, there seems to be a trend for more university courses in some disciplines that have found a comfortable home for qualitative research and exposing students to views that are hostile towards empiricism.

One can wish for high-profile scientists to weigh in on matters. Blogs are one avenue. They seem to have more influence than traditional publication routes in professional journals that have long delays in publishing, are written in jargon and read by only a few “insiders”. Economics has taken the lead amongst the “softer” sciences in this regard. Paul Krugman, for one, comes to mind because of his academic stature (Nobel laureate) and his position at arguably the most influential newspaper in the Western world, the New York Times. His use of graphs makes the data accessible for readers, a method that is more effective than just relying on narratives or statistical tables to make a point.

On a positive note, some social sciences – psychology leads the way – are insisting on replication of studies to increase the accuracy of the disciplines findings. Thus, the quality of work will improve in the future.

Despite these considerable barriers, maybe a few successes are all one can hope for in having science stories translate into policy action. Forty years ago the distinguished psychologist, Donald Campbell achieved prominence in social policy circles in North America by advocating that social policy reforms should be based on replicable experimental findings. Believers of this initiative like me naively thought there would be a high success rate and a fairly immediate one at that, but that was another time, and maybe the positive feeling about this agenda even then was a mirage. Obviously, the bar has been set too high.

I have estimated a 30-per-cent success rate for policy being based on sound scientific evidence for the criminal justice field. Let us hope, for the sake of all concerned in promoting humane policies for the management of prisons, that the general thrust of scientific evidence promoted by those of us involved in prison research and corrections in general will be realized.

Paul Gendreau is Professor Emeritus at UNB and has an appointment with the University of North Carolina, Charlotte. He is a former president of the Canadian Psychological Association. In 2007 he was appointed an Officer of the Order of Canada. Readers interested in more information can contact him at paulgend@bell.net.

Jeffrey Simpson in Inside Policy: Progress for Aboriginal peoples still haunted by the past

Eric Marks in Inside Policy: Save Canadian history from cultural amnesia

Eric Marks in Inside Policy: Save Canadian history from cultural amnesia