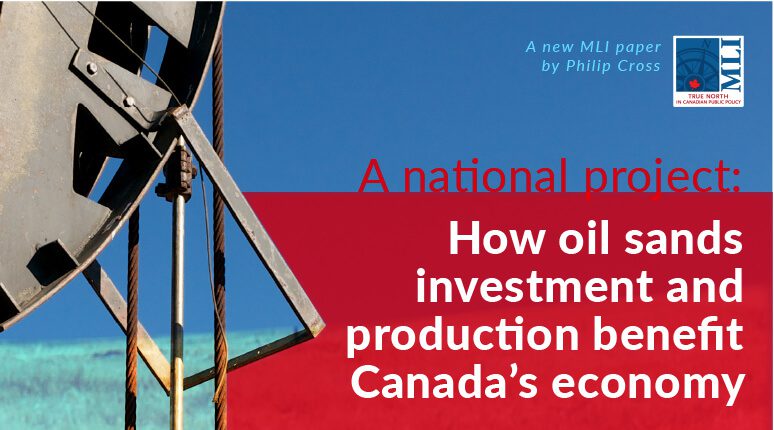 OTTAWA, ON (April 29, 2021): While blue-collar work is being devastated in much of the rest of the Western world, Canada’s natural resource sector continues to be a pillar of stability and opportunity in the economy. In particular, with its high paying jobs in Canadian-owned businesses, the oil sands offer a stable, reliable, and growing sector of the economy that is shielded from cyclical downturns.

In a new MLI study titled “A national project: How oil sands investment and production benefit Canada’s economy,” MLI Senior Fellow Philip Cross examines the sector in terms of production and investment, finding that the oil sands continue to develop apace despite roadblocks and persistent, unfounded pessimism about the viability of the sector. Furthermore, it is clear the oil sands provide substantial and wide-ranging benefits to Canada as a whole – benefits that extend well beyond Alberta, even before accounting for transfer payments.

Drawing from Statistics Canada data, Cross’s paper analyses what effects would occur if both investment and production were to increase by $10 billion each. The results demonstrate that a vibrant and healthy industry not only has significant impact on GDP, but also on employment outcomes in Alberta and throughout Canada.

If investment in the oil sands were to increase by $10 billion, a viable number given global market trends, Cross estimates that over 81,000 jobs would be created, of which over 20 percent would occur outside of Alberta. This would result in an over $6 billion boost in labour income. Similarly, if production were to increase by $10 billion, labour income would grow by over $3 billion and nearly 40,000 jobs would be created, with a third of the job creation occurring outside of Alberta.

Cross’s analysis shows that production and investment have different impacts on the economy, with investment producing a short-term boom and production creating more significant long-term benefits that protect the industry against turmoil. While Alberta would be the primary beneficiary of such expansion, the rest of Canada would also see substantial benefits in GDP and employment growth, with a total Canada-wide GDP growth of 0.5 percent. Ontario would be the largest beneficiary outside of Alberta, reaping 9 percent of the total increase.

While substantially less than at its peak at the height of the oil boom in 2014, oil sands investment – totalling $8.3 billion in 2020 – is still 4.5 percent of all business investment in Canada. This exceeds all investments made by the retail trade industry, construction, or all business services, and is four times more than auto manufacturing.

Meanwhile, production remains high and has increased almost every year from 1991 until 2020. Undergirding this growth in production is increased demand in the US. In the long-term, oil production will be sustained by the increased global demand for hydrocarbons alongside depleting US shale reserves.

Ultimately, the oil sands are here to stay, representing “a uniquely Canadian success story and an increasingly rare example of innovation in Canada,” writes Cross. However, for this success to continue, more innovation is required to reduce operating costs and curb emissions. “The track record of relentless innovation by the industry suggests such an outcome is eminently possible.”

To learn more about the impact of the oil sands on Canada’s economy, click the button below.