Turning off the horns was a short-term solution to a serious problem, writes Ken Coates. But it behooves all national political parties to lay out coherent plans for the nation’s future 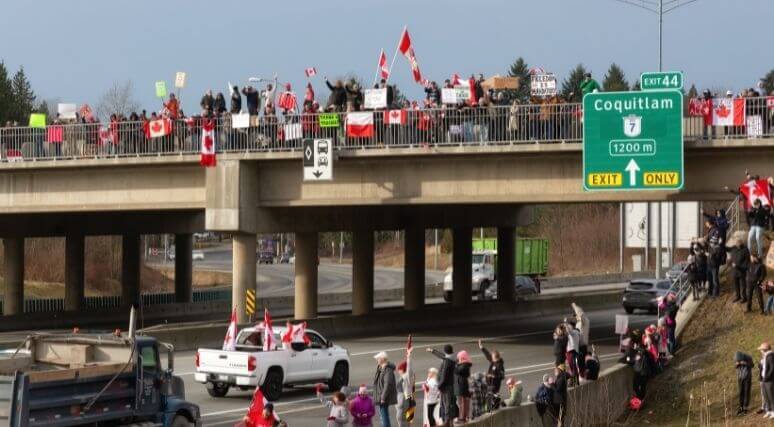 The truckers have finally left the Ottawa, the good citizens of the nation’s capital have their city back, and the police have re-established their credibility. The Emergencies Act, a serious over-reaction from the outset, was a damp squib that unnecessarily sullied the Canadian political landscape. And the path forward is unclear.

Recriminations will follow and the damage, when fully described, will be dramatic. The organizers and spokespeople of the Freedom Convoy will face intense scrutiny for their tactics, statements, and actions.  They will be found wanting, as stories surface about the boorish behaviour of protesters, the mistreatment of shop owners, serious misrepresentations of Canadian law, politics, and individual rights (Miranda Rights do not apply in Canada!), and potentially, the use of donated funds.

The Trudeau government mismanaged the protest from the outset – just as they had already alienated many Canadians with their management of the pandemic. Prime Minister Trudeau’s bitter and inaccurate representation of the protesters as an unruly group of racists and dangerous radicals completely failed to rally the country to his side and gave strength to the movement.

Members of the government caucus are clearly upset with the handling of the crisis, although the vaunted Liberal party discipline kept the cabinet ministers in line. The New Democratic Party exposed significant internal tensions by abandoning the civil libertarian tradition of former leader Tommy Douglas in favour of following the Liberal’s lead.  Leader Jagmeet Singh has rarely been as out of touch with his party’s roots.

But the centre-right part of the Canadian political spectrum is also in turmoil. The People’s Party of Canada will no doubt attempt to tap into the fundraising acumen, libertarian sentiments and national anger unleashed by the convoy. If this translates into electoral success, look for a significant recasting of the political landscape. The Conservative Party, for its part, is flirting with electoral and political disaster, casting aside Erin O’Toole’s cautious approach for as yet unknown leadership and trying to play to both sides of the protest movement. The party that historically speaks for the enforcement of the law will have to decide where it stands going forward.

So, where does the country sit now that the horns have been silenced? Most Canadians support the government’s vaccine mandates, but the nation is tired, angry and unsatisfied by two years of pandemic restrictions and serious government overreach in non-health related areas. It is hard to imagine any political party gaining the public’s approval and easier to anticipate widespread political unruliness in the months ahead.  If nothing else, the convoy unveiled a streak of libertarianism and anti-government sentiment that one or more political parties is going to exploit.  To say there is political unease in the land is to understate the situation dramatically.

While most commentators like to blame these processes on the Americanization of Canadian politics and the spread of Trumpism to Canada, the current political malaise is of longer and more serious standing. Western isolation from the Canadian mainstream is long-standing. The alienation of rural and small-town voters is deeply embedded in Canadian politics and, by itself, never grabbed the attention of the media or the national parties.

Canada has long spoken of the power of the “Laurentian elites” and the authority of the Toronto-Ottawa-Montreal triangle remains dominant. But real electoral authority rests with the mega-cities in Canada, which effectively run the country, not always to the benefit of the nation. Canada’s major cities are among the very best in the world and should be a source of national pride. But when this massive power base turns its back on the rest of the country, well, protests happen.

The marginalization of the working class is somewhat new, a function of the failure of the political parties to acknowledge and respect the difficult transitions that they are facing. The New Democratic Party’s reorientation toward urban voters and the public sector union and the Conservative Party’s inability to show strong and ongoing concern about the workers whose labour underpins Canadian prosperity have left them without an obvious home. The Liberal Party’s overwhelming “wokeness” is extremely alienating to people whose life challenges are not defined by identity politics.

The lack of attention to Canadian workers will prove to be of long-term significance. As the convoy demonstrates, new technologies allow for united action and sustained mobilization in a manner that old-style party organizers can only envy.

Most significant, perhaps, is the emergence of anti-government sentiment as a national political force. These ideas are not rooted in any political party or ideology, but they represent a reaction to the pandemic, two years of government-imposed restrictions, and almost seven years of intense government intervention. For some, the federal Liberal’s “build back better” rhetoric has worried those Canadians most concerned about government overreach and the shocking run-up of the national debt.

Stir in a nervous-making dose of inflation, which the federal government wishes to downplay, and you have a growing number of Canadians who are deeply concerned about state power and government spending. The interventionist financial aspects of the Emergencies Act only feed into this worry about government overreach.

Canada needs urgent attention. The pandemic exposed serious shortcomings in our national health care system and an abject failure in the care of senior citizens. Despite three successive Liberal governments declaring that relations with Indigenous peoples were central to national plans, improvements have been slow and intermittent.  Regional inequalities remain and the rise of cities is reconfiguring national affairs in dramatic ways.  The continuing clash between environmental goals and Canada’s energy sector only adds to the uncertainty.

Turning off the horns was a short-term solution to a serious problem.  It is possible, as the prime minister has indicated, that the end of the Ottawa protests is only a temporary lull in a potentially long and aggressive storm.  But it behooves all national political parties to lay out coherent plans for the nation’s future. We need competing visions of how Canada can emerge from the pandemic malaise with the confidence and determination needed to make headway in an increasingly tense and divided world.

Ken Coates is Canada Research Chair in Regional Innovation at the Johnson Shoyama Graduate School of Public Policy, University of Saskatchewan. He is a distinguished fellow with the Macdonald-Laurier Institute, with responsibilities for Indigenous and northern issues.