Without an Indo-Pacific Economic Framework, the US is going to be challenged in dealing with an increasingly assertive China in the region. 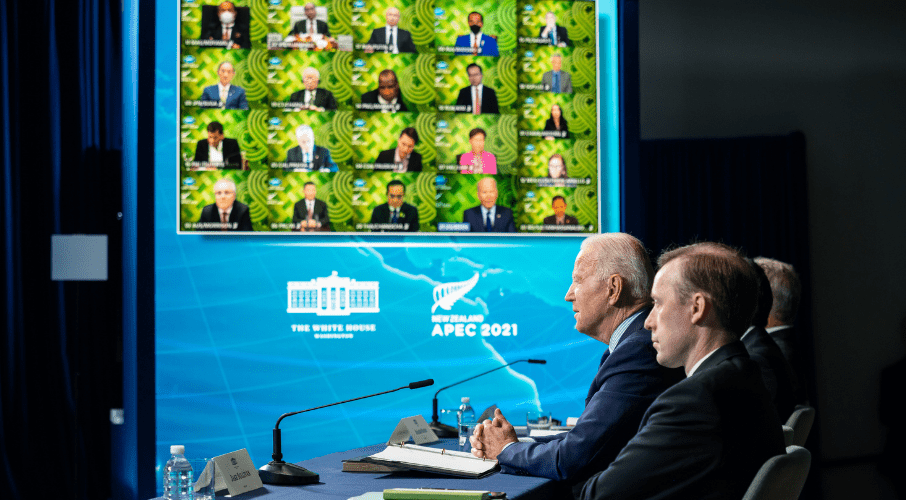 This article was originally published in 9DASHLINE.

Immediate geographic stakeholders in the Indo-Pacific prioritise trade, even with challenging neighbours, such as China. As a consequence, they pursue a non-zero-sum approach in their engagement within the region. Evidence of this approach can be seen in the policies pursued by Australia, Japan, and South Korea.

All have suffered from various forms of economic coercion from China in recent years, but they still signed the ASEAN-centred Regional Comprehensive Economic Partnership (RCEP), which came into force on 1 January 2022 and includes China. We also see the current members of the Comprehensive and Progressive Transpacific Partnership (CPTPP) continue to try and expand the agreement by including the UK, Taiwan, China, and South Korea, all of whom have applied to join the agreement.

What does this say about Indo-Pacific stakeholders? First, they prioritise trade as the foundation for their prosperity and engagement within the region. Second, they take an uninhibited approach to trade. Both Australia and Japan have joined the RCEP that includes China, but they were also key partners in forging the CPTPP, which excludes China at this stage. Third, Indo-Pacific stakeholders all prioritise development, trade, infrastructure and connectivity, and engagement with China while at the same time creating deterrence capabilities through strategic partnerships.

A purely market-based approach to trade clearly will not get buy-in within the region. Nor will a trade policy that is highly securitised and prejudices China in various ways.

The recent Reciprocal Access Agreement (RAA) between Japan and Australia, the continued strengthening of the US-Japan alliance, as well as bringing in extra-regional partners like the EU into agreements — such as with the Japan-EU Economic Partnership Agreement (EPA) and the Japan-EU Asian Connectivity Initiative — speaks to the multi-layered and multilateral approach many Indo-Pacific states are pursuing to deal with China.

Washington is failing to address the multi-layered and multilateral approach that many states in the region have adopted to deal with both China and the specific needs of stakeholders within the region. These needs include balancing their trade-dependent relationship with China, and their nuanced approaches to security challenges with China, as emphasised in the annual State of Southeast Asia surveys. The survey findings stress that the “least popular option when dealing with US-China strategic competition is ASEAN choosing sides between one of the two major powers”. Southeast Asian leaders, such as Singaporean Prime Minister Lee Hsien Loong, have re-emphasised that point, writing explicitly that “Asian countries do not want to be forced to choose between the two”.

A purely market-based approach to trade clearly will not get buy-in within the region. Nor will a trade policy that is highly securitised and prejudices China in various ways. States in the region have a decades-long tradition of a hybrid economic development model in which the state plays an important role in the economy, especially by funding infrastructure and connectivity projects.

Accommodations needed on both sides

For the Biden administration to develop a successful Indo-Pacific Economic Framework, it will need to get stakeholder buy-in. At the same time, stakeholders within the Indo-Pacific will have to acknowledge some of the geo-economic, geo-technological, and other security concerns that the US and like-minded countries have regarding China.

On the geo-economic side, there’s growing clarity that the weaponisation and monopolisation of trade, as well as Black Swans such as the COVID-19 pandemic, can and did negatively affect supply chains and commerce in the region. This highlights the critical need for selectively diversifying both trade and supply chains to protect against these three trends. On the geo-technological side, the intensifying competition between the US and China – especially over who will produce the rules and regulations of the digital economy and how privacy and the localisation of data will be protected – are important concerns.

Therefore, any Indo-Pacific Economic Framework will need to address what the Eurasia Group’s 2022 risk report calls a “Technopolar World”. That includes competition over an open versus a closed internet, the role of governments concerning surveillance of their own and other countries’ citizens, as well as the rules of the road for Web3, a new internet phase that will be based upon decentralisation, openness, and greater utilisation for individual users.

Here, the digital chapters of the Japan-US mini trade deal agreed in September 2020, and the 2019 G20 Osaka Leaders’ Declaration of a roadmap for data free-flow with trust (DFFT), may provide avenues for thinking about geo-technological competition and the digital economy. Similar chapters in the current CPTPP may also offer useful guidelines for a legal framework to protect data privacy while strengthening the digital economy.

Indo-Pacific stakeholders also need to consider the real security challenges in the region. These are central for the US and many like-minded countries, as China continues to challenge the rules-based order in the region. Grey-zone operations in the South China Sea and East China Sea, lawfare in the East China Sea eroding Japan’s sovereignty claims over the Senkaku Islands, and the extension of domestic law to international waters through the adoption of a new Coast Guard Law in January 2021, clearly demonstrate China’s revisionist intentions.

While South Asian, Southeast Asian, and Northeast Asian countries all have their own sub-regional geopolitical dynamics to negotiate, they also need to understand the priorities of the US to successfully anchor the United States within the region through an Indo-Pacific Economic Framework.

They can do so by leveraging emerging institutions — such as the Quadrilateral Security Dialogue (Quad) and the AUKUS agreement — to provide some comparative advantages in terms of AI development, quantum computing, cybersecurity, and hypersonic missile development within the region. All four areas are clearly understood as key technologies that will shape governance, economies, and the boundaries of competition in the Indo-Pacific region.

A key role for regional powers

Pivotal regional powers will play an important role in ensuring the Biden administration’s successful pursuit of an Indo-Pacific Economic Framework. Japan, arguably the most forward-leaning ally in the region, as well as Australia, have a key role in communicating the US administration’s priorities to Southeast Asia and South Asia, but equally communicating the needs of Indo-Pacific states to the US.

Second, Southeast Asia and ASEAN have a critical role in bringing together the community through the so-called ASEAN way. This will be increasingly difficult as China does practise divisionism against ASEAN states. But for the Indo-Pacific Economic Framework to be successful, acknowledging ASEAN centrality and its consensus-based decision-making process will be important.

Lastly, we need to think about South Asia’s role in supporting a new Indo-Pacific Economic Framework. To date, India has been hesitant to join free trade agreements, having pulled out of RCEP. India needs to demonstrate how it can be a partner for the US to engage in that region through the Indo-Pacific Economic Framework, either via trade and technology or using the Quad as a platform for cooperation in areas where New Delhi feels it can add value.

Without an Indo-Pacific Economic Framework, the US is going to be challenged in dealing with an increasingly assertive China in the region. China’s comparative advantage of being located in the region, its extensive economic ties, and the use of the Belt Road Initiative (BRI) to build social and economic relations within the region demands that the US, working with like-minded countries, creates an Indo-Pacific Economic Framework that not only competes with Chinese initiatives but also offers new initiatives and frameworks for integrating the region. That includes inculcating a rules-based order, transparency, and good governance in the region to deal with the challenges emerging in the Indo-Pacific.

Dr. Stephen Nagy is a a senior fellow at the Macdonald Laurier Institute.