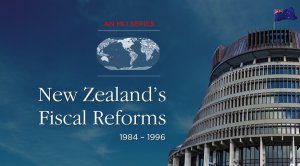 New Zealand’s former Finance Minister Ruth Richardson comments on policies and politics of fiscal reform. This is the foreword to the MLI Lessons from the Anglosphere series paper: New Zealand’s Fiscal Reforms, 1984-1996, by Bryce Wilkinson.

Uncomfortable truths from the French Prime Minister a day after the pomp and ceremony from his boss President Macron who staged his State of the Union address in the Palace of Versailles promising a “profound transformation.”

Public spending and debts at unsustainable levels have unhappily been an enduring blight on the prospects of most nations.

New Zealand in the early nineties when I became the Minister of Finance was no different. I was about to turn 40, and never in my adult lifetime had NZ balanced its books. We ran deficits to fund all too often inefficient and ineffective public spending and we had racked up huge debts in a doomed attempt to borrow our way out of structural deficiencies in our earning power.

I was determined that our road to fiscal redemption would be swift and sustainable.

This foreword is not so much about the numbers, impressive as they have become, but about the policies and politics of reform.

Public spending and debts at unsustainable levels have unhappily been an enduring blight on the prospects of most nations.

We instituted an independent but accountable framework for our central bank, with an explicit inflation policy target contracted between the Governor and the Minister of Finance.

We instituted a performance management regime in the public sector with private sector style disciplines. Public officials were hired on merit and under contract and public finances were subject to generally accepted accounting practice. The budget moved from input to output allocations with government departments funded under stated performance classifications and responsible for every element of their balance sheet produced in accordance with the accrual rules.

It was left to me to complete the reform setting with the introduction of legislated fiscal rules. My Fiscal Responsibility Act of 1994 was a fiscal game changer at three levels.

The stated principles of fiscal responsibility were the first attempt to discipline the conduct of public finances by a defined set of fiscal rules designed to produce prudent levels of debt, balanced budgets, improved net worth, management of fiscal risks and predictable tax rates.

Principles are all very well, but the embrace of an open budget regime with the requirement to publish a budget policy statement prior to the presentation of the budget, a fiscal strategy report at the time of the budget and again at the half year, and a pre-election fiscal update all combined to bake in better budget behaviour to bolster the rules.

Finally the reporting requirements to a GAAP (Generally accepted accounting principles) standard not just secured the credibility of the figures, but enabled management of public finances at every level, cash, capital and contingent liabilities.

I became the first Finance Minister in the world to produce the Financial Statements of the nation in accrual form in 1992.

This financial architecture allows a proper assessment not just of the current state of the books but of the long term fiscal position. Importantly it allows an investment approach to be taken to each and every government intervention; social, economic, environmental, scientific, business and infrastructure.

The most recent Statement on the Long Term Fiscal Position (2016) opens on this note:

There is a dynamic relationship between New Zealand’s long-term public finances and inter-generational well-being. Intergenerational well-being relies on the growth, distribution and sustainability of the four capitals- financial and physical capital; human capital (e.g. health and skills); social capital (e.g. institutions and trust); and natural capital (e.g. water and biodiversity). Firms, households, and the government combine these four capital stocks in various ways to generate flows of goods and services that are consumed by people and enhance their wellbeing.

Sustainable government finances are a precondition to improving long-term living standards. They reduce the risks associated with economic, social or environmental shocks, provide current and future generations with the opportunities to participate in society (by allowing governments to provide essential services and infrastructure), and give more certainty in the future for individuals and governments to plan.

This policy framework has totally transformed the politics of public finance.

The fiscal rules, while allowing some leeway for temporary departure in the face of unexpected pressures (NZ is prone to seismic as well as policy earthquakes), are so compelling that no serious political party would want to flout them for fear of incurring electoral wrath.

In the run-up to the General Election in NZ in September the Opposition Labour and Green parties have agreed on a joint set of budget rules including a pledge to run surpluses and cap debt.

In a further move to reassure voters the two-party Budget Responsibility Rules will be assessed by a watchdog independent of political parties.

The fiscal ‘fight’ is whether net debt should be reduced to between 10-15 percent of GDP (the Government’s target) or 20 percent (the Opposition’s).

Most nations would die for such cross-party discipline, let alone the low numbers targeted.

Each month the Financial Statements of the Government of New Zealand come in my post (the perk of being a former Finance Minister), a more substantial and frequent set of disclosures than shareholders in a public company would receive. The content of these statements and the tracking of the growth in surpluses feature heavily in the business and political media.

What’s more, six weeks before the election there will be a freshly minted Pre-Election Fiscal and Economic Update, signed as to its accuracy by the Secretary of the Treasury. No more the ambush of electoral competitors with faulty or hidden figures during the campaign which licenses all manner of promises to be made only to be broken once the fiscal truth is revealed.

My motivation for the Fiscal Responsibility Act was to radically transform the conduct of fiscal policy and to forever change the politics of public finance.

While I had to start my tenure in 1990 by taking a once in a lifetime axe to the level of public expenditure, my overriding ambition was to see the practice of fiscal responsibility sustained overtime, no matter the cut of the political cloth of the incumbent government.

Layers of sophistication have been added to the framework with Investment Statements that look across the portfolio of government held businesses and an investment approach to social expenditure, but the underlying disciplines endure.

Who would have thought that accrual accounting, output budgeting and fiscal rules would pay such dividends.

The pay off has been handsome – one of the highest growth rates in the developed world anchored by our best in class fiscal and monetary policy.

The tools to figure out real value for money in public spending, and the comfort of buffers from the inevitable adverse events.

Best of all the evolution of a responsible political mindset which is the ultimate guarantor of fiscal responsibility.

The Honourable Ruth Richardson was New Zealand’s Minister of Finance 1990-1993.

China’s new military capabilities a concern for the United States: Davis in The Strategist

Fishing for answers: How an East Coast resurgence could navigate rough waters