It may not be especially helpful with the current oil price crisis but the author of a recent Macdonald-Laurier Institute paper on sovereign wealth funds told CBC’s The Exchange said there’s still time to address past mistakes. 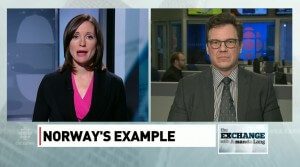 Poelzer is the author of “What Crisis? Global lessons from Norway for managing energy-based economies”.

The paper argues that Canada should follow Norway’s example by taking natural resource revenues out of the hands of free-spending politicians and placing them into investments that can be used over the long-term.

Poelzer says sovereign wealth funds can also diversify a country’s economy, helping to ward off destabilizing forces such as Dutch disease. Norway, has for example, used its fund to invest in biopharmaceuticals.

The paper was also the subject of a story in the Huffington Post and Poelzer spoke with the John Gormley Live show and on CKNW in Victoria.