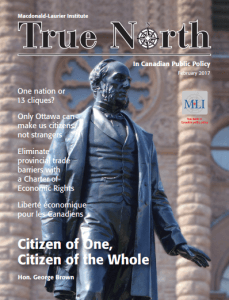 Citizen of One, Citizen of the Whole first launched in 2010 as a road map to liberalizing trade between provinces and territories

OTTAWA, Feb. 23, 2017 – The Macdonald-Laurier Institute is today relaunching a landmark paper to reignite attempts to make good on a key premise of Confederation: The liberalization of trade between the provinces and territories.

Citizen of One, Citizen of the Whole, originally released in 2010, explains why the promise of lower barriers to trade among the British North American colonies helped bring together the disparate entities that would, in 1867, create Canada.

Authors Brian Lee Crowley, Robert Knox and John Robson explain why George Brown, one of the Fathers of Confederation, envisioned a country where each separate colony would be forged into a greater whole.

But in the intervening years this dream collapsed. Today barriers to internal trade in Canada still exist – and, in some cases, they are higher than ever.

“We, on George Brown’s behalf, reissue this paper in the year of Canada’s 150th birthday to remind our national politicians, yet again, that they are failing the founders and failing Canada and failing Canadians”, writes Crowley in the paper’s new foreword.

To read the full commentary, titled “Citizen of One, Citizen of the Whole”, click here.

The big problem, writes Crowley, is the federal government is failing to lead on the issue. Instead, they pass the buck to the provinces, expecting them to sacrifice the political benefits they reap from erecting the barriers in the first place.

It is a policy that has continually failed to liberalize trade between the provinces.

Crowley says that Brown would call the Agreement on Internal Trade, the document many apologists of protectionism point to, a face-saving measure which has consistently failed to deliver the goods.

The promised new Agreement the provinces are to announce in the coming weeks will provide little other than more cant and prevarication, writes Crowley.

Instead, Ottawa needs to make good on the founders’ vision by taking a firm grasp of the internal trade file.

How? By creating a Charter of Economic Rights.

This would force any jurisdiction that offended Canadians’ constitutional right to free economic activity between the provinces to answer to the law.

Then, finally, perhaps Canada will finally make good on the promise of Confederation that George Brown envisioned 150 years ago.

John Robson is a documentary film-maker, a columnist with the National Post, commentator-at-large for News Talk Radio 580 CFRA in Ottawa and an Invited Professor at the University of Ottawa. He holds a Ph.D in American history from the University of Texas at Austin.

Robert Knox was the senior federal public servant responsible for the internal trade file starting in 1986 and the Executive Director of the Internal Trade Secretariat during the negotiation of the Agreement on Internal Trade.

A checklist for cutting out underperforming – and expensive – tax expenditures: Sean Speer in Inside Policy

A checklist for cutting out underperforming – and expensive – tax expenditures: Sean Speer in Inside Policy