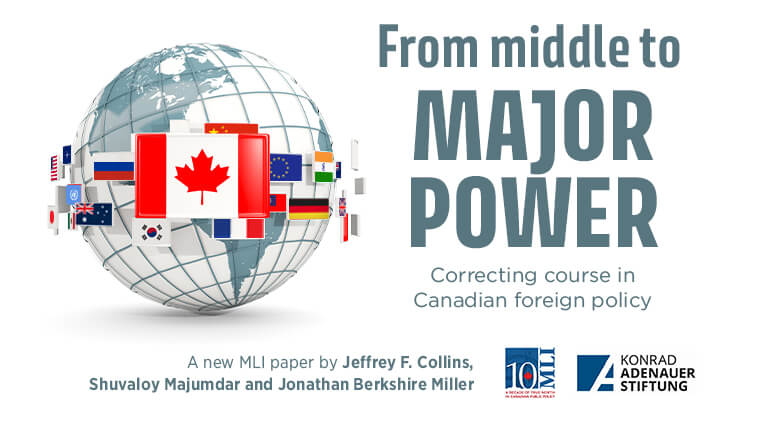 OTTAWA, ON (December 3, 2020): Recent polling suggests that Canadians want our country to engage more in the world and to have more of a say on global affairs. Achieving this requires decision-makers to embark on a bold and ambitious foreign policy plan.

MLI’s newest paper, titled “From middle to major power: Correcting course in Canadian foreign policy,” outlines precisely what that plan for Canada could look like. Written by Jeffrey Collins, Shuvaloy Majumdar, and Jonathan Berkshire Miller, this paper urges policy-makers to define Canada’s place in the world for the century to come.

State power is usually defined on a scale from minor, to middle, to major, to super. Canada is presently best defined as a “middle power,” but far from punching above our weight, Ottawa lacks the willingness to realize our values and interests globally.

The authors argue that Canada’s approach is currently in a state of post-Cold War complacency, and that this static foreign policy is ill-equipped to contend with a rising China, a resurgent Russia, and other authoritarian regimes eager to undermine the rules-based international order. Despite changes in the global reality, Canada’s foreign policy remains fixed.

The authors note that this lack of direction in foreign policy contrasts strongly against the influence Canada demonstrated during much of the 20th century. Both as a significant participant in World War II and an influential contributor to the Western alliance through NATO and other multilateral institutions, much of the last half century was characterized by Canada establishing a place for itself in the world.

The deterioration in Canada’s foreign policy is driven by several factors. Collins, Majumdar and Miller identify the politicization of foreign policy, bureaucratic atrophy, and a fixed mindset toward the Atlantic as the forces holding Canada back. These issues are perhaps best represented by Canada’s “astrategic” approach to China.

Ottawa’s China policy has “arguably been the most damaging setback – whereby a confluence of familial nostalgia, narrow-minded business interests, and vote-banking has opened Canada up to economic coercion and hostage diplomacy by the world’s second-most powerful country,” explain Collins, Majumdar and Miller.

Despite Ottawa dragging its heels on foreign policy, there are many options available to place Canada on a path toward becoming an emerging major power. The authors provide several recommendations for a revamped strategy that promotes our security, prosperity, and values. These recommendations include:

“Canadians deserve the bold ideas that realize their values and interests in the world, rather than be shaped by the interests of others,” write the authors. “The time to act is now.”

To learn more about how Canada can move from a middle power to a major power on the global stage, read the full paper here.

Jeffrey F. Collins is a fellow at the Canadian Global Affairs Institute, as well as a research fellow with the Centre for the Study of Security and Development at Dalhousie University, and the University of Manitoba’s Centre for Defence and Security Studies. Shuvaloy Majumdar is a program director and Munk senior fellow for foreign policy at the Macdonald-Laurier Institute. Jonathan Berkshire Miller is a senior fellow and director of the Indo-Pacific program at MLI.

Finding a Path Forward for the Energy Sector: Ken Coates for Inside Policy