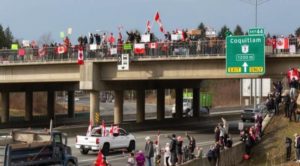 To determine whether a model is useful, you have to see if its predictions are sufficiently accurate, writes Jack Mintz in the Financial Post. Below is an excerpt from the article, which can be read in full here.

With the trucker protest against mandatory health policies still in play, it is no surprise that the controversial Johns Hopkins economic study released last week made the front pages here. Written by Jonas Herby, Lars Jonung and sometime contributor to this page, Steve Hanke, the study estimates that mandatory lockdowns reduced COVID deaths by 2.4 per cent — only marginally. This is a far cry from Imperial College London epidemiology studies from almost two years ago that estimated lockdowns were needed to cut deaths by 98 per cent.

The three authors, only one of whom, Hanke, is actually at Johns Hopkins, conducted a “meta-analysis” of 34 COVID studies focused on March 16-April 20, 2020. Comparing COVID deaths across jurisdictions, they concluded that mask mandates had the largest impact on mortality (-21.2 per cent) with rules such as shelter-in-place (-2.9 per cent) or school closings (-4.4 per cent) having only marginal effects. Other rules, such as border closures, had almost zero impact.

“This can’t be right” was a common reaction to the study. But the authors suggest several plausible reasons why lockdowns may not have been — or seemed — effective. First, people voluntarily avoided contact anyway without being regulated to do so. Some estimates credit voluntary avoidance with 90 per cent of the total effect. Mandates did not regulate everything, of course. In fact, social distancing was largely left to individual compliance. Second, the mandates may have been ill-timed, coming into effect when cases were beginning to fall off anyway. Third, mandates were not needed if public health communication and a sense of collectivism was sufficient to reduce infections.

Free speech vs. safe Internet: We can have both?

Webinar panel video: Where we’ve been and where we’re going – A conversation on Black History Month

Webinar panel video: Where we’ve been and where we’re going - A conversation on Black History Month