The lowered flag is a mockery to all Canadians, including Indigenous people: Melissa Mbarki in the National Post 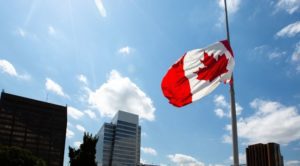 If reconciliation is what this government wants, let’s get to work. Canada should not be using a national symbol to prove their effort, writes Melissa Mbarki in the National Post. Below is an excerpt from the article, which can be read in full here.

It’s time for the flags on Parliament and other federal buildings to be raised. Lowering flags for Remembrance Day will honour our veterans, which would only be an empty gesture if the flags were already at half mast.

The flags were lowered May 30 after 215 unmarked graves were discovered at the former Kamloops Indian Residential School in British Columbia. Shortly after this finding, Cowessess First Nation found 751 unmarked graves in Saskatchewan. Then the federal government pledged $320 million to search all former residential schools for unmarked graves

These searches could take years if not decades to complete. We are now at November 1 with Remembrance Day only 10 days away. What is the protocol with keeping the flags lowered/raised?

I am a proud supporter of our veterans who have made the ultimate sacrifice for our country. In the last couple of years, Veterans Affairs Canada has experienced funding cuts and backlogs resulting in delays to benefits and services. This is completely unacceptable when veterans, like Indigenous people, face high suicide rates.