Let’s lower expectations on North Korea: Shimooka and McDonough in the Toronto Sun 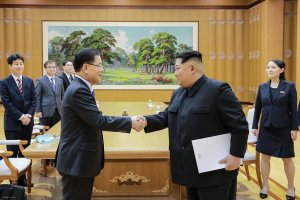 To understand the developments that led to the prospective (and seemingly on-again, off-again) Trump-Kim summit, it’s crucial to look at the domestic situation facing the Democratic People’s Republic of Korea (DPRK).

In 2011, Kim Jong-un’s hold on power was perhaps the most tenuous of his family’s 70-year history. His personal legitimacy was relatively weak: the youngest son of Kim Jong-il, he only became the heir apparent three years earlier. His father’s recent illness also left a power vacuum that was filled by extended family members and senior military personnel. And the state’s economy was in complete shambles after two decades of mismanagement. In short, Kim Jong-un faced a crisis of legitimacy that threatened to collapse his family’s dynasty.

All politics are local, especially for Kim Jong-un. Much of his actions have been about solidifying his position, primarily against domestic threats. He immediately began purging potential threats to his rule, with at least 140 high-level officials executed over the past seven years. The most dramatic removal was the assassination of his half-brother Kim Jong-nam in a brazen daylight attack in Malaysia.

He also set about better managing the populace than his father. Kim Jong-un introduced reforms that have met with some success at improving the moribund economy. Although the state remains under crippling sanctions and is among the most repressive in the world, its citizens have seen some modest material improvement.

Kim’s nuclear and missile programs should be understood through this lens. His grandfather started the North on a nuclear path, and his father tested the DPRK’s first nuclear device. But it was under Kim Jung-un stewardship that North Korea finally achieved a credible nuclear weapon capability, including operational regional and possibly intercontinental ballistic missile delivery systems.

This arsenal not only protects the regime from external attack but also has powerful domestic consequences. A nuclear arsenal was a decades-long national goal; his role in achieving it cements his legitimacy. Furthermore, by accelerating their development while deliberately raising tensions with the US and its allies, Kim was able to create a rally around the flag effect among domestic actors.

A nuclear arsenal was a decades-long national goal; his role in achieving it cements his legitimacy.

The Trump administration has been all too happy to play into this role and inadvertently assisted the regime in other ways. Its “maximum pressure” campaign has done more to alter the behaviour of US allies than the DPRK. The South Korean government of Moon Jae-in, fearing a possible nuclear conflagration, has pushed hard for negotiations with its northern neighbour in order to diffuse tensions.

Other moves by Trump and Moon have given Kim’s regime a series of powerful domestic victories, including a unified Korean Team at the Winter Olympics, several high-profile meetings and summit with South Korea’s leader, a visible reengagement with China, and even the short-lived prospect of a face-to-face meeting with President Trump. All of these events carry enormous symbolism within the DPRK, and further cement his grip on power.

To achieve this breakthrough, Kim had paid almost no cost, except for vague promises to de-nuclearize at some undetermined time and pause its nuclear and ballistic missile testing program. The latter two can easily reversed, assuming the DPRK even requires further testing.

As recent events suggest, the DPRK has every intention to continue extracting concessions at minimal cost. With a nuclear deterrent now in his back pocket, Kim Jong-un can easily maintain this equilibrium and even enhance his position through small incremental victories going forward. These can be achieved by offering small concessions to the outside world, without ratcheting up nuclear tensions — although that could change in the future.

Kim Jong-un has little incentive to make real progress on substantive issues. Total denuclearization would strip away much of the legitimacy and protection that the Kim family has built up, and leave it in a precarious position.

Trump’s decision to cancel the planned summit (even as he now seeks to revive it) offers a good opportunity to lower our expectations here. The US needs to avoid the rhetorical bellicosity and refrain from offering concessions until Kim Jong-un shows real willingness to negotiate. It should also work with allies to stabilize the current state of affairs and aim for the more modest step of suspending the DPRK’s nuclear program and placing effective proliferation controls to prevent the spread of these technologies.

Such measures may lack the ambition of denuclearization. But they provide a way to test North Korea’s intentions, help reduce tensions on the Peninsula, and offer a good foundation for future talks.

Richard Shimooka is a Senior Fellow and David McDonough is Deputy Editor at the Macdonald-Laurier Institute.