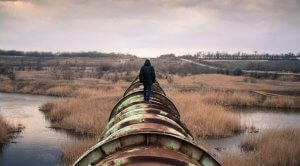 With Keystone looking less and less viable, it is time to seriously look at alternatives that will allow us to meet the world’s growing demand for energy and help lift Canada out of recession – and sustain an economic recovery, writes Jeff Kucharski.

The Keystone XL pipeline – a project that’s been subject to political and legal wrangling for a decade – is looking increasingly like a walking zombie. Despite winning approvals from the Trump administration and investment from TC Energy in March, new hurdles keep emerging, including a Mar. 14 decision by a Montana court to halt the project again. And in May, Joe Biden announced that, if elected president, he would “rip up” the permits.

There is every reason to believe that as president, Mr. Biden would do just that. He doubled down on his comments this week, saying he’s been against Canada’s “tar sands” from the beginning; as vice-president in the Obama administration, he supported blocking the project in 2015. He also needs the backing of the environmental lobby in the Democratic Party, and stopping Keystone will win him that much-needed support. At the moment, Mr. Biden is leading President Donald Trump in national polls.

For Canada, this may actually turn out to be a blessing in disguise: We are now being forced to consider alternatives to becoming even more dependent on oil exports to the United States.

If Keystone is killed, viable options exist to diversify Canada’s export trade while helping strengthen ties with the fastest-growing and most dynamic region of the world: the Indo-Pacific. These alternatives would help Canada’s energy exports reach new markets while removing the constant threat of U.S. political risk to pipeline projects.

Countries in the Indo-Pacific are all but begging for Canadian energy, and supplying this region is the primary goal of the Trans Mountain pipeline under construction. But to replace the capacity lost from the Keystone XL project, Canada would need to build another pipeline or two to get our oil to global markets. That sounds especially daunting given the state of pipeline politics in this country; look no further than the failed Northern Gateway and Energy East projects for proof. However, in a post-COVID world where economic recovery will likely take years, getting fast-track approval for pipelines that create jobs and generate significant tax revenue may find a lot more support among some governments and the broader public.

Alberta Premier Jason Kenney faces a difficult decision. Should he go all-in on Keystone XL and spend more public money and time pursuing lawsuits and trade remedies that are unlikely to succeed? Or should he cut his losses and focus on a strategy that could bring much greater long-term benefits to Alberta and the rest of the country?

The best course would be to work with pipeline companies and Asian investors to finance a pipeline to the West Coast, East Coast or some combination of both. Cancelling Keystone XL would result in the loss of a badly needed 830,000 barrels a day of export capacity, but this could easily be taken up by Asian importers such as Japan, South Korea and other Indo-Pacific countries that are highly dependent on energy imports and would prefer dealing with a low-risk country such as Canada.

Preposterous claims by some politicians that “oil is dead” – as former Green Party leader Elizabeth May declared – belie an ignorance of markets and of transitions. There is no question that Canada and much of the world is in the midst of a transition to a low-carbon future, which should be supported and encouraged. However, such transitions take decades, even with aggressive and effective policy measures. And as we’ve seen during the COVID-19 pandemic – as economic recovery and population health have been prioritized, international institutions come under increasing scrutiny, relations with China get increasingly tense, and global cooperation weakens – the pursuit of aggressive climate change policies may have to take a backs eat to other pressing concerns.

As I outlined in a recent Macdonald-Laurier Institute report, Canada should start looking beyond the U.S. market and adopt a strategic approach to exporting energy resources – one that would advance peace, security and our national interests in the rapidly changing and challenging Indo-Pacific region, while also benefiting the Canadian economy.

With Keystone looking less and less viable, it is time to seriously look at alternatives that will allow us to meet the world’s growing demand for energy and help lift Canada out of recession – and sustain an economic recovery.

Jeff Kucharski is an adjunct professor at Royal Roads University in Victoria. He is the author of the MLI report titled “Canada’s Strategic Energy Resources: Why prioritizing the Indo-Pacific will benefit Canada and our allies.”