John Honderich and Andrew Coyne debate in Ottawa June 6: Should the government act to save journalism in Canada? 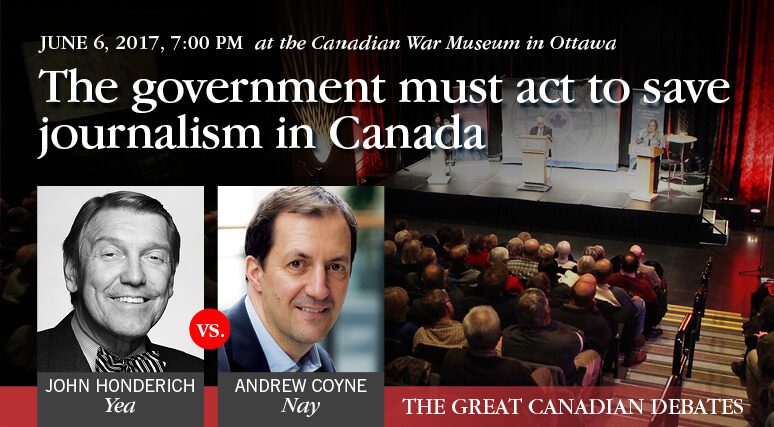 The future of Canadian journalism is up for debate at the Canadian War Museum on June 6, 2017

OTTAWA, May 29, 2017 – Two experienced and well-known journalists – John Honderich and Andrew Coyne – will debate the future of Canadian journalism at the Great Canadian Debates on June 6, 2017.

Honderich, a former publisher of the Toronto Star, will argue in favour of the motion “The government must act to save journalism in Canada“. Coyne, a columnist with Postmedia, will argue against.

The debate will take place at the Canadian War Museum in Ottawa.

Few can dispute that journalism in Canada has been completely disrupted by technological change and market trends. Financial losses by newspapers and broadcasters, and newsroom layoffs are constantly in the headlines. Some would argue that because robust news media are vital to Canadian democracy, and because the future of the Fourth Estate is so clearly in doubt, that government must move to support journalism financially and through other means. Others would argue that much of the misfortune felt by news outlets today is self-inflicted, and government support would be a death blow to an independent press. Who’s right, does the government need to act to save journalism in Canada?

If you are a reporter interested in covering the debate, please contact Mark Brownlee at mark.brownlee@macdonaldlaurier.ca or 613-482-8327 x105.

Andrew Coyne is national affairs columnist for Postmedia News. Raised in Winnipeg, Mr. Coyne is a graduate of the University of Toronto and the London School of Economics‎. He has written previously for Maclean’s magazine, The National Post, and The Globe and Mail.

Fears of a Submarine Arms Race in East Asia Are Overblown – For Now: Ian Bowers for Inside Policy