in Columns, In the Media, Ken Coates, Latest News
Reading Time: 3 mins read
A A 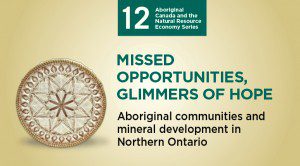 Ontario should move beyond strong-arm efforts to get Indigenous participation in the Ring of Fire. Instead, write Heather Hall and Ken Coates, the Ring of Fire will remain an untapped well of potential without substantial, clear and significant Indigenous engagement.

This op-ed is based on Hall and Coate’s’ MLI paper on development in Northern Ontario.

Premier Kathleen Wynne has jumped into the long-standing debate over the Ring of Fire in Northern Ontario. Last week, she called on northern chiefs to seize the province’s offer to spend $1 billion on crucial road development and to not “squander” the opportunity for economic development in an area desperate for work and social improvements. The Premier’s blunt intervention is a sign of the pent-up frustration among governments, companies and Indigenous communities about the slow progress and endless negotiations surrounding the region’s vast deposits of chromite, nickel and other minerals.

While the Premier may feel frustration, in Northern Ontario there is a widespread feeling in many Indigenous communities that the infrastructure needs of resource firms get more attention from government than the serious community infrastructure deficits that have existed for years. Many Indigenous communities in Northern Ontario, especially in the Far North, have to deal with a variety of deplorable conditions, including over-crowded housing, a lack of clean drinking water, limited or non-existent road access, and a myriad of social, economic and cultural challenges.

The Premier’s blunt intervention is a sign of the pent-up frustration among governments, companies and Indigenous communities about the slow progress and endless negotiations surrounding the region’s vast deposits of chromite, nickel and other minerals.

Within communities, Indigenous people debate the relative merits of development with great intensity and are divided over the balance between jobs, business opportunities and community benefits, and the environmental impacts and social disruptions that accompany mineral development. While governments and the resource sector have made major improvements in recent decades with regards to assessing and mitigating environmental impacts, skepticism remains.

National experience with Indigenous involvement in the resource economy provides reasons for hope – and for caution. Many Indigenous communities have signed mutually beneficial impact and benefit agreements with mining and other resource companies. Several Canadian jurisdictions have encouraged Indigenous participation through a process of sharing government revenues from resource development. Many stakeholders have learned to work together effectively through sound and viable solutions that support cautious and well-monitored development.

But this promising news comes with a caveat. The governments of Ontario and Canada cannot assume that resource development will miraculously bring opportunity and well-being to communities that have been marginalized for generations. At the same time, the mining sector cannot carry the financial burden of addressing long-term socio-economic dislocation.

There are constructive steps that can be taken to improve the relationship between Aboriginal communities, the provincial and federal governments, and the mining industry.

Governments must, therefore, work with Indigenous communities to develop viable and responsible plans for community development in Northern Ontario. Once this community renewal is underway – and both the government of Canada and the government of Ontario are committed to major changes – the foundation for greater economic engagement will be much stronger.

As the broader social, cultural and infrastructure issues are being addressed, there are constructive steps that can be taken to improve the relationship between Aboriginal communities, the provincial and federal governments, and the mining industry.

Second, appropriate infrastructure has to be in place, or in process, to meet the needs of Indigenous communities, and the Ontario government needs to take the lead on this file, which it hasn’t to date.

Third, the Province of Ontario should adopt the approach of a growing number of provinces and develop a strategy on government resource revenue sharing that ensures that a greater percentage of northern wealth stays in the North.

Perhaps most importantly, the Ring of Fire will not proceed, in the end, without substantial, clear and significant Indigenous engagement. There is ample evidence from across Canada – from the Yukon to Labrador and even beginning in some places in Northern Ontario – that Indigenous communities can collaborate effectively and to great mutual benefit with resource companies and governments to produce a viable resource economy.

A greater awareness of what has worked elsewhere in Canada, a focus on both short and long-term benefits to Indigenous communities, and the active cultivation of Indigenous partnerships in resource development are required to unlock the economic potential of the Ring of Fire.

John Honderich and Andrew Coyne debate in Ottawa June 6: Should the government act to save journalism in Canada?