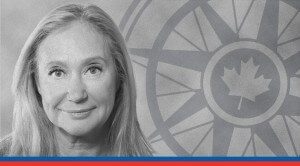 Margaret Wente and Susan Eng squared off over the motion “Canada must stop coddling its spoiled seniors” at the Oct. 25, 2016 edition of the Great Canadian Debates. Here, Wente argues in favour of the motion in an op-ed in the Globe and Mail. Eng argued the opposite side in a different op-ed.

If you’ve got to grow old (and you have to admit it sure beats the alternative), there’s no better place to live than Canada today. We seniors have never had it so good. We’re the wealthiest generation in history. We’re vastly healthier and longer-lived than our great-grandparents. And please don’t call me a “senior,” because I’ll swat you with my yoga mat.

Canada has done exceptionally well by its seniors. In the 1970s, nearly 40 per cent of Canadians over 65 lived in poverty. Today, depending on how you measure, it’s around 7 per cent. More children live in poverty than seniors do. According to the Conference Board of Canada, our seniors are among the most well-off in the world. Not everyone is doing well, of course, and there are big gaps in seniors’ health care. But the transformation in the circumstances of the elderly is one of the greatest triumphs of the welfare state. Let’s face facts: most of us don’t need subsidized bus tickets any more.

Young adults today aren’t going to get the same breaks we got. They know we’re the Lucky Generation. We got good pensions and benefits. Our houses turned into gold mines. We enjoyed investment returns and, yes, a standard of living that many of our kids can only dream of.

Please don’t call me a “senior,” because I’ll swat you with my yoga mat.

Our biggest challenge has changed. Now that we’ve ensured our own security, we need to ensure that the system is sustainable for future generations. The triple threat of an aging population, longer lifespans and lower fertility creates a demographic challenge the likes of which we’ve never faced. Simply put, today’s level of entitlements threatens to suck the lifeblood from future generations. That’s nobody’s fault. It’s just reality. It’s just not fair to get them to pay for our cheap bus tickets any more.

We need to do two things. First, we need to update our notions of “old age” to better fit today’s realities. Second, we need to target our support to those who need it most.

The idea that 65 is the threshold of old age is obsolete. When old-age pensions were invented, most people didn’t even live that long. Today, a lot of us will spend more years in retirement than we did at work. The idea that there is some arbitrary cutoff for productive lives is a stupendous waste of human potential. We need to change our focus from retirement to unretirement– so that people can keep on contributing in some fashion well into their late 60s and even beyond.

Now that we’ve ensured our own security, we need to ensure that the system is sustainable for future generations.

We could also save billions every year simply by introducing some minor and gradual changes to old-age entitlements. Take Old Age Security. The last government passed a law to change the eligibility age for OAS from 65 to 67. It wouldn’t have taken full effect for many years. We could have saved $11-billion a year. But the seniors’ lobby wouldn’t hear of it, so the current government rolled back the change. Nobody wants to pick a fight with angry seniors.

Not everybody needs OAS–and nobody paid into it in advance. Yet we pay OAS to people who make mover $100,000 a year. That’s just dumb. We’ve got to target more of our seniors benefits so that the money goes to people who really need it. People who drive around in fancy cars don’t need free drugs. They don’t need the younger generation to pay for every last cent of their health care.

A few strategic changes today will help us sustain the system for tomorrow. Some day our grandchildren will be seniors, too. We want to make sure there’s something left for them.

Margaret Wente is a columnist with the Globe and Mail.

Ottawa is right to hold the line on health funding: Brian Lee Crowley and Sean Speer for Inside Policy