Inside Policy, June 2017: Canada 150 a time to celebrate our founders 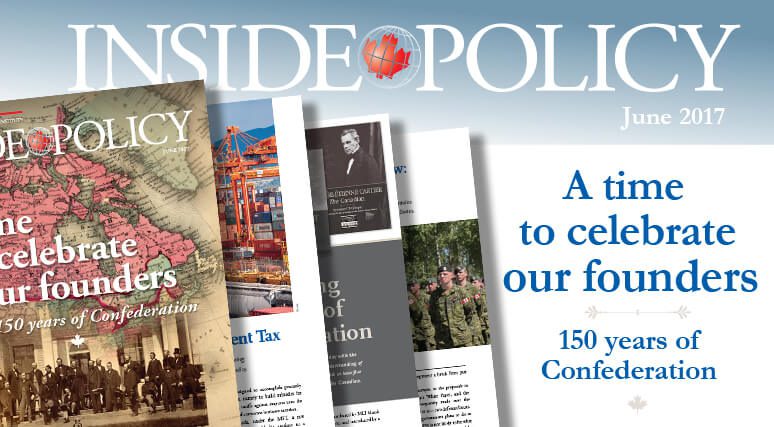 OTTAWA, June 26, 2017 – The latest edition of Inside Policy will give readers a new appreciation of Canada’s founding.

The June 2017 issue of the Macdonald-Laurier Institute’s flagship magazine marks the 150th anniversary of Confederation with a deep dive into MLI’s Confederation Series, plus a variety of articles on how we should appreciate our country on this sesquicentennial celebration. The series of papers authored by MLI Munk Senior Fellow Alastair Gillespie, which MLI launched earlier this year, looks at what it means to be Canadian through the eyes of Canada’s Fathers of Confederation. Some of Canada’s most respected political figures have contributed their views, with Paul Martin writing about Alexander Galt, Preston Manning on George Brown, and Jean Charest and Antionne Dionne-Charest on George-Étienne Cartier.

In their piece, MLI Managing Director Brian Lee Crowley and Gillespie look at some of the major findings to emerge from the Confederation Series.

“In a world where resurgent nationalism is causing other countries to turn inward, the Canadian model appears increasingly significant”, write Crowley and Gillespie.

The June 2017 edition of Inside Policy also features articles by: Heather Hall and Ken Coates on the resource potential in Northern Ontario; Patrice Dutil on reforming Canada’s democratic institutions; Stanley Hartt on American plans for a Border Adjustment Tax; David McDonough on China’s great power ambitions; Brian Lee Crowley on the value of a Japan-India axis as a counter to China; plus much more!

Why a carbon tax will fail: Philip Cross in the Financial Post

Why a carbon tax will fail: Philip Cross in the Financial Post