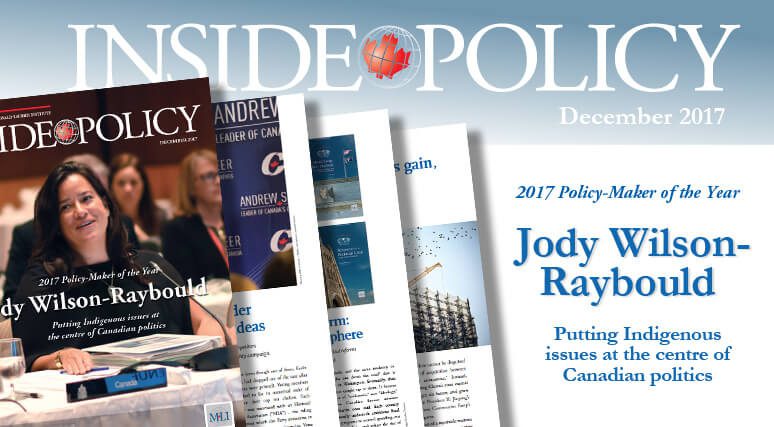 OTTAWA, ON (Dec. 18, 2017): The Macdonald-Laurier Institute is pleased to name Minister Wilson-Raybould as the “Policy-Maker of the Year” in this issue of Inside Policy.

Canada’s Justice Minister and Attorney General Jody Wilson-Raybould has a mandate from Prime Minister Justin Trudeau that covers a particularly wide and important range of issues – from marijuana legalization to Indigenous reconciliation to justice reform. She is one of the busiest, most active members of Cabinet.

Kate Heartfield points out in the cover story, “If Justin Trudeau’s Liberals want to make a lasting impact on Canadian society, the justice file is key.”

Notably, Minister Wilson-Raybould is the first Indigenous person to hold that position. As Ken Coates notes she is, “the most influential Indigenous federal politician in Canadian history. She has shifted, with the full support of the Prime Minister and his cabinet, Indigenous affairs from the margins to the centre of Canadian politics.”

The December 2017 edition of Inside Policy also features articles by: Ken Coates and Bram Noble on regional assessments for resource projects; Philip Cross on tax avoidance; Sean Speer on the state of Canada’s public finance, and on what the US should do to alleviate its debt problem; Paul Martin on his personal experience combating Canada’s debt; and Duanjie Chen on the possible Chinese purchase of Aecon.

Canada should join America in recognizing Jerusalem: Shuvaloy Majumdar in the Toronto Sun