How Indigenous peoples can save the resource economy in Canada: Buffalo and Coates in the Hill Times 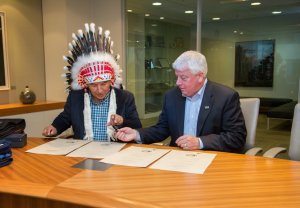 With full Indigenous partnership for the first time in Canadian history, the country can have a robust, successful natural resource economy, write Stephen Buffalo and Ken Coates.

In one of the most unexpected developments in recent years, numerous First Nations have recently come out in favour of both the construction of the Kinder Morgan Trans Mountain Pipeline and, more surprisingly to most Canadians, have indicated a desire to buy all or part of the now-nationalized project.  For people in the field, this is not surprising.  Instead, it is the logical extension of a steady expansion in the role of Indigenous peoples in the oil and gas industry in Canada.

For generations, resource development occurred on the backs of Indigenous peoples. Outside developers moved into Indigenous territories and produced a great deal of wealth from mines, oil and gas fields, forests and hydro projects. Indigenous communities, if they gained any benefits at all, got scraps off the table. But they absorbed repeated body-blows, such as despoiled lands, the destruction of harvesting activities, and the impoverishment of entire societies. The small financial returns from paternalistic governments were sparse compensation for profound losses.

This is all changing fast. Only 50 years ago, Canadians refused to recognize Indigenous rights. But at great cost to their communities, Indigenous peoples fought back, spending decades using the courts to get governments in Canada to recognize the contemporary authority of Aboriginal and treaty rights. It has been a hard slog, marked by literally hundreds of legal victories offsetting a small number of losses in court.

Canadians know very little about Indigenous successes in recent years. Few urban people have much contact with Indigenous communities. But the growth has been dramatic. There have been thousands of Indigenous businesses created. Their communities have signed hundreds upon hundreds of agreements with resource and infrastructure firms. Thousands of Indigenous workers, many with college diplomas or university degrees, are working in the sector across the country. Indigenous economic development corporations have invested hundreds of millions of dollars in everything from oil sands tanker farms to airlines, hotels, resource-bearing properties, and other business assets.

But the rest of the Canadian economy has made little effort to reach out to Indigenous peoples. Save for the double-edged sword of dependency on government transfer payments, Indigenous peoples in most of Canada understand that there are precious few economic opportunities for them outside the natural resource sector.

Indigenous peoples are not impediments to the growth of the resource economy; they are a key part of the future of Canadian extraction, processing and transportation of natural resources. Indigenous communities seek economic opportunity, including a fair share of Canadian prosperity and a release from the weight of history and the grinding poverty and hopelessness that accounts for most of their social and cultural problems.

Many Canadians refuse to see the complexity of the current resource economy. Take the Kinder Morgan Trans Mountain Pipeline controversy. The First Nations on the West Coast have for strong local reasons fought against the pipeline or, more accurately, against coastal shipping and the incremental use of fossil fuels. But consider the work of the 130 oil and gas producing First Nations that are members of the Indian Resource Council, or the dozens of Indigenous communities that have made partnership agreements with Kinder Morgan and, earlier, Enbridge’s Northern Gateway pipeline.

Many Canadians refuse to see the complexity of the current resource economy.

Consider, too, the commitment of the Inuit of Nunavut to engage in the natural resource economy and infrastructure development. And the work of Indigenous groups in the infrastructure and support industries. To many Canadians, finding communities that have been outspoken critics of the oil and gas sector coming to the defense of the industry is something of a shock. For close observers of Indigenous participation in the resource sector, however, the recent suggestions by some Indigenous communities that they are open to purchasing part ownership in the Trans Mountain Pipeline is a logical extension of their engagement.  That several of the First Nations that have stepped forward have been vocal critics of the oil sands demonstrates that these positions are based on thoughtful and careful analyses of the best interests of their communities.

Make no mistake. Indigenous peoples are not puppets in the control of resource firms. They bargain hard to create opportunities for their communities. They do not follow standard business conventions and investment patterns; they look for long-term returns, local economic development and business spin-off opportunities. In the future, many major infrastructure projects will not just be built through Indigenous territories but will be owned, all or in part, by Indigenous communities or consortia. Indigenous communities will be actively involved in everything from exploration and development to environmental oversight, response and remediation.

Indigenous peoples will not abandon their concern about the environment. They are deeply connected to their traditional territories and want to protect their lands for future generations. Projects will only proceed after robust and difficult internal debates. But Indigenous peoples understand the need for a balance, looking for the right economic opportunities that will give them the resources to support autonomy and independence.

Indigenous peoples are back economically. They know their economic future is tied to the success and sustainability of the Canadian natural resource sector. Without a full and enthusiastic embrace of Indigenous communities – without ensuring that Indigenous peoples have a proper share in the returns and an appropriate measure of influence over the sector – the resource sector will continue on its current uncertain course. With full Indigenous partnership for the first time in Canadian history, the country can have a robust, successful natural resource economy.

Stephen Buffalo is CEO of the Indian Resource Council. Ken Coates is a Munk Senior Fellow at the Macdonald-Laurier Institute and a Canada Research Chair at the Johnson-Shoyama Graduate School of Public Policy at the University of Saskatchewan.