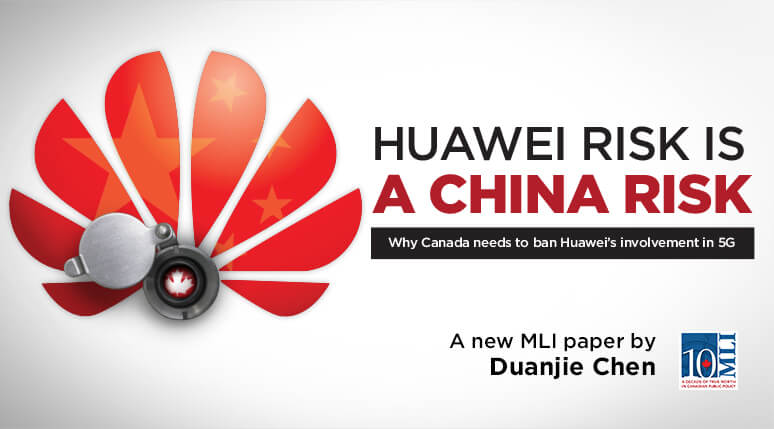 Proponents of Huawei insist the Chinese tech giant is a purely commercial entity. However, as detailed by Munk Senior Fellow Duanjie Chen in our latest MLI report, titled Huawei Risk is a China Risk: Why Canada Needs to Ban Huawei’s Involvement in 5G, this view glosses over Huawei’s intimate relationship with the Chinese Communist Party (CCP), its inexplicably rapid growth, and its global track record of predatory behaviour.

According to Chen, 5G will be the backbone of Canada’s critical infrastructure, making it imperative for the federal government to ban Huawei’s involvement in our next-generation network.

Much of Huawei’s success is owed to the CCP’s direct involvement. “Huawei boasts a star status in both benefitting from and contributing to China’s national strategy, which is aimed at dominating the global market,” explains Chen.

Chen goes on to outline key policy decisions made by the Chinese government to bolster Huawei’s rapid growth. For instance, Huawei received financial support amounting to some US$75 billion in grants, credit facilities, tax breaks and subsidized land purchases. Huawei also extensively benefitted from the CCP government’s blocking of foreign entries to the Chinese market, use of diplomacy to enable Huawei’s penetration of foreign markets, and orchestratedtheft of foreign commercial secrets.

Notably, Huawei underspent its rivals on R&D in absolute value until 2013. But the company’s pre-2015 acquisition of patents has topped its 5G rivals persistently with a ratio of three-to-one or higher. For example, Huawei’s cost per patent family for 2003-2012 was about US$621,360 compared to rival Nokia’s US$8.5 million.

As Canada grapples with this issue, Chen points to other nations as examples. Australia was the first to notify its partners about the dangers of using high-risk vendors such as Huawei and banned Huawei’s 5G involvement decisively. Australian experts warned that the entire infrastructure will be vulnerable if connected to a compromised 5G network. The US’s decision to ban Huawei from 5G has received bipartisan consensus. US House Speaker Nancy Pelosi  even likened Huawei’s 5G involvement to “choosing autocracy over democracy on the information highway.”

Canadian policy-makers need to have the resolve to ban Huawei from our 5G network to ensure our national security and defend our Canadian way of life. Canada should also prepare for Beijing’s possible retaliation. But given the alternative – providing the CCP government with one more means of leverage in the future if Canada find ourselves once again in disagreement with China’s authoritarian leaders – that is a price worth paying.

To learn more about Huawei and why Canada should ban Huawei’s involvement, read the full report here.

The Macdonald-Laurier Institute has recently launched “The Eavesdropping Dragon: Why Huawei Has No Place in Canadians’ Communication,” a project page dedicated to all of MLI’s work around the upcoming Huawei decision. For more information, you can find the full project page here.

Asleep at the Switch in a Time of COVID-19 Crisis: Shawn Whatley in the Epoch Times