Bending the current trajectory of runaway coups towards law-and-order means holding all perpetrators of recent coups accountable and making sure that they do not win political concessions, writes Yonas Biru. 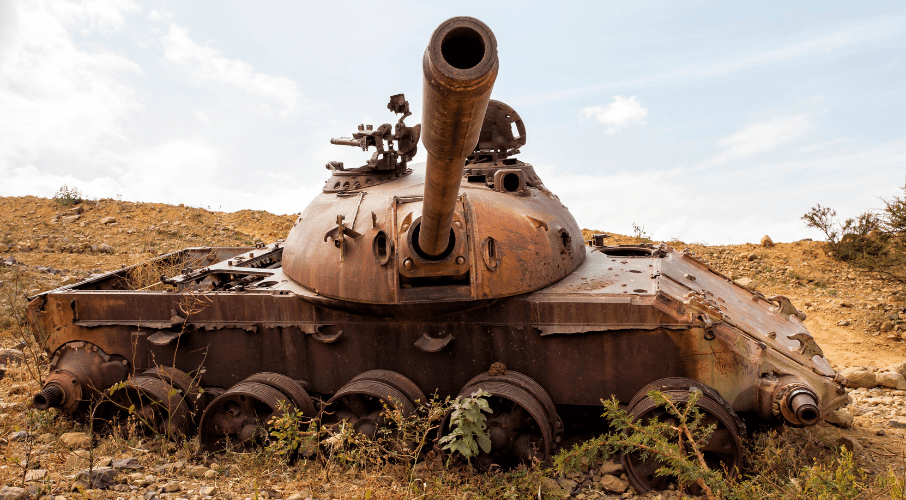 On October 26, 2021, the UN Secretary General António Guterres sounded an alarm, decrying “an epidemic of coup d’états” unfolding in Africa. A week later, the Wall Street Journal heralded an article titled “Military Coups in Africa at Highest Level Since the End of Colonialism.” It behooves us to ask: what triggered the epidemic? The answer resides in the way the US, the European Union (EU), and the African Union (AU) handled Ethiopia’s failed coup attempt and Chad’s successful coup.

The conflict at issue in Ethiopia is the war between the Tigray People’s Liberation Front (TPLF) and the federal government of Ethiopia, which was triggered by a failed coup attempt. On November 3, 2020, Tigrayan militias invaded the Northern Command of the Ethiopian National Defense Force (ENDF) stationed in Tigray. The invasion was facilitated by a large garrison of Tigrayans in the ENDF who attacked the Northern Command from within the state apparatus.

A TPLF official, Sekoture Getachew, described the attack as a “lightning strike” that lasted no more than 45 minutes. He added: “We brought the entire northern command consisting of 30,000 soldiers and 70 to 80 percent of the nation’s military firepower under our control, barring a few pockets of resistance.” TPLF unilaterally declared Prime Minister Abiy Ahmed’s government “illegitimate” and demanded the establishment of a provisional government.

A widely accepted definition of a coup d’état is “illegal and overt attempts by the military or other elites within the state apparatus to unseat the sitting executive.” TPLF’s political calculus was simple. Overwhelm the government with a lightning strike and take over the levers of power. Should that fail, hunker in Tigray with 70 to 80 percent of the nation’s military weaponry and threaten a civil war to win political concessions.

Unfortunately, after the Biden administration came to power in January 2021, the narrative changed from a bloody coup attempt that dragged the nation into a civil war to a political disagreement. Subsequently, the EU adopted the US’s narrative hook, line, and sinker. Part of this had to do with their assessment that in being in control of 70 to 80 percent of the nation’s military firepower, TPLF must be accommodated to avoid a civil war. The US and EU pressured Prime Minister Abiy Ahmed to meet TPLF’s demands, including cancelling scheduled national elections and forming a transitional governmental council that would replace the Prime Minister’s government.

The situation in Chad was different. President Idriss Déby, who was praised by the West as a linchpin in the fight against Islamist extremism, was killed on the battlefield fighting Islamist rebels. Soon after, the military establishment inaugurated his son as an interim president to lead a transitional military council. The Council suspended the constitution and dissolved the parliament in clear violation of the nation’s Constitution.

At President Déby’s funeral, French President Emmanuel Macron sat next to the newly installed interim president and gave his support to the military council as an important step for “stability, inclusion, dialogue and democratic transition.” The AU, which has an unequivocal policy against coups, exempted the military council from facing the consequences of their unconstitutional actions.

Interventions by the US, EU, and AU in these conflicts distorted the political incentives and constraints facing these African countries. Their interventions that were justified in the interest of avoiding civil wars not only flagrantly violated Ethiopia and Chad’s constitutions, but they also undermined the AU’s policy of “zero tolerance” for “coups, armed dissident and rebel movements.” As proclaimed in the Lomé Declaration in July 2000, the zero tolerance policy applies diplomatic and trade sanctions against perpetrators of coups and armed dissent.

These exceptions for Ethiopia and Chad’s situations, in violation of the Lomé Declaration, planted the seeds and watered the soil for coups. To fully understand the damage to Africa’s stability, we need to take a closer look at the coups that took place in Africa from 1960 to 2022, paying particular attention to two inflection points in 2000 and 2021.

Military coups have been a common feature of the African political landscape since decolonization in 1960. Between 1960 and 1999, four successful or attempted coups took place each year on average. The year 2000 was a watershed moment, owing to the AU’s Lomé Declaration. Between 2000 and 2009, the number of coups declined to 2.2 per year, and further dropped to 1.6 between 2010 and 2020.

In 2021, following the US, EU and AU interventions in Ethiopia and Chad, the downward trajectory of coups got reversed. In less than 14 months, Africa recorded eight successful and attempted coups, amounting to 6.8 per year, a rate drastically higher than the corresponding figure before the Lomé Declaration.

Understanding the macro (political and economic) and micro drivers of coups can help us understand the 2000 and 2021 inflection points.

Yet a closer examination of Africa’s coups shows that neither conditions explain the 2000 or 2021 inflection points. For example, between 1960 and 1979 the average number of coups per year was around 4, with average GDP growth rate of around 4.25 percent. By comparison, the number of coups during 1980-1999 was about the same (3.9 per year), but the corresponding GDP growth rates was around 1.7 percent. This shows the significantly lower economic growth rates from 1980 to 1999 did not trigger significantly more coups than in the previous two decades.

The Mengistu Hailemariam (Ethiopia), Idi Amin (Uganda), and Jean-Bédel Bokassa (Central African Republic) regimes also shed light here. They were the three most brutal regimes who pushed their impoverished nations to the brink of implosion and, according to the public good theory, they would have been the first targets of coups. But the three dictators were effectively coup-proof, being ousted for a variety of other factors: Hailemariam by a protracted armed insurrection, Amin by Tanzania’s military, and Bokassa by French paratroopers.

In contrast, micro factors seem to offer a better explanation of the 2000 and 2021 inflection points. These factors relate to the cost-benefit calculus of perpetrators undertaking a coup in the first place. Three fundamental elements govern this calculus.

First is the likelihood not only of conducting a successful coup but also of retaining the levers of power in the aftermath. Second is the benefit of taking the highest political office. TPLF leaders understand this well. In their 27 years reign, they were able to illicitly transfer $30 billion to offshore banks. Third is the cost of conducting a coup, which often involve imprisonment and/or execution.  For instance, Hailemariam, Amin and Bokassa created a firewall against coup by making the cost of attempting coups prohibitively high in their brutal regimes.

Any rational coup maker or an armed dissent leader will not attempt a coup unless they are convinced of a better than 50 percent chance of success in taking and maintaining the levers of power. They must also be convinced that the potential reward of a successful power grab attempt is higher than the cost of a failed one.

By undermining the Lomé Declaration, the US, EU, and AU have distorted the cost-benefit calculus of coups in favour of perpetrators of coups and armed dissenters. Much of this is manifested through the increase in the likelihood of perpetrators retaining power after a successful coup and the distortion of the cost-benefit calculus in terms of mitigating the costs of unconstitutional power grab.

The frequency of coups signifies the absence of democratic norms and values, fragile political governance architecture, underdeveloped internal security infrastructure, and politicized and often undisciplined military culture. Under these circumstances, regional and international constraints serve as effective bulwarks against coups and armed dissents, as the Lomé Declaration has proven.

In 2021, the US, EU and AU undermined the international bulwark and tilted the balance in the risk calculation in favor of perpetrators of coups and armed dissenters. This opened the proverbial floodgate for coups. The myopic exemption accorded to perpetrators of Chad’s successful coup and Ethiopia’s unsuccessful coup will cause more harm than good. It is important to remember that since 1960, African nations have gone through 200 plus successful and failed coups and there is nothing good to show for it in terms of socio-economic development or stability.

Unless corrected with a sense of urgency and resolve, the potential consequences of the breach of the Lomé Declaration will be enormous. Bending the current trajectory of runaway coups towards law-and-order means holding all perpetrators of recent coups accountable and making sure that they do not win political concessions. The correction must start from Ethiopia and Chad. Anything less will make the Lomé Declaration a dead text and sustain the current upward trajectory of coups.

Yonas Biru worked for the World Bank for nearly two decades. In the last seven years of his tenure, he served as the Deputy Global Manager of the International Comparison Program (ICP). He has served as the interim chair of Prime Minister Abiy Ahmed’s Independent Economic Advisory Council and chair of the Nile Club that advised the Ethiopian Ministry of Foreign Affairs.