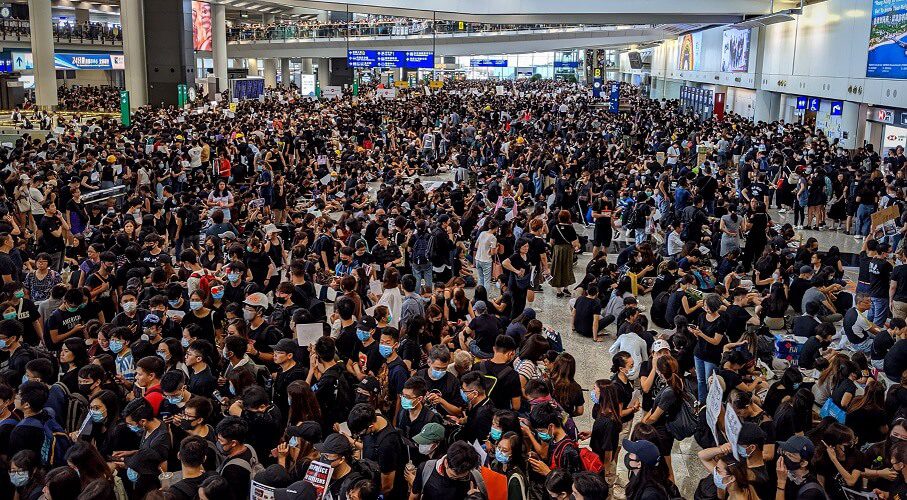 Liberal democratic societies are simply incompatible with the increasingly authoritarian mindset that animates the Chinese Communist Party. J. Michael Cole writes that the notion that their inhabitants — global, connected and proud of their liberties — would willingly cede their freedoms to Beijing is naive at best.

I will always remember the chilling sound of the riot police’s rubber truncheons viciously hitting the young flesh and bones of the peaceful protesters. Hundreds of protesters were on their knees, their hands extended into the charged evening air in a peaceful gesture. Across from, row upon row of helmeted riot squads, armed with plexiglass shields, batons, and the usual accoutrement of the nasty business, had been given the order to crack down.

A few hundred meters behind us, hundreds of protesters had earlier broken into the Executive Yuan, the government’s nerve center. That same evening, the “rioters,” as the government came to call them, would be bloodied in a brutal expulsion by police. A week later, hundreds of pro-Chinese Communist Party (CCP) gangsters would take to the streets in an attempt to physically assault the young protesters.

Those all-too-familiar scenes did not take place in troubled Hong Kong in recent weeks. Rather, they occurred in downtown Taipei, Taiwan, at the height of the Sunflower Movement’s occupation of the Legislative Yuan, Taiwan’s parliament, in March and April 2014.

What triggered the unprecedented mobilization by civil society and the attendant political crisis wasn’t an Extradition Bill that threatened to spirit crime suspects into the Orwellian justice system to the Mainland, or even the stubbornly dysfunctional “one country, two systems” and the co-opted, unaccountable elite that straddles the former British colony. The protests were instead sparked off by a much less existential, and yet controversial Cross-Strait Services Trade Agreement (CSSTA) that, critics said, had been negotiated with Beijing with insufficient transparency and which threatened to expose various sectors of Taiwan’s economy to Chinese rapacity. At one point, more than half a million people took part in the three-weeks-long protests, while hundreds of thousands of others supported the movement by sharing posts on social media.

What these peaceful uprisings have in common is the China factor and its corrosive effects on what Beijing regards as its peripheries. At their heart, these crises stemmed from the CCP’s inability to conjugate with the complexities of liberalism and democracy. The result was dislocation, instability and chaos, the inevitable offshoot of Beijing’s preference for unaccountable deals with a small elite at the top.

The “one country, two systems” formula applied to the former British colony after 1997 is failing, largely because from the outset the CCP never fully committed to “two systems.”

The Hong Kong authorities’ stubborn response to the protests, and the inherently zero-sum posture of the central government in Beijing, are a clear indication that the “one country, two systems” formula applied to the former British colony after 1997 is failing, largely because from the outset the CCP never fully committed to “two systems.” The slow erosion of freedoms, and the gradual dilution of the idiosyncratic culture in the territory of 7.4 million souls since Handover — both by-products of Beijing’s tone-deaf Han chauvinism — account for the troubles today. Society’s decision to escalate, to take extraordinary risks with little prospect of a favorable outcome, are a signal that the status quo has become untenable.

One can only imagine the type of resistance that would emerge should Taiwan, a country of 23 million people which has been a democracy — something that Hong Kong never was — since the 1990s, find itself in a similar situation. Like Hong Kong, Beijing is adamant that the “one country, two systems” is a suitable — the only, in fact — mechanism for “peaceful reunification,” which from the Taiwanese perspective is more akin to annexation. Even before the mess in Hong Kong, Taiwan’s politicians had made it clear that “one country, two systems” is unacceptable to the Taiwanese. And yet, there are forces afoot today that are calling for a peace accord with Beijing and who, should they come to power after the January 2020 elections, would likely seek to deepen ties with Beijing through various deals that are bound to undermine Taiwan’s sovereignty — the same behavior that gave rise to the Sunflower Movement in 2014. In this new context, any government in Taiwan that sought closer ties with Beijing under the traditional modus operandi of unaccountability and elite capture would spark a response by civil society that would make the Sunflower Movement, or the current movement in Hong Kong, seem like a walk in the park.

Barring capitulation by Hong Kong society, and assuming that the CCP will not give in to their demands, as doing so would constitute an unpalatable loss of face to CCP General Secretary Xi Jinping, the only conceivable scenario is a massive crackdown on Hong Kong, something much worse than we have seen to date. Police (and triads) have already struggled to bring some semblance of stability to the 1,104-square-kilometer (426 square mile) territory, and now it is reported that 500 “volunteers” from far-away Fujian, along with members of the 14K crime syndicate, may be asked to descend on Hong Kong at the weekend to teach the unruly “mobs” a lesson. And it is possible that the People’s Liberation Army — or the People’s Armed Police — could eventually be called upon to intervene, a nightmarish scenario with disastrous consequences for Hong Kongers.

It goes without saying that imposing order on Taiwan, a territory spanning 35,808 square kilometers (13,862 square miles) with a long tradition of independence and a population that is deeply attached to democracy — arguably the closest to American-style democracy in all of the Indo Pacific — would be a much more difficult endeavor for the CCP and its proxies, by orders of magnitude.

Liberal democratic societies are simply incompatible with the increasingly authoritarian mindset that animates the CCP. The notion that their inhabitants — global, connected and proud of their liberties — would willingly cede their freedoms to Beijing is naive at best. Such illusions are being shattered in Hong Kong as we speak, and the idea that the Taiwanese would be any less committed to preserving their hard-earned democracy is preposterous. It says a lot about the CCP’s appeal that the only way it can quiet down discontent on its peripheries is through pacification.

J. Michael Cole is a Taipei-based senior fellow at the Macdonald-Laurier Institute, senior fellow with the Global Taiwan Institute in Washington, DC, and deputy coordinator of the Prague-based International Committee for Democratic Renewal/Forum 2000 – China Working Group.

It’s time to bring troubled Japan-South Korea relations back from the brink: J. Berkshire Miller in the Globe and Mail

Canada’s Approach to Indigenous Issues – Now for Something Truly Radical: John Paul and Ken Coates in the Epoch Times

Canada’s Approach to Indigenous Issues - Now for Something Truly Radical: John Paul and Ken Coates in the Epoch Times