What happened in Tibet could happen to you: Lobsang Sangay for Inside Policy

in Columns, Dragon at the Door, Foreign Affairs, Foreign Policy Program, In the Media, Inside Policy, Latest News
Reading Time: 5 mins read
A A 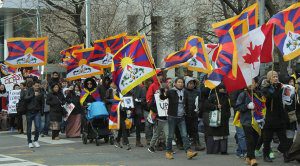 The Chinese government ought to respect human rights and liberal values of the Tibetan people and the Uyghurs, Hong Kong, and the people in Taiwan, writes Lobsang Sangay. This article is based on his testimony at the House of Commons Special Committee on Canada-China Relations on August 6, 2020.

Thank you very much, Honourable Chair Geoff Regan and vice-chairs and the members of the committee. Here in Dharamsala it is 1 a.m. Given the importance of the committee, I thought I should deprive myself of sleep and talk about China and Tibet.

It’s odd now that, because of COVID-19, which originated in Wuhan, instead of meeting in person we have to conduct such a hearing through online. It’s an inconvenience, of course, to all of us, I think partly due to the Chinese government’s irresponsible act of not letting us know that the coronavirus does transfer from human to human. Several thousands were infected, but they did not inform the world. That led us to this very precarious situation.

I just want to say what I said in 2018, which is similar to what US government and others have been saying: the challenge caused by the Communist Party of China, or the Chinese government, is very serious. Either we transform China or China will transform us. Liberal values are at stake. Democracy is at stake. Human rights are at stake. Environmental issues are at stake.

Being the second-largest donor to the United Nations, China is trying to restructure the United Nations by putting key personnel who support them and who compromise democratic values and human rights values. They are trying to redefine human rights. They have already passed two resolutions redefining human rights. If that is to continue, then the human rights that we know, where freedom of speech and political rights are considered key, will be diluted. Then we will see all over the world what happened in Tibet in 1950s – elite co-optation, influencing politicians, influencing business people, intellectuals, the media.

All these things are taking place. Having travelled from Ottawa to Norway to Sweden to Australia, I’ve seen this over and over again. Because of this elite co-optation, the Chinese government tried to get many people in your own countries favouring or supporting the Chinese version of events. This is what they are trying to do.

On the issue of Taiwan as a member of the World Health Organization (WHO), I have been in favour of Taiwan’s status be restored to pre-2016, when they were a member of the WHO. The coronavirus is a global health issue, and Taiwan has performed brilliantly in dealing with coronavirus. Their expertise and their experience could be invaluable in handling this coronavirus. Their role should be provided for, accommodated at the WHO, but because with Chinese government pressure they are not allowed in.

Hence, what we have been saying is that what happened with Tibet could happen to you. From Taiwan to Hong Kong to East Turkestan, with a million or so people detained, including a Canadian citizen, a Uyghur Canadian, Huseyin Celil, who has been detained in China, all this clearly shows that what happened in Tibet 60 years ago is happening all over the world. There are a lot of lessons you can learn from Tibet.

With this, I want to recommend that the Canadian government, especially the committee, pass a motion and support a middle-way approach as a policy which seeks genuine autonomy for the Tibetan people within the framework of the Chinese constitution. For that to happen, there ought to be a dialogue between the envoys of the Dalai Lama and the representatives of the Chinese government. This is, in fact, a win-win proposition for the Chinese government and the Tibetan people. I hope the committee will consider supporting middle-way approach.

Religious freedom is vital. This year marks the 30th birthday of Panchen Lama and 25th anniversary of his disappearance. We don’t know where he is. He has disappeared for 25 years, and Panchen Lama’s case reflects the tragedy of situation of religious leaders and religious freedom in Tibet. The Chinese government is trying to interfere in the selection of reincarnated Lamas. The reincarnation is strictly a spiritual business that the Communist Party of China is politicizing. They are saying they will interfere and they will select the reincarnated Lama, and the Tibetan people should follow those religious leaders. This is in clear violation of basic human rights and basic spiritual tradition.

Also, I would urge the Canadian government to join alliances of democracies or like-minded countries that support and uphold liberal values, to be together, so open coordination with other countries to press on the Chinese government that they ought to be a responsible member of the international community, and that international laws and regulations ought to be followed. If they don’t do it, they will not get the respect that they want as an upcoming superpower.

The Chinese government ought to respect human rights and liberal values of the Tibetan people and the Uyghurs, Hong Kong, and the people in Taiwan as well.

And finally, Tibet is very important from an environmental point of view. Ten major rivers of Asia flow from Tibet. Tibet is called the “water tower of Asia.” More than a billion people depend on water flowing from Tibet. Climate changes all over the world, including whether the winter will be cold or warm in Ottawa, or the summer will be too hot or not. It’s partly dependent on jet streams from the Tibetan Plateau, so that is also a very important matter. The Chinese government does talk about providing leadership in climate change, but their actions and their record in Tibet are abysmal. The Chinese government should be held accountable as far as environmental destruction of the Tibetan Plateau is concerned.

Some of the points were also raised by a Tibetan Canadian called Sangyal Kyab, who walked all the way from Toronto to Ottawa and visited the Parliament, asking parliamentarians to support dialogue between Chinese government and envoys with Dalai Lama to find a peaceful solution to the Tibet issue, and the whereabouts of Panchen Lama, and religious freedom.

I would like to end here because my time is up, and thank the committee members for inviting me. So given the importance, even though it’s past midnight, it’s past 1 a.m. here, I’m here to represent Tibetan people and to emphasize how important Tibet issue is. With that, I want to thank the chair, the clerk, and all the members of the committee.

Lobsang Sangay is the President of the Tibetan Parliament in Exile.