Great Canadian Debates: Ken Coates and Lloyd Axworthy on the value of a university degree

OTTAWA, April 27, 2015 – Are University degrees becoming devalued? Are our institutions still serving the needs of students preparing to enter a changing economy as well-rounded individuals?

Two of Canada’s leading thinkers on post-secondary education will square off over the future of Canadian universities in the Macdonald-Laurier Institute’s second Great Canadian Debate of 2015.

On April 29, Ken Coates and Lloyd Axworthy will debate the resolution: “Too many Canadian kids are going to university”.

Ken Coates, a Macdonald-Laurier Institute Senior Fellow, will argue in favour of the resolution. Axworthy, a former President of the University of Winnipeg and former Canadian Foreign Minister, will argue against.
The event will be moderated by Peter Milliken, former speaker of the House of Commons.

This is the second debate in the 2015 series. 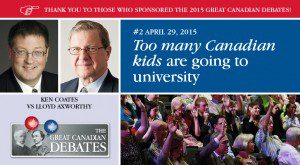 On March 31, Frank Buckley and Chrystia Freeland debated income inequality. On May 26, Andrew Coyne and John Pepall will debate whether Canada’s democracy is in crisis.

For more information on this debate and others, click here.