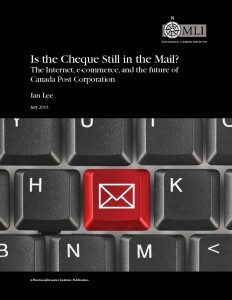 The Macdonald-Laurier Institute is highlighting its authors’ work on some of the major public policy issues going into this year’s federal election campaign. Today, Ian Lee examines how to reform Canada Post

Both the Liberals and the NDP have promised to reinstate door-to-door delivery service, placing the debate about Canada Post in the centre of the upcoming federal election campaign.

To arrange an interview with Ian Lee, please contact Mark Brownlee, communications manager, at 613-482-8327 x105 or email at mark.brownlee@macdonaldlaurier.ca.

While it will be up to the parties to argue over what to do about Canada Post, one thing is clear: Canada Post will need to make major changes if it doesn’t want to be a big drain on government revenues. The reason? Canadians are sending much less mail than in past years, a trend that is bound to continue.

Between 2006 and 2013, the volume of mail per address dropped 30 per cent even as the number of addresses grew by 1.3 million. The growing use of the Internet for communication and financial transactions will only reduce this further, Lee predicts.

Lee says ending door-to-door delivery should just be the start. “Is The Cheque Still In The Mail?” also urges Canada Post to: