Elites bungled their carbon-tax crusade because they don’t understand Canadians: Cross in the Financial Post 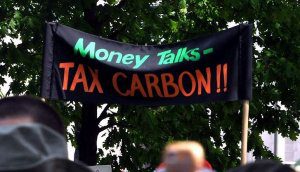 The campaign for the carbon tax bears a resemblance to that for the GST, writes Cross in the Financial Post.

A recent poll showing that a majority of Canadians don’t understand or have never heard of a carbon tax demonstrates the gulf between the largely academic-bureaucratic elite who push for this tax and ordinary Canadians. For nearly three years, pro-carbon-tax governments and groups, such as the EcoFiscal Commission, which released last week’s poll, have controlled the commanding heights of this debate with funding and media support the fossil fuel lobby can only dream of. They have nevertheless failed to parlay these huge advantages into public understanding and support.

The reasons the public has not rallied behind a carbon tax are clear enough. Promises that the carbon tax would be revenue neutral were quickly forgotten, revealing it as just another tax grab that offended people on the right. Their promised aim of reducing emissions has ended up coming up short because the carbon levies, where they were applied, were not enough to materially change consumption when crude oil prices were falling, disillusioning people on the left.

Carbon taxes also failed on the claim they would bridge the gap between the environment and the economy by creating the social licence to build a pipeline. In Canada, the final nail in their coffin was the election of a US administration uninterested in an American carbon tax (or any costly climate measures) automatically putting Canadian industries at a competitive disadvantage with higher energy costs but no prospect of lower global emissions, making the whole exercise both costly and pointless.

Academic initiatives such as the EcoFiscal Commission and the like-minded Sustainable Prosperity Institute operate in an echo chamber where the converted preach to the converted rather than connecting with the general population. Presumably, the hope was that if enough academics and government officials signed on to a carbon tax the public would somehow internalize it via osmosis. Instead, opponents to a carbon tax are poised to soon take power in Alberta, Ontario and, based on the latest polling, possibly federally.

The campaign for the carbon tax bears a resemblance to that for the GST.

The federal Liberal and the Alberta NDP governments plainly deserve the blame for failing to deliver on their promise that a carbon tax would buy social licence for pipeline construction, with the Kinder Morgan Trans Mountain expansion just the latest casualty (after the cancellation of Energy East and Northern Gateway). They naively argued the environmental fringe could be reasoned with, ignoring that professional eco-warriors are possessed by what conservative sociologist Peter Berger called “mob psychology, the mystique of the street, the rage against all institutions of liberal democracy, and, last but not least, the militant anti-reason impervious to argument.”

Say what you want about US President Donald Trump, but he quickly and peacefully ended the raucous protests against the North Dakota Access pipeline by showing he was implacably committed to building it, thus dissuading opponents from thinking their protests would produce the sort of dithering response they knew to expect from the governments of Justin Trudeau and Barack Obama. Four months after Trump took office, oil was flowing through the North Dakota pipeline, a visible demonstration to international investors of the difference in leadership between Canada and the US.

The campaign for the carbon tax bears a close resemblance to that for the GST. While value-added sales taxes like the GST are universally beloved by economists and bureaucrats as more efficient than income taxes, elites have never been able to convince the general population that a sales tax is either efficient or fair. Implementing the GST helped to nearly wipe out the federal Progressive Conservative party in the 1993 election. Stephen Harper won his first election for the reinvented Conservative party by promising to lower the hated GST, something he carried through despite the strenuous objections of Finance Department bureaucrats. As recently as 2011, voters in B.C. refused in a referendum to harmonize with the GST, while Albertans remain militantly opposed to any type of sales tax.

Popular resistance to tax reform erupted again last summer in response to the overhaul of small-business taxes proposed by Finance Minister Bill Morneau. The plan was another arcane academic exercise, backed by the University of Ottawa’s Michael Wolfson. Devising a tax scheme that seemed optimal in principle ignored the reality of how the tax would actually affect small businesses and farmers, a perfect example of what author Nassim Taleb calls the “Intellectual Yet Idiot” phenomenon in his newest book, Skin in the Game. Taleb notes that one of the distinct features of this type of advice is its complete separation from any consequences. Academics freely counsel naïve politicians, but when the plan meets opposition, politicians alone face the consequences in the court of public opinion — while their scholarly advisors quickly scurry back to their research.

Devising a tax scheme that seemed optimal in principle ignored the reality of how the tax would actually affect small businesses and farmers.

The 20th century saw democracy advance as a result of the increased willingness of the public to question the divine right of elites to dictate how our society is run. A sea change occurred after the First World War, when the mindless slaughter of millions of ordinary soldiers in the trenches of Europe made irresistible the working class’s demand for broader voting rights. As suffrage became more universal, elites have worried incessantly about so-called mob rule. Taleb wryly observes that when the population votes in a way condoned by the elite, it is approvingly called democracy in action; when they vote differently, the ominous spectre of populism is raised, never more so than after the election of Donald Trump.

That same hypocrisy is clearly evident in the debate surrounding a carbon tax. The enlightened economists and politicians insist that any opposition to taxing carbon is Neanderthal, climate-denying populism. Yet obstructing the pipeline it was supposed to facilitate is somehow socially responsible and so it goes unsanctioned.

Philip Cross is a Munk senior fellow at the Macdonald-Laurier Institute.

Developing an Effective Strategy to Remove Criminal and Security Deportees: Scott Newark for Inside Policy