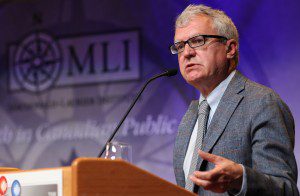 The Macdonald-Laurier Institute is highlighting its authors’ work on some of the major public policy issues going into this year’s federal election campaign. Today, John Pepall examines the case for electoral reform

OTTAWA, July 29, 2015 – When it comes to electoral reform, there are no shortage of ideas for how to change Canada’s electoral system. Proportional representation, mixed member proportional and appointing a commission to redesign Canada’s democracy are just some of the proposals floating around.

But what if the system is best left as is?

Macdonald-Laurier Institute author John Pepall says Canadians should be careful what they wish for during the upcoming federal election when it comes to changing our system for electing a government.

To arrange an interview with John Pepall, please contact Mark Brownlee, communications manager, at 613-482-8327 x105 or email at mark.brownlee@macdonaldlaurier.ca.

The paper says that calls for change often misinterpret our reason for voting in the first place.

A well-functioning democracy does not leave everyone thrilled with everything the government does, Pepall writes. Instead, he says, the point is to adopt a system that allows for us to collectively make decisions.

“Decisions must and will be made, and by voting, the people can decide who will make them, and who will uphold them”, he writes in the paper. 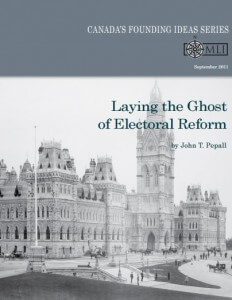 The problem with many proposals for reform, he writes, is that they will make collective decision-making more difficult.

Proportional representation, for example, is more likely to yield a minority government than a majority one. This not only complicates the government’s decision-making, it also takes influence away from voters and places it into the hands of bartering politicians.

“Under proportional representation, a multiplicity of parties are fostered and perpetuated, and who actually governs is decided after the election in negotiations in which the voters have no say and which they cannot anticipate when voting”, Pepall writes.

Pepall also argued against the motion “Canada’s democracy is in crisis” (Postmedia columnist Andrew Coyne argued in favour) as part of the 2015 Great Canadian Debates schedule.

He made the case that we should spend more time discussing the policies that our government should be pursuing and less time pondering how we make them in the first place.

“Those who fret about the state of democracy in Canada distract us from the real debates and risk denying us the ability to decide”, wrote Pepall as part of an op-ed in the National Post. “They would put our democracy at risk”.

John Pepall is the author of Against Reform, a 2010 book critiquing proposals to reform Canada’s electoral system.

Fullerton in Inside Policy: Reviving health care as an election issue