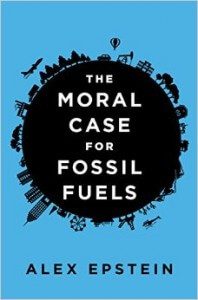 Celebrated author injects some much-needed balance into the debate about energy, the environment and the economy

OTTAWA, June 19 – For decades, we’ve been told that using fossil fuels is a self-destructive addiction that will destroy us along with our planet.

But using them has improved every measure of human well-being, from life expectancy to clean water to climate safety. Civilization has flourished in food production, healthcare innovation, communication, transportation, technology and much more.

To help Canadians better appreciate the complexities of fossil fuel use and the climate debate, MLI has partnered with eco-pragmatist.com to bring to Ottawa a part of a cross-country series of events.

On June 23 in Ottawa, author Alex Epstein will offer an impassioned defence of the importance of cheap, plentiful energy for both humanity and the environment, as part of a Canadian book tour for The Moral Case For Fossil Fuels. The book is an injection of balance into the lopsided debate about how we get our energy.

Eco-pragmatist.com is a venture by founder Leah Costello that was created to bridge the divide between those who advocate for the economy and for the environment.

“Living in Vancouver and working in many Canadian cities, I’m confronted every day by a major intellectual disconnect displayed by my urban friends and colleagues”, says Costello. “Many don’t understand that our amazing quality of life has been, almost entirely, made possible by the availability of inexpensive and reliable energy.”

Epstein hopes to help change the debate about fossil fuels.

His book argues that the moral significance of cheap and reliable energy is woefully undervalued in the court of public opinion. Environmental advocates tend to address only the downside of developing energy resources, without acknowledging the positive, life-enhancing benefits of fossil fuels and their decidedly unique ability to support a world of seven billion people.

Additionally, while it’s impossible for resource development to have zero impact and risk on the environment, we are seeing exponential improvements in stewardship and innovation that may one day provide practical and “greener” alternatives. How does the wealth created from using fossil fuels contribute to this? Given the considerations of both human and environmental realities, what is the impact on the environment and human progress if those innovation investments are curtailed?

Is it time to change the discussion from “either the economy or the environment” to one that includes a broader view and incorporates all needs, present and future? Drawing on original insights and cutting-edge research, Epstein argues that yes, the time has come.

This event, co-hosted by the Macdonald-Laurier Institute and the Curious Mind Group of Companies, is part of the “eco-pragmatist” movement. In addition to the Ottawa event, Epstein is also taking part in events in Toronto (June 19, 2015) and Montreal (June 22, 2015).

Alex Epstein started the Center for Industrial Progress to offer an alternative environmental philosophy to America, one that is anti-pollution but pro-development. A popular speaker on college campuses, he has publicly debated leading environmentalists. He lives in Orange County, California.

Alberta’s plan to raise corporate taxes will hit consumers too: Cross speaks to the Edmonton Journal

Education, a dearth of economic activity in remote communities holding back Aboriginals: Coates on CTV

Education, a dearth of economic activity in remote communities holding back Aboriginals: Coates on CTV