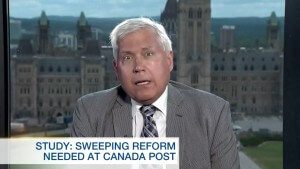 Lee is the author of “Is The Cheque Still In The Mail?”, an MLI paper that sketches out a roadmap to sustainability for Canada Post in an age where e-commerce dominates and Canadians are sending less mail than in past years.

Among his recommendations: Replace all door-to-door mail delivery with community mailboxes, reduce the number of days on which mail is delivered, franchise rural post offices, and eliminate Canada Post’s monopoly on mail delivery.

“We have to transition from a Canada Post that delivers letters to a parcel post company that delivers e-commerce to our door, and we have to do incrementally”, Lee told BNN.

Lee’s paper received extensive coverage in outlets across the country, including in the Toronto Star and the Winnipeg Free Press. Lee also did on-air interviews with more than 20 CBC Radio One stations across Canada, CBC TV’s The Exchange with Amanda Lang, Newstalk 610CKTB in St. Catharines and Newstalk 770 in Calgary.