Dissent from Within at the Supreme Court of Canada: 2015 Year in Review by Benjamin Perrin 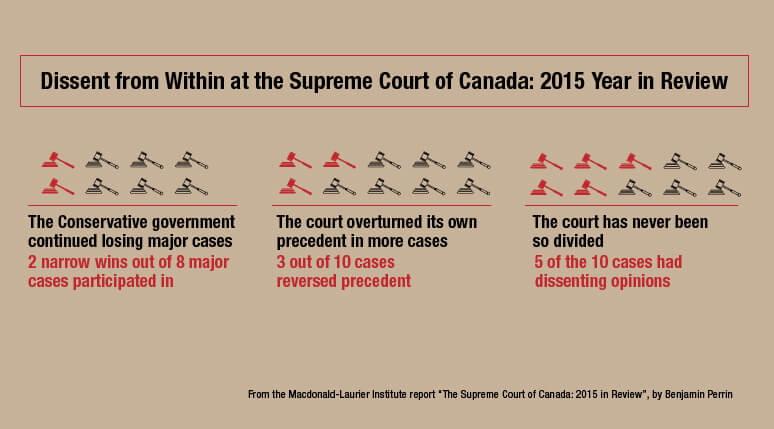 OTTAWA, Jan. 15, 2016 – Some striking new trends emerged from the Supreme Court’s major decisions in 2015, a new report from the Macdonald-Laurier Institute finds.

Perrin’s analysis examines the 10 most important cases the Court ruled on between Nov. 1, 2014 and Oct. 31, 2015. This includes several particularly significant cases, including decisions on: physician-assisted suicide, collective bargaining, freedom of religion, mandatory minimum sentences and damages for Charter violations.

In 2015, Perrin found, the former federal Conservative government won in only two of the eight cases in which it participated.

This losing record is substantially worse than historical trends for Charter litigation before the Court; on average, various levels of government have historically succeeded in 59 per cent of Charter cases.

It is, however, a continuation of the trend from 2014. That year, the Conservatives won only one of 10 major cases.

Included among the losses in 2015 were some major political and policy defeats. The Court helped derail the government’s agenda on mandatory minimum sentences, physician-assisted suicide, medical marijuana derivatives and labour rights.

An emerging trend is the Court’s willingness to overturn precedent established in previous decisions. 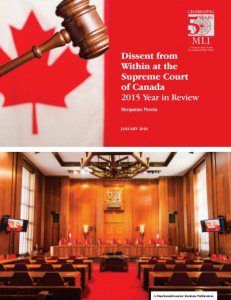 “While the Court professes to not lightly overturn its own precedents, it appears that the ability of Charter claimants to re-litigate decided constitutional cases has expanded in recent years”, Perrin writes.

This has led, Perrin finds, to some judges expressing discomfort about the Court’s willingness to turn its back on recent precedents.

Finally, the Court has never been so divided. Perrin finds that five out of the 10 cases examined involved judges writing dissenting opinions.

“What is even more interesting than the quantitative aspect of the rise of dissenting decisions on major cases in this year’s report is that they included at times blistered criticism of majority judges for allegedly intruding on Parliament’s policy-making domain”, writes Perrin.

This disunity was a departure from 2014, when there were dissenting opinions in only two of the 10 cases examined.

Benjamin Perrin is an Associate Professor at the Peter A. Allard School of Law, University of British Columbia and a Senior Fellow at the Macdonald-Laurier Institute. He previously served as Special Adviser, Legal Affairs & Policy in the Office of the Prime Minister and was a Law Clerk at the Supreme Court of Canada.