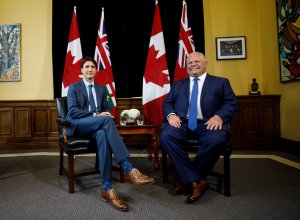 The best way to minimize intergovernmental conflict is to limit how much governments interact. It can produce big savings for taxpayers as well, writes Sean Speer.

The swearing-in of Doug Ford as Ontario’s new premier has led to plenty of commentary and speculation about the implications for federal-provincial relations in general and the personal relationship with the Prime Minister in particular.

That the two men are different is self-evident: they have different politics, backgrounds, and hair. Justin Trudeau is from Mars and Doug Ford is from Venus, to borrow from a classic relationship guide.

Competing ideas on carbon taxes and the financing of refugee resettlement are just the two highest profile manifestations of these different perspectives.

But their differences don’t necessarily mean there must be intergovernmental acrimony. There’s already some common ground – including a shared focus on the importance of NAFTA and possible room for collaboration on business tax competitiveness to keep up with the Americans – and there’s the potential for much more.

One area where there’s opportunity for big thinking and common purpose is what one might call “intergovernmental disentanglement.”

What do I mean by this?

Canada’s system of federalism has become complicated by a high degree of intergovernmental overlap and duplication. There are various examples – including federal and provincial Species at Risk Acts, duplicative environmental assessment processes, multiple (and sometimes conflicting) health and safety standards, tri-level funding and decision-making for infrastructure, affordable housing, homelessness, research and innovation, and so on. The list is long.

The result of this intergovernmental entanglement is diminished accountability, less scope for provincial experimentation or local preferences, and ultimately higher costs for taxpayers.

And these costs can be significant. An estimate from the early 1990s put the cost for the federal government at $5 billion alone. There are no similar estimates for provincial or local governments or for businesses and individuals who must navigate the different governmental regimes. But we can reasonably assume that the overall costs for taxpayers in particular and the economy in general are a magnitude higher.

The upshot is that disentangling the labyrinth of intergovernmental overlap and duplication would better serve taxpayers and the economy. There’s now a need and opportunity for a disentanglement agenda.

Such an agenda is highly consistent with Premier Ford’s hyper-focus on efficiencies and his overall theme about “for the people.” It may seem cliche, but it’s a truism that there’s only one taxpayer and so eliminating overlap and duplication even if it involves the province assuming sole responsibility for certain functions is still a worthwhile exercise.

It would also fit with a February 2015 speech by then-opposition leader Trudeau who said that “the federal government does not have all the answers” and warned of the risks of “a one-size-fits-all solution.” His government hasn’t upheld this principle on the carbon tax, but there’s room to remind him of it more broadly.

It’s time for an evidence-based, systematic effort to reform the functioning of our federalism. It must go beyond the usual ad hoc approach and instead establish guideposts to judge “who does what” in the name of accountability, localism, and efficiency. This may involve some uploading and downloading. But it will ultimately be guided by the overriding objective of disentanglement.

Ottawa and Queen’s Park are bound to disagree. That’s inevitable. The best way to minimize intergovernmental conflict is to limit how much the two governments interact. It can produce big savings for taxpayers as well.

How should NATO respond to Russia's challenge to European security and stability? New MLI report