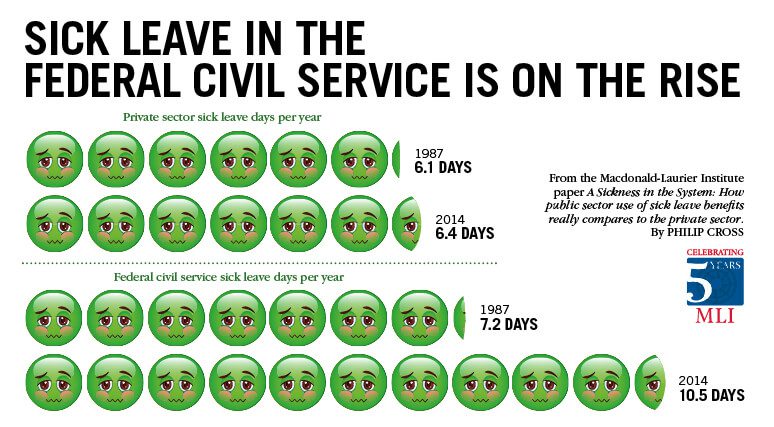 A new Macdonald-Laurier Institute report finds federal employees are calling in sick more often than their private-sector counterparts – and the gap is growing larger with each passing year.

“Both the level and trend of sick leave use in the federal government and throughout the public sector is troubling”, says Cross.

“The research suggests that the most important determinant of sick leave use is whether you are in the public or private sector, not your exposure to possible injury or illness in the workplace”.

To read the full paper, titled “A Sickness in the System: How public sector use of sick leave benefits really compares to the private sector”, click here.

By contrast, private sector employees took only 6.4 days on average in 2014. That’s basically the same as the average 6.1 days taken in 1987.

The problem, says Cross, is unlikely that federal employees are getting sick more often.

“The research suggests a primordial role for motivation and cultural attitudes in taking sick days, rather than biology and medicine”, writes Cross.

Cross points out that there are considerable differences in sick leave use between the private and public sector even when you look at individual industries, occupations and different federal ministries.

“The research suggests a primordial role for motivation and cultural attitudes in taking sick days, rather than biology and medicine”

The total number of leave days available to federal workers is staggering. Cross finds that a federal employee with 30 years of experience – when you factor in vacation, sick days and other forms of leave – can take 26 per cent of his or her working days off each year.

“Needless to say, no private sector employer could compete paying its employees to be on leave almost one-quarter of the year”, he says.

To Cross, it all suggests a sick leave system that is in desperate need of reform.

He recommends the newly-elected Liberals, who have promised to repeal the previous government’s changes to civil service sick leave, try to align these benefits more closely to what employees get in the private sector.

Part of this solution, he believes, needs to address ongoing problems with long-term disability benefits. As it stands now, only one-third of employees have banked the 65 sick days needed to access these benefits.

“This is clearly a risk for employees with little seniority who have not had time to accumulate significant sick leave benefits and for people with chronic but not disabling illnesses or injuries”, says Cross.

Going another round with the stimulators on the virtue of balanced budgets: Brian Lee Crowley in the Globe

Going another round with the stimulators on the virtue of balanced budgets: Brian Lee Crowley in the Globe